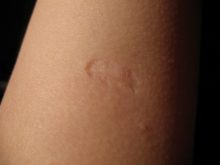 Felix R. Stetsenko is a first-year student at Amherst College.

You can tell from our left arms.  My brother’s features a prominent scar, evidence of a slipshod vaccination received in the dying days of the Soviet Union; mine is smooth, unblemished by the inoculation administered in a Florida hospital.  I’m the first and only American-born member of my family, a lucky “Amerikanets” raised on road trips, democratic politics, and chicken nuggets.  Yet I’ve also grown up a foreigner in my own house, oblivious to the quirks and memories that tie my parents and brother to Ukraine, a land of contradictions that tends to be in the news for the wrong reasons.

The transition from communism has rendered Ukraine increasingly unfamiliar even to the rest of my family, their imported mannerisms recalling a bygone realm of stable totalitarianism.  While they were busy learning that “how are you” is a greeting (rather than a question), our ancestral homeland was spawning recurrent revolutions and splintering along ethnic and linguistic lines.  Needless to say, my mother was less than thrilled when, earlier this year, I got on a flight headed in the exact opposite direction from the one taken over two decades ago by the rest of my family.

Arriving in America, they had been quickly absorbed by a tolerant, inclusive culture that found Russian-speaking neighbors as unthreatening as a Korean barbecue, Indian-American governor, or St. Patrick’s Day parade.  Touching down in Kiev, by contrast, I encountered a hard-bitten, forbidding world of scowling border guards, high-walled compounds, and convoys of humvees ominously rolling down the highway.  Wandering through the city my parents had been so determined to flee, I eventually came upon the “Maidan” – the square where bullet-riddled cobblestones and impromptu memorials attest to last year’s bloody uprising against the garishly corrupt former president, only the latest in a series of traumatic, scarring crises.

Ukraine’s scars are much more than skin-deep.  I sensed them in the tender longing of Yara, a girl my age who scours dating websites not for love, but for a ticket to the U.S. or Canada; I felt them in newspaper articles about estranged brothers, shouldering weapons on opposing sides of the civil war in the east; most of all, I saw them in the glazed look that came over family friends’ faces when asked if they had known any of the student revolutionaries memorialized in the Maidan.

The most recent chapter in a centuries-long legacy of blitzkriegs, man-made famines, and purges, this contemporary upheaval seemingly certifies Ukraine as a country defined by its scar tissue, its society too embittered – and its northern neighbor too belligerent – to allow for unity around any larger idea or purpose. The notion of overcoming the pervasive cynicism – much less transforming it into something resembling the American ideal – is a tall order, perhaps even naive. Clearly, history and geography have been less than benevolent to Ukraine.  Genghis Khan never pillaged New Jersey.

By the time my bags were packed for the trip back home, though, I noticed glimmers of resilience, improbable but undeniable: in my rambunctious grandmother, mischievously explaining her tactical approach to voting (“always the dumbest ones, they can’t steal as much”); in Kiev’s overhauled police force, staffed by earnest, unbribable recruits trained by the California Highway Patrol; in YouTube videos of Ukrainian soldiers who – stunned by reports of young protesters gunned down by snipers – defected and joined the crowds they had been ordered to disperse.

We all carry around indelible reminders, acquired at birth or along life’s journey, of everything from small-minded bigotry to estranged loved ones.  Not even America lacks for sordid stains, from Ferguson to Guantanamo.  The scars of the past, however, do not repudiate the promise of this country’s universalist ideals, any more than their birthplace negates my family’s Americanness, any more than a history colored by blood restricts the palette with which Ukraine can paint its future.