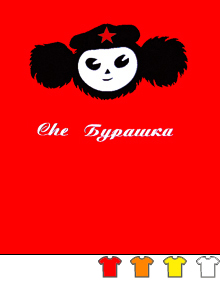 There is a lot in A Hero of Our Time borrowed from Western Europe, especially from Byron. Pechorin is, perhaps, a Byronic hero, and the Russian romantics read the English romantics. The rejection of enlightenment, the embrace of nature, and the dedication to an artist and the uncanny came from German-speaking Europe. So much of Pushkin’s language, and therefore literary Russian, comes from French.

Yet the Russians authors of the early 19th century appropriated these feelings and approaches to themselves, to their unique situations, and did so successfully. Lermontov’s novel feels original and unique, and wasn’t his insight into psychology borrowed back Western Europe at the beginning of the 20th century through writers like Tolstoy and Dostoevsky?

I don’t want to go too far with accusations, but some of the more progressive Russian culture comes directly from the West as in appropriated without a full understanding of the original. A successful contemporary borrowing is the Cheburashka-Guevara. Take the popular image of Che Guevara on t-shirts, combine it with the cartoon Hero of the Soviet Union Cheburashka, and you get this. A t-shirt we’d all be proud to wear.

The film title Stilyagi was translated into English as Hipsters. Stilyagi is a musical-rock-opera about young Russians of the 1950’s who tried to imitate American culture and smuggled in Russian music. The Stilyagi (from the word style) were a real phenomenon of the Soviet Union, youths who dressed in colorful, western style and smuggled in records etched into x-rays.

Much of the music in the film is actually taken from Russian rock of the 80’s, and it’s difficult to imagine Muscovites of 1955 walking around with such carefree attitudes in such bright clothing. SPOILER: at the end of the film, a black baby is birthed by one of the Russian girls, and her townspeople, rather than rejecting the baby, with roots of an obvious foreigner and embrace the child. This ending feels like something taken from an American film, one of many films touchy about interracial love.

In Stilyagi it feels completely inappropriate. As to the realism of the accepting of a black child in 1950’s Moscow, I don’t dare even try to guess what might have been. There would have been at least shock about the out-of-wedlock birth of the child. But the birth of a black child, something foreign, is some kind of metaphor. But a metaphor for what, exactly? It seems benignly lifted from American society, and made to be some kind of symbol of anti-soviet oppression through music. The scene is out of place, a borrowed organ rejected.

Though, in a story about borrowing of American culture, perhaps this event isn’t completely off.

The film takes a lot from Western musicals, musicals of rebellion, especially West Side Story. And it applies those techniques to a much more serious theme. In West Side Story, there is violence, but the police don’t take people away, never to be heard from again. In this way, Stilyagi is an excellent example of Russian culture’s appropriating something to suit its purposes. The style of an American film is borrowed and successfully applied to something more serious. Stilyagi, I should mention, has overall great production values and is a an enjoyable film.

Borrowed culture, without full cognizance of origin, is still pervasive in much of the hipster culture of Russia. This barber shop, for example, Chop Chop, tries to make something cool for the first time that most Russian men don’t even think about: a hair cut. A haircutter just for men is a foreign concept, and the appeal of this shop seems to be the rock-and-roll tattoos of the barbers, and the fact that all the important cosmetic and hair materials are imported.

Chop Chop is used as a product placement in this video by the hip-hop group COSMOSTARS.  I’m not really sure if I get the plot of the video but here’s my stab at it: a cosmostar is walking around with a picture of a girl he is looking for, and she has a picture of him. His hair is cut differently in this picture so he has to go to Chop Chop to get his haircut. She has a picture of him, but can’t recognize him with his big DJ headphones on, behind his big DJ case.

More than half the video takes place in Chop Chop, and thank god for cinema verite, the prices are prominently listed in the video. The cosmostar’s girl in the picture is a famous American actress who will be familiar to many, because she’s the kind of actress who stars in thousands of films, but about whom I would know nothing. Allow me to translate the refrain: I was sad. I didn’t like dancing. Then I learned about art. You came. You are a half a world. I’m half a world. Together we are an entire world. I am your Ken(t?), and you my Barbie. I break the beat for you. For you, it’s a hip-hop hit.

The last word on Chop-Chop: in the one near me, they have a Jagermeister machine.

The reason I’ve thought about this was because in a language test I passed a few years ago, my interviewer asked me if I thought if much of contemporary Russian culture was borrowed from the West. I had just read an article about a so-pronounced “FLESH MOP” that is, flashmob, in Moscow, wherein hundreds of people dressed up in pajamas to go to the movies. I’m not sure why they did this, and I don’t remember what film it was, but what was clear is that whoever organized this event, no doubt a PR manager, saw a Flash Mob on television or youtube, and appropriated it for his own using. Flash Mobs were meant as a protest, then as a comedy, and the grotesque re-wording to “Flesh Mop” makes it sound tasteless and dangerous. Tasteless and dangerous not only because of the gruesome pronunciations, but also that something which begun as a form of protest (like a sit-in) became a publicity stunt. Flash mobs occur often in and out of Russia. A flash mob postmodern terms detached from their origin of understanding and it doesn’t bode well for cultural health. People don’t see the words “flash”, “mob”, “flesh” or “mop” separately or even understand the meaning, but they have no problem using them.

This isn’t negative and Russian culture is still highly original. You never walk around a Russian city and think, wow, this is just like San Francisco! There’s nothing wrong with borrowing from other cultures, and there’s nothing wrong with paying 50 dollars to have your hair cut by a drummer at Chop Chop. Don’t get me wrong about that: I went to a similar place to Chop Chop in New York, where, coincidentally, the barbers were also Russian. God knows you’d pay more for that in the West Village. Russian musicians aren’t the best rockers, but they’re great samplers and DJs. The whole world is headed in the direction of sampling and appropriation, and Russia has been doing it for a long time.

And it cycles back. Lermontov borrowed from the west, and his psychology made it’s way into world psychology. Glinka attempted composing Russian music, which was russified and then re-westernized through Rimsky-Korsakov, eventually having a profound impact on 20th century music. Borrowing and bettering is still going on. If things remain popular for long enough, the history dims the influences and origins. Part of the reason much culture in Russia seems borrowed is that it’s new: whatever sticks for long time will become as quintessential as borsch, which I’ve been told is technically Ukrainian in origin.

So, when on Tuesday Mikhail Lermontov turns 199, ask him if he’s found something to occupy his time after all these years. He’s been at the Russian-hipster thing for longer than anyone. At first it may seem trite that he’s still got nothing to do but sulk around the Caucuses looking for trouble. But if we consider that he’s been doing it since the 1830’s, and it still hasn’t lost its relevance, then he deserves a moment our attention.