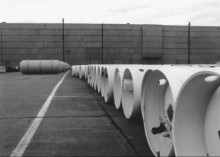 Elizabeth Zolotukhina received a M.A. from the Harriman Institute at Columbia University in 2013. She is an independent scholar.

Undetected smuggling of Russian nuclear material likely has occurred.[1] Terrorists have expressed interest in and have attempted to obtain nuclear materials.[2] The Russian nuclear arsenal is not uniformly secure. Given these facts, one would have expected Moscow to have collaborated equally and consistently with U.S.-funded nonproliferation accords. Instead, Russian cooperation with the then-current Cooperative Threat Reduction (CTR) initiatives had varied.[3]

U.S.-Russian nuclear security cooperation began shortly after the 1991 collapse of the Soviet Union. Fearing the possibility of nuclear theft[4] and the chance of diversion of former Soviet direct use nuclear materials to non-state actors, American officials originally envisioned the Cooperative Threat Reduction (CTR) program as an emergency measure to hedge against potential chaos resulting from the USSR’s collapse.[5] The Soviet Nuclear Threat Reduction Act of 1991 authorized a cooperative program of U.S. aid to former Soviet republics, including Russia. The CTR program, which expired in June 2013, represented one of the most successful examples of peacetime security collaboration between major military powers.[6]

After the expiration of the CTR umbrella agreement, more limited U.S.-Russian nuclear security cooperation continued under the auspices of a 2003 accord, the Framework Agreement on a Multilateral Nuclear Environmental Program in the Russian Federation (MNEPR), and a related protocol signed on June 14, 2013. On December 16, 2014 Russian officials announced, not unexpectedly, Moscow’s decision to terminate a large segment of nuclear security cooperation with Washington.[7]

Moscow’s varied cooperation with CTR initiatives is puzzling, as the threat of theft or diversion of select Russian nuclear assets has not abated. Instead, it has morphed. Rather than emanating largely from a lack of physical protection elements (i.e. adequate fences, radiation detectors, etc…) the current main threats to Russian nuclear materials are determined insiders, coupled with a questionable commitment by Moscow to ensuring sustainability and improving security culture.[8] These continuing lapses ease smuggling, leakage, and possibly could enable terrorists to divert select Russian nuclear materials. There is also a real threat—as well as past instances—of theft, seizure, or diversion of select Russian nuclear material. Once diverted, it would be relatively easy to construct, transport, and detonate a crude nuclear explosive device.[9] For a state-sponsored program, the difficulty in constructing a nuclear weapon lies first in legally acquiring the requisite nuclear material, and, later, in the miniaturization required to mount a nuclear warhead atop a guided missile. Terrorists and non-state actors are not bound by such considerations. Given the risks, it is crucial to ascertain the factor/s on which Moscow’s cooperation with U.S.-Russian nonproliferation initiatives hinges.

Most analyses do not attempt to address directly Moscow’s rationale for limiting engagement with nonproliferation initiatives. Rather, Russia’s contribution to a given program is assessed as insufficient and attributed to a disinterest in safeguarding its nuclear assets, or in nuclear security and nonproliferation, generally.[10] Arguments proposed by authors that do seek to explain the variance in Moscow’s engagement with nonproliferation initiatives can be divided into three categories: varying level of interest,[11] paucity or sufficiency of economic resources,[12] and the presence of bureaucratic incentives/disincentives.[13]

Moscow’s engagement in nonproliferation initiatives that aim to secure its most vulnerable nuclear assets hinges upon the existence of an economic incentive in the accord sufficient to overcome the otherwise unacceptably high economic, bureaucratic, and interest-based costs of cooperative nonproliferation programs. This is illustrated using two case studies. The first details Moscow’s involvement with the Plutonium Management and Disposition Agreement (PMDA). The second examines Russia’s engagement with the U.S.-Russian HEU Purchase Agreement. The two nonproliferation initiatives are similar in key respects. Not only are both initiatives part of CTR, but each accord aims to secure Russian nuclear assets most vulnerable to theft or diversion by non-state actors. Thus, the expectation is that Moscow would be most keen to cooperate equally with both efforts, but this has not been the case.

Although the two initiatives have encountered similar bureaucratic, economic, and interest hurdles, they have not been stymied to the same degree. In fact, one initiative has achieved its goals to date, while the other has stalled. The difference in outcome is explained by the presence of a sufficient economic incentive in the HEU deal which creates the mechanism necessary for Moscow to profit from the sale of the byproduct of the accord (LEU). The economic incentive in the PMDA, though present, is insufficient to ensure Moscow’s cooperation for three reasons. First, the payment for disposition of Russian plutonium provided by the accord does not reflect the market rate for the material. Second, the agreement does not grant access to previously inaccessible plutonium markets. Third, the accord does not facilitate the production of otherwise unavailable resources. As a result, the U.S.-Russian HEU Purchase Agreement is on track to be completed on schedule and within budget, unlike the PMDA.

The presence of a sufficient economic incentive motivates high-level Russian officials to overcome the interest, economic, and bureaucratic obstacles to program execution. Conversely, the absence of such a factor in select CTR initiatives obviates the will of Russian authorities to engage with such activities. Bureaucratic, interest-based, or economic explanations alone were insufficient to account for the observed variation, as all three factors were present in both cases.

More generally, the findings of this research point to the importance of including sufficient economic incentives when designing nonproliferation initiatives. Doing so would increase the probability of successfully completing nonproliferation accords in a timely and cost-effective manner. Proper incentives are especially important given the precipitous decline in U.S.-Russian relations following Russia’s March 2014 annexation of Crimea, the ongoing conflict in Ukraine, and Moscow’s December 2014 decision to terminate a large segment of bilateral cooperative nonproliferation programs with Washington. Finding creative ways to engage Moscow in securing its most vulnerable nuclear assets is crucial, since Russia’s commitment to nuclear security and sustainability in the absence of foreign funding is questionable.[15]

[3] Zolotukhina, Elizabeth. “Money Is Not Enough: The Role of Economic Incentives in Cooperative Nonproliferation Initiatives.” Columbia University Graduate School of Arts and Sciences. May 2013. 16.