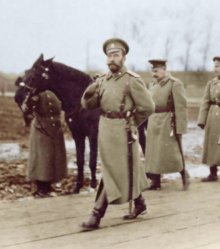 Steven Jug is a Lecturer in History and Slavic Studies at Baylor University whose research focuses on masculinity and culture in Russian military history, as well as the martial art Sambo.

Above: Tsar Nicholas II during the First World War.

The Great War in the Russian Empire, as in most of Europe, began with a traditional call to men to carry out their military duty, but quickly demanded more of them and, furthermore, required new contributions from the Empire’s women. Emerging values pertaining to masculinity certainly drew on prewar culture,  but analyzing combatants’ narratives through the lens of gender reveals that how soldiers understood their newfound status as members of a warring army; distinguished themselves as combatants; and questioned competing sources of duty changed dramatically in this period.

In memoirs, letters, and diaries, Imperial officers and soldiers consistently described their departure for wartime service as a major rupture. For instance, the first entry in the war diary of a non-commissioned officer known only by his last name, Shtukaturov, dated 27 June 1914, begins: “On the morning of my departure […] my sister Annushka came to visit me. After breakfast I began to say goodbye to her. My sister wept bitterly, and I tried to calm her down as best I could.”

The diary continues with a description of the evening before his departure, when “my mother, crying, blessed me with the icon of St. Nicholas the Wonderworker […] My wife burst into tears so much that I did not know how to calm her down. Our children raised a loud cry [after that].” Typical of such accounts is the impending absence of adult men and, relatedly, the women’s focus on the grief the mens’ departure causes rather than any honor associated with their service. Soldiers’ recollections thus reflect gendered mentalities, distinguishing home as a place utterly unlike the front.

For all that soldiers may have imagined home as a typically “feminine” space, most quickly learned that the front lacked either a uniformly masculine character or a universally male population. Count Nikolai Alekseevich Bobrinskii, for example, began the war as a cavalry ensign, and took the measure of his commander, Captain Sergeev, in the war’s opening months:

[T]he first time [he came] under fire from bullets and explosions, he could not stand it. After that, he began to receive continual official trips to the rear on regimental business, which benefitted the regiment because he carried out errands with his own money, being a rich man. I called him an honest coward because he did not hide his fear. Unlike the cowardly cowards, he neither talked about what, exactly, should be understood by true courage, nor decorated the walls with a collection of different weapons. He was a good family man and a delicate, kind person. I rarely saw him in the regiment.

In his judgment of Sergeev’s conduct as deficient, Bobrinskii offers insight into combatants’ expectations of their fellows, revealing that it was masculinity, rather than rank or adherence to protocol, that most defined them. Typically, the conduct of men condemned as cowards brought harm on others; Bobrinskii’s focus on the distinction between types of cowardice suggests he realized how rare his commander was compared to the “cowardly cowards” in the ranks.

According to Bobrinskii, the captain’s self-awareness enabled him to avoid endangering his troops and  allowed him to use his personal resources to improve their material condition. By noting that Captain Sergeev was a good family man (and just before calling him “delicate” and “kind,” a backhanded compliment), he clearly links Sergeev’s military effectiveness to his standing in terms of soldierly masculinity: Sergeev consistently sought orders that would take him away from danger.

Bobrinskii expects the reader to understand this crucial distinction between places at the front, such as on the line of fire, within the range of enemy artillery, or in a trench, as distinct from the support area of the front where rear echelon units oversaw logistics, medical care took place, and military personnel typically faced little danger. The regular possibility of encountering women in the Imperial Army’s rear echelon areas underscored the primacy of the frontline as the site to perform soldierly masculinity.

Ordered to cover the post of a vacationing captain, Ensign Os’kin arrived at his regiment’s headquarters in May 1915. There, Os’kin, like Bobrinskii, encountered officers from his own unit whom he had never seen at the front and noted the differences in conduct and affiliation engendered by their absence from the battlefield and failure to take part in shared hardship. Os’kin was especially struck by a certain Captain Vishnevskii, “a raucous, cheerful officer whose every thought is directed toward obtaining vodka and women. For a long time, Vishnevskii was treated for gonorrhea, got better, contracted it again, and now continues to go to the doctor for examination.”

The amorous pursuits that motivated Captain Vishnevskii not only highlight one possible role women could play in wartime life, but also provide a contrast with the trenches as an idealized homosocial male space reserved for fighters alone. Russian army combatants traveling to support areas after months in the trenches consistently presented the failings of character and conduct they witnessed there while ignoring or diminishing the service and labor behind the lines that facilitated their combat operations. By emphasizing the influence of women in support areas alongside men who were not only not fighting, but actively avoiding combat, these veterans’ writings suggest that rear echelon units were regarded as the army’s “feminine” element.

Later in the war, Imperial soldiers began receiving letters from home that undercut their commitment to the cause. Previously, soldiers had endured frontline hardships out of a general sense of duty and a  more personal desire to “defend my neighbors, my home, the fields, and the peace of my wife and children.” That equation began to change in the winter of 1916–1917, as news arrived of deteriorating conditions at home.

The “feminine” realm of home had become a source of hardship for its inhabitants, with continued service at the front threatening to aggravate a family’s difficulties. Men’s duty to their families thus came into conflict with duty to their country and their fellow fighters. A solider known only as Semyon, for instance, received word from his native Siberia that caused him to assert, in late December 1916: “we [in Russia] absolutely need to make peace. Firstly, because soon there will be no ‘will’ in the village [to keep fighting], [and] secondly, because the women are very free.” As the rest of his writing suggests, Semyon was especially concerned about the second of these two issues.

Semyon presented a new calculus of masculine duty that suggested enduring in a martial role until the Empire’s strategic situation improved might be too high a price to pay when filial duty demanded attending to threats of moral decline at home. Rather than propose a radical break from law, loyalty, or discipline, such letters may have represented a call to redefine masculine duty as defending the “feminine” home realm from the threat of decay. Flagging commitment to masculinist patriotism, alongside resurgent patriarchal peasant ideals, may have accelerated mass desertion and hastened the revolutions of February and October 1917.