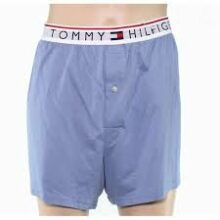 This is an event that demands more context, so I will explain: the boxer shorts appeared to be blue, extra-large, and made by Tommy Hilfiger.

Though the police officers who questioned him never gave a clear explanation of his alleged offense, it was presumably not sartorial. The Russian government may be increasingly authoritarian, but it has yet to issue an edict on the “boxers or briefs” question. Instead, the obvious but unspoken reason for this event had to do with one man: Alexei Navalny.

The fact that his name is not mentioned here is appropriate. Putin and his inner circle refuse to speak the opposition leader’s name aloud, as if he were some horrifying liberal combination of Voldemort, Bloody Mary, and Beetlejuice. If Putin looks in the mirror and says Navalny’s name three times in a row, his government might collapse.

Either that, or he might simply have Navalny killed. The underwear protest is part of the odd aftermath of his poisoning (sorry, “alleged poisoning”) by FSB agents (sorry, “alleged FSB agents”) on August 20 (sorry, “alleged August 20”). Navalny was poisoned with the nerve agent Novichok (“newbie”), an FSB favorite. Airlifted to Berlin, he survived, but anticipates a long recovery process.

On Monday, Navalny released a sensational video recording of a phone call with his alleged FSB assailant (Navalny used a spoofed FSB phone number and pretended to be writing an internal report on the op). The 49-minute video hilariously punctures the spy agency’s inflated reputation while yet again demonstrating Navalny’s skill as an Internet-era trickster. But the detail everyone focused on was the revelation that the Novichok had been applied to Navalny’s underwear.

The choice of a delivery mechanism was logical: the nerve agent would be absorbed into Navalny’s body once he began to sweat, probably some time after its application. But the mere mention of Navalny’s underwear seems to have turned the entire Russian-watching Internet into six-year-olds.

This is not a complaint, mind you. For one thing, the story seems to be a fitting end to the first year in modern history that made pants optional. But the silliness engendered by the story is also the point. Underwear is one of those things that everyone (or almost everyone) wears, and yet can easily be used for ridicule. This is the truth behind the ubiquitous advice to nervous speakers that they should picture their audience in their underwear: suddenly the people whose status and bearing lend them authority become just ordinary human bodies.

The philosopher and literary critic Mikhail Bakhtin famously and delicately argued that the lofty are so often ridiculed by focusing on their “lower bodily stratum.” Even the most commanding leader is less than intimidating when the throne on which he sits is made of porcelain.

One might expect the humiliation connected with underpants to stick to the man who wore them, but that is not the case here. Perhaps if he had died, Navalny could have been reduced to a story of a bizarre and embarrassing death. But he did not die. Instead, we are left with the image of FSB agents rifling through the man’s underwear. Navalny got the Novichok, but the FSB got the stigma.

The embarrassment does not stop there. Whether or not the chain of command from Navalny’s would-be assassin leads to the president, the stigma certainly does. Putin is, after all, an old FSB man, and even if the FSB were displaying unwanted initiative, the people involved had to assume that they were doing something that Vladimir Vladimirovich might approve of. And this is why the underwear protest is so brilliant.

Putin, after all, has cultivated an image of unrelenting machismo. [1] This is the man who declared that he would “rub out terrorists in the outhouse,” recommended that a reporter get a circumcision that might cut off more than intended, and turned his bare-chested physique into an international object of admiration and ridicule.

Putin’s phallic presidency, however, is a double-edged sword. While he famously compared protesters’ white ribbons to “condoms,” he himself has been the target of humiliating sexualized insults. In March 2014, Ukrainian soccer fans created a chant that became an anti-Putinist meme throughout the Russian-speaking world: “Putin–khuilo” (“Putin is a dickhead”). Netizens throughout the former Soviet Union were treated to images of Putin with a penis-shaped head (sometimes wrapped in a condom); musicians performed “Putin is a dickhead” songs, and Ukrainian astronomers even named a newly discovered star “Putin–khuilo.”

There is simply no good comeback to this sort of ridicule. Attacking it also entails repeating it, thereby doing the satirists’ work for them. There is no scenario in which a sentence containing the name “Putin” and the words “Navalny’s underwear” does the president any good.

So I would not be at all surprised if men’s underwear becomes a fixture of Russian protest in the coming year. What better response could there be when the security services and, by extension, the president himself, have been caught with their pants down?