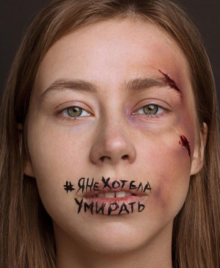 Above: Human rights activist Alexandra Mitroshina, one of two founders of the #янехотелаумирать campaign against domestic violence in Russia, poses with the movement’s slogan written across her lips in 2019. Source.

Valerie Sperling is a Professor of Political Science at Clark University.

Lisa McIntosh Sundstrom is a Professor of Political Science at the University of British Columbia.

The landscape of Russian civil society has changed dramatically since the heady days of the 1990s. Our field research comparing feminist activist groups in early post-Soviet Russia with contemporary feminist organizing reveals a pattern common to civil society movements throughout the post-Communist region – a shift from a trend toward professionalization and formalization of civil society toward informal activist organizing. Instead of a growing population of registered nongovernmental organizations (NGOs) with office space, paid staff, and the potential to develop into Western-style lobbying or advocacy groups, many Russian feminists today gather in unofficial assemblages that avoid registering with the state entirely. In short, from the NGO-ized civil society environment that existed in the 1990s and early 2000s, a new pattern of informal activism has developed, often assisted by the use of social media platforms. We find that the major drivers of these changes have been the steady narrowing of democratic freedoms in Russia, the exodus of foreign donors from the country, and the emergence of new online communication technologies available to activists.

While superficially, today’s Russian civil society may appear weak and disorganized relative to a powerful, coercive state, early post-Soviet civil society had its own serious structural problems. Yeltsin-era NGOs tended to be detached from the wider public within their own country, overly dependent on resources from foreign funders that insisted on groups’ formalization, and reluctant to engage in political protest. The primary reason for change toward informal organizing has been the massive exodus of foreign funding from Russian civil society over the past decade. Donors decided to shift resources to other parts of the world, and the Russian foreign agents law enacted in 2012 imposed significant financial burdens on any organization receiving foreign funding whose work the government perceives as “political.” The combined disappearance and undesirability of foreign funding has forced activists to become creative, whether through crowdfunding or avoiding the need for money altogether. New information and communications technologies have facilitated these changes and have enabled activists to reach potential constituents in ways that lower the barriers to protest while (sometimes) safeguarding participants from state repression.

What do these new forms of feminist activism look like? As in Western countries, with the rise of social media, the telling of personal stories has become a means of civic participation. In Russia, several viral social media hashtag campaigns about violence against women have emerged, somewhat parallel to #MeToo in North America. In one of these, “#янехотелаумирать” (“I didn’t want to die”), women submitted photos of the slogan written on their face or body along with makeup mimicking bruises or other injuries. This campaign, co-founded by human rights activist Alexandra Mitroshina and anti-domestic-violence activist Alena Popova, was designed to boost an online petition that Popova had launched on Change.org to demand that the Russian government adopt a domestic violence law. The petition gathered over 900,000 signatures.

Another social media campaign that began from one woman’s initiative began in St. Petersburg when Asya Senicheva’s social media account on VKontakte was selected by chance in March 2018 to have its content promoted by the platform for one week. The timing led her and her friends to create alternative feminist greeting cards to replace the traditional ones distributed on March 8, International Women’s Day. Their cards provided advice on “what not to wish [for women] on March 8” and offered alternative feminist greeting sentiments. The postcards went viral in Russia and garnered a flash of media attention for their author and for feminist ideas.

Another new feminist group, “Eve’s Ribs” (Rebra Evy), in St. Petersburg, is experimenting with a different direct outreach tactic, which is to open its doors to any interested women to spend time at their “Café Simona” (named for Simone de Beauvoir), which acts as a combination of support group, feminist consciousness-raising club, and shared workspace. While the group is not formally registered as an organization, one of its members, Daria Apakhonchich, was recently labeled a “foreign agent” under a provision of the newest version of the law that enables individuals as well as organizations to be designated as foreign agents.

Other new forms of action include connecting with the public face-to-face. This is a change from the earlier era, in which NGOs were widely criticized for failing to connect with citizens at the ground level of society. Many of these protests take the form of single pickets against the impunity of prominent perpetrators of sexual harassment and domestic violence.

In addition to these newer forms of feminist activism, a handful of Yeltsin-era feminist groups has persisted despite the constraints imposed by the Putin regime. The Moscow-based ANNA Center, a network of Russian crisis centers for women, founded in 1993 and labeled a foreign agent in 2016, maintained and even expanded its hotline services in the past few years. The Crisis Center for Women in St. Petersburg, founded in 1992, has likewise survived the Yeltsin and Putin eras, and holds regular events to educate people about violence against women, such as conducting trainings on what a non-specialist can do to help a woman in a violent situation. These forms of enduring activism primarily take the form of support for people who need help, which may be one reason why they successfully persist; they provide women with direct services, the demand for which has sadly continued unabated.

Like the newer forms of feminist activism, these groups make use of social media and organize events that engage with the wider public. Unlike the newer feminist groups, though, these “enduring” organizations are formalized; they registered with the state in the 1990s and have re-registered since then. But that formalization, rather than putting these groups on more solid ground, has in some ways made their status more precarious because they are fully visible to the state, and therefore more vulnerable to persecution. Also, these groups are in a challenging position because of their dependence on foreign funding to pay for their meager degree of institutionalization, such as maintaining an office and a phone line, and the risks attendant in being labeled a foreign agent. That label does not necessarily impinge on groups’ activism, however. Nasiliu.net (“No to violence”), a relatively new group combating violence against women, was labeled as a foreign agent in December 2020, but recently began a program to shelter battered women in hotels, supported by individual donations.

Some of Russia’s “enduring” feminist groups also engage in formal politics – making an effort to influence public policy. The ANNA Center, for instance, has spent decades trying to work through formal politics to get an adequate law passed on domestic violence, but to no avail. In 2019, however, despite its status as a foreign agent, the organization found itself working with the Russian government and the Council of Europe on a project to plan Russia’s “National Strategy for Women to the year 2022,” specifically in the area of domestic violence.

In short, we regard these changes in feminist activism as a microcosm of shifts in Russian civil society toward less formal types of organization. The most significant factor shaping this trend is the Putin regime’s repression of civic activism and the steady shrinkage of space for citizens’ political engagement since the mid-2000s. The other key factors are the decline in foreign funding, plus the foreign agent law, which together have significantly suppressed the formalized feminist groups that got their start during the Yeltsin era. On the positive side, however, this more repressive environment has led Russia’s new feminist activists to find creative ways of fundraising, to network with each other and engage in outreach to potential constituents, and to lay the groundwork for cultural change and the broader acceptance of feminist ideas.