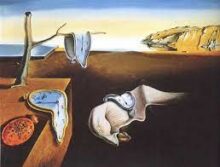 Eliot Borenstein is a Professor of Russian and Slavic Studies, Collegiate Professor, and  Senior Academic Convenor for the Global Network at New York University

If you’ve been following All the Russias for a while, you’ll known that I have occasionally hijacked it as a platform to share work in progress.  After writing Plots against Russia: Conspiracy and Fantasy after Socialism on my personal blog, I went on to blog the first draft of what used to be titled Russia’s Alien Nations.   Under its new title, Soviet Self-Hatred: The Secret Identities of Postsocialism, this book is currently being reviewed for publication after several attempts to turn my half-baked manuscript into something that I can proudly proclaim is now seven-eighths baked. For that project, I cross-posted from my personal blog to All the Russias.

I’ve started writing the follow-up, Unstuck in Time: On the Post-Soviet Uncanny, which will begin its serialization on eliotborenstein.net this Thursday.  All the Russias Editor Maya Vinokour has graciously allowed me to do some cross-posting again, but this time I’m going to spare you a year’s worth of spam from the Jordan Center. Instead, I will be posting the introduction to Unstuck in Time on All the Russias during the summer, a time when the blog is usually pretty quiet. After that, anyone who wants to continue reading this work in progress can find it on my website.

I never have a good elevator pitch for a book until I’ve completed a first draft, but let me give it a try.  Unstuck in Time is the second volume of the series that I informally call Russia’s Alien Nations (a title that will probably not appear anywhere but on my blog).  My plan is to explore fictional and ideological reconfigurations of time in the aftermath of the Soviet collapse.  Soviet nostalgia is a familiar part of the post-Soviet landscape, as is the  tendency for contemporary Russian literary fiction to focus on the past rather than the present.  Unstuck in Time argues that the way time is framed in contemporary Russian cultural productions is connected to a generalized dysphoria regrading the present day, which ends up feeling “off,” if not downright uncanny.

The first chapter is devoted to the immensely popular Russian science fictional subgenre of “popadantsy”—accidental travelers in time and space.  In their trips to the past, they inevitably get caught up in important historical events (most often WWII), usually in the hope of achieving a better outcome. What looks like simple nostalgia proves to be much more complicated; the accidental time traveller’s relationship with both his* home time period and the world in which he arrives is one of profound dysphoria. Both in the present and in the means by which he travels to the past, he exerts little agency over his own life.  Only in the historical fantasyland that greets him does he get to play the hero.

The second chapter examines the construction of fictional alternate Soviet Unions that either exist in the present day (because the USSR never ended) or are recreated in the future.  Subsequent chapters will be about fictional and real-life attempts to reconstruct the Soviet Union in our time (as theme park, overambitious film project, or literary experiment); the persistent representation of Russia’s future in decidedly medieval terms;  and possibly the Russian postapocalpse and the themes of timelessness and amnesia.

No doubt this will all change significantly over the course of the book’s composition; certainly, that was the case with the last two books I blogged. And some of that change will be the result of the feedback I get from readers, which has been invaluable to me over the past several years.

Posts will appear every Tuesday and Thursday on both All the Russias and here.  They should continue to go up twice a week once the introduction is complete, but only on my site.  If you want to get email notifications of new posts (particularly after the introduction is done), just send me an email at eb7@nyu.edu (I’m too lazy to renegotiate the Mailchimp/SquareSpace interface again).

If you’re not interested in the project (and, let’s face it, we have a big subscriber list—most of you are not interested), please just ignore the emails about new Unstuck in Time posts.  And if you are, I look forward to hearing from you.

See you on Thursday for the first installment, and on Friday for the Snickers portion of the Russian TV Commercials online lecture series.

*The protagonists are almost always male. I know you must be very shocked.