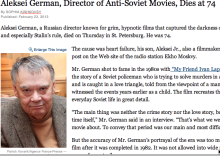 When acclaimed filmmaker  German, director of such classics as My Friend, Ivan Lapshin (1984) and Khrustalyov, My Car!  (1998) , died last week, the New York Times published an unsatisfying obituary with an appalling headline:  “Aleksei German, director of Anti-Soviet Movies, Dies at 74.”

What, you might ask, is wrong with this headline?  Better to determine what little is right about it: “Alesei German” “dies” and “74.” Admittedly, German is far from a household name in the United States (where insularity and the tradition of subtitling make foreign films only marginally more popular than opera or haggis).  But if the paper is going to bother to include an obituary, the assumption must be that a segment of the readership already cares about the recently departed.  To anyone who has watched a single on of his films, or given more than a few minutes thought to Russia and the Soviet Union, the Times’ headline is an astonishing over-simplification.

The text of the article is equally problematic, particularly when dealing with German’s now-unfinished last film.  Characterizing the Strugatsky brothers’ novel Hard to Be a God as an “allegory about the Stalin era set on another planet” is painful enough to read without being informed that the book is”now interpreted as an allegory about the Putin era as well.”  The assessment is primitive, to be sure, but it commits an even greater offense to the Strugatskys by making their work sound so dull.

The main problem is, of course, the term “ant-Soviet.”  First, it is reductive:  one gets the impression that German’s films were political diatribes whose sole function was to criticize an oppressive regime.  If this were the case,  few in or outside of Russia would care about his work now, as it would have become irrelevant.

Second, it sounds as though the headline were written by an apparatchik writing for Pravda thirty years ago.  This is perhaps the greatest irony here: there is nothing more “Soviet” in the sense used by this headline than summing up a complex set of attitudes and artistic strategies as “anti-Soviet.”  In the Soviet context, such an appellation would have been tantamount to impugning German’s patriotism.  When Noam Chomsky passes away, will the Times obituary read “Anti-American linguist dies?”

Finally, the headline fails to recognize that “Soviet” has become primarily a period term.  By this logic, whatever his views, German, as a director living in the USSR, was a Soviet director.  But the USSR has been gone for over twenty years now, and German died last week, while still at work on his next project.  Couldn’t he have simply been a “Russian” director?