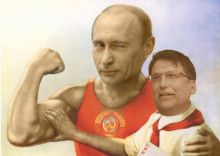 It’s college admissions season. With the recent passage in North Carolina of the “bathroom bill” that enables discrimination against LGB and especially T individuals, the upcoming academic fair for students admitted to Davidson College opens an opportunity to reiterate that #WeAreNotThis. Although there is some validity to labeling North Carolina a pioneer in bigotry, there is significant pushback against the sweeping new law from individuals and corporations based in the state. Even if there won’t be any teenagers willing to ask about House Bill 2 in front of their parents and prospective professors, they will know that as a private college, Davidson is unaffected by the law and that the college’s president stands unequivocally against discrimination because of gender or sexual orientation. (In contrast, the chancellor of UNC Chapel Hill is exceptionally vague on the matter.)

At the same time, my task of representing my home Department of Russian Studies at the Decision Davidson 2020 fair has become ironically fraught. My plan to talk about the enduring beauty and lasting impact of Russian culture globally has suddenly acquired a new perspective: the striking similarity of political maneuvering in Moscow and Raleigh. Much like the Russian parliamentarians who in 2013 swiftly passed the infamous law banning “propaganda of non-traditional sexual relations to minors,” NC conservative legislators demonstrated amazing expediency in adopting the anti-LGBT law.

In both Moscow and Raleigh, the legislative haste is justified by an urgency to relieve children of an imminent threat, reinstate “basic community norms,” and curb an excess of political correctness. The underlying assumption in both cases is that LGBT individuals are potential perpetrators: they corrupt children not least by threatening the cherished gender binary. A man and a woman should find themselves together in a marriage, not in a bathroom. Besides, those who identify with a gender different than the one assigned at birth and are attracted to members of their own sex or gender stand in the way of making America and Russia great again.

Russian President Vladimir Putin has plenty of sympathizers around the world and in the U.S.

While it would be a bold move to publicly come out in the United States as a Putin supporter after the annexation of Crimea and the war in Ukraine, the President of Russia seems to be a formidable model for some conservative politicians. In particular, North Carolina Governor Pat McCrory may not be as good at riding horses topless, swimming in Siberian lakes, and flying with cranes, but his ability to bend logical reasoning almost matches Putin’s.

In an interview with Charlie Rose last year Putin managed both to present himself as a champion of gay rights and to defend the anti-gay bill he signed into law. “The problem of sexual minorities in Russia had been deliberately exaggerated from the outside,” he stated. Just like Putin would, Gov. McCrory has brushed aside any criticism of HB2, dismissing it as “political theatre,” a “national campaign of distorting the truth” aimed against the “basic common sense bill.”

Whereas Putin blames the West, McCrory faults the “national media”: both serve as insidious forces plotting to destroy the last remaining island of common sense. Yet, so little “common” remains of that common sense. HB2 was framed as a response to a city ordinance in Charlotte that expanded protections based on race, religion, gender, and age to gay, lesbian, and transgender individuals. Speaking from a position of power and inherited privilege, Gov. McCrory insists that he and the NC General Assembly “have not taken away any rights.” In other words, unlike the rest of the progressive world, Gov. McCrory does not think LGBT equality is a core human right.

In a self-congratulatory statement released following the signing of HB2, McCrory chided Charlotte’s mayor and city council for what he saw as “government intrusion and overreach.” But it appears that the governor, who both wants to limit the state’s influence and reinforce that influence, wishes he had the power (and perhaps the judo skills) of Vladimir Putin. Unlike Putin, however, McCrory does need to worry about reelection.