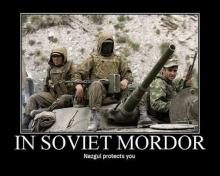 Like many a reclaimed epithet, the identification of Russians with “Orcs” shifts its valence depending on the speaker.  That is, when a patriotically inclined Russian such as Kalashnikov or Elizarov claims the Orc mantle for his people, the term is, overall, positive (even if it might also contain multiple layers of irony).  Out of the mouths of non-Russians, or of Russian liberal critics of Putinist politics, “Orc” remains a fighting word.  And, as Pelevin’s wordplay suggests, the “Orc/hobbit” paradigm is not merely a metaphor for bilateral East/West tensions; Orcism has taken on a new life since the annexation of Crimea and the fighting in Ukraine.

Earlier I compared the Orc with the “Sovok”, the yokel who embodied stereotypes of Soviet “backwardness.“ Both terms are negative projections that can nonetheless overcome their origins in abjection: the savagery of the Orc is transformed into a primal strength, while the ridiculousness of the Sovok can still be tinged with an ironic affection.  Unlike the Sovok, however, the Orc is not a symbol of a multinational Soviet state.  Thus its true identity is up for grabs.

Since the outbreak of hostilities in Ukraine, “Orc” has evolved further:  now the Ukrainians are “ukropy”, while the presumably savage, warlike Russian invaders are, of course, Orcs.  In the aftermath of the Eye of Sauron fiasco, Leonid Bershidsky recalled that, as far back as 2012, his colleagues in Kiev joked that Ukraine was “Much like [the] Shire, the hobbits’ home country, while Putin’s Russia was Mordor, working its evil magic on the bucolic land.” He inevitably compares Putin to Sauron, and notes that the Russian president’s “repressive machine is run by orcs.”

Not to be outdone, Ukrainian hackers hijacked Google Translate in the early days of 2016, adding a distinctively Orcish twist to the Ukrainian-to-Russian translation function.  The Ukrainian words for “Russian Federation” became “Mordor” in Russian, while Foreign Minster Sergei Lavrov’s last name became “sad little horsie.”  Google promptly fixed these “errors,” but if there was damage to be done, it had been done already.  On the scale of Russian/Ukrainian conflict, this is small potatoes, but it is appropriately Tolkienist:  The Lord of the Rings was just as much an exercise in philological imagination as it was in faux medieval mortal combat. [1]

The connection between the Russian Orc identity and the war in Ukraine inevitably colored both the outrage and schadenfreude associated with the Eye of Sauron fiasco in Moscow.  Alexandr Nevzorov, the former nationalist Soviet television broadcaster turned anti-clerical gadfly, invoked the Eye of Sauron in his review of the new Hobbit as an opportunity for pointed political commentary:

Of course Jackson’s Tolkienist epic is yet another blow to the whole ideology of the “Russian world’s” “unique” essence. Phenomena of such a scale as The Lord of the Rings: The Hobbit, having accumulated and partly cultivated the examples of European aesthetics is, as a rule, merciless towards the accomplishments of the natives. They simply squeeze them out and successfully replace them.

Russia and it’s “great culture” once again had nothing with which to resist Tolkien’s gnomes.

The appearance of The Hobbit in Russia contains only one riddle: why did the priests, Black Hundreds, and other commissars of official spirituality make such a scandal out of the Eye of Sauron over Moscow?

The patriots should have overcome their culturological timidity, taken the reins of the situation, and used the image of the Orcs for the successful propaganda of their ideology.

After all, it is the Orcs who, like no others, have demonstrated their capacity to give their all in the service of the military industrial complex.  They are ready to die on the field of battle by the thousands, unthinkingly and joyfully.  No doubt their portraits would be the best visual aids for military-patriotic preparation classes.

Moreover, it is the Orcs who embody politeness in the sense that the Russian Federation now understands the word. [2]

The Tale of the Russian Orc is more than simply a chronicle of the Russification of a Tolkien meme.  It is the tale of a national, ideological emplotment based on a set of resistant, paranoid reading strategies:  The Lord of the Rings  becomes available at a key historical moment, and it is such a powerful narrative that Russian audiences find their own story encoded within it.  The outlines of this story are, by the 1990s, sadly familiar:  an Evil Empire has been thwarted by the forces of good.  A Russocentric reading of Lord of the Rings would have to be self-hating, at least in the initial stages; but a resistant interpretation of the book gained popularity at the same time as resentment of the so-called forces of good (the US and Europe) increased.

Just as the once-earnest perestroika refrain “Запад нам поможет” (The West will help us) could only be uttered with bitter irony, Lord of the Rings showed some Russian readers just how devastating Western help could be.  But the greatest irony is the one that always surrounds Russian ideological rejections of the West:  the Orc identity imagines rejection by the West, only to turn the Orc into an imaginary weapon against the West.  But the vocabulary employed was nonetheless developed by an eccentric European, dreaming his Elvish dreams in a study in Oxford.

Next: Salting the Earth

[1] Other online examples include a 2009 LiveJournal post entitled “Russian Orcs are to blame for everything” (https://urb-a.livejournal.com/12371043.html), referring to “Orcs from the neo-fascist Putin’s reich”; a 2106 Livejournal post called “Russian Orcs have destroyed a monument to the innocent victims of the NKVD” (https://oleg-leusenko.livejournal.com/4594450.html); and a pro-Putinist open letter to an ethnic Georgian Russian media figure accusing her of Russophobia: “Putin = Voldemort, Sauron, and Darth Vader in one convenient package?? (I’m copyrighting that)” (http://xn—-ctbsbazhbctieai.ru-an.info/новости/ответ-тине-канделаки-на-русофобские-заявления-иди-на-все-четыре-стороны/).

[2] Intentionally or not, Nevzorov’s review echoes some of the discussions about Orcs in the Russian blogosphere.  For example, a Minnesota-based Russian-language blogger calling himself “Govrin” wrote a post call “Russians are Orcs” back in 2009, in which one of his many arguments for equating the two groups centered on their military skills and tendency toward expansionism.  (http://gorvin.diary.ru/p62909272.htm?oam#form)