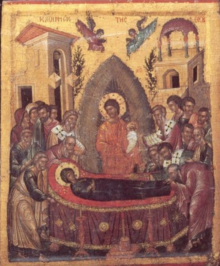 Above: An icon depicting the Dormition of the Mother of God.

Dr. Anca Șincan is a researcher at the Gheorghe Șincai Institute of the Romanian Academy. She holds a PhD in history from Central European University, where she specialized in religion in communist Romania.

In the introduction to her book Castration and the Heavenly Kingdom: A Russian Folktale, Laura Engelstein took the reader through archives containing the story of the Skoptsy sect, who practiced ritual castration from its inception in the eighteenth century to its demise in the twentieth, titling them “archives of eternity.” Paradoxically, the archives of very institutions charged with destroying this community ended up preserving their history in perpetuity.

Other researchers, like James Kapalo, noticed this same paradox at play within the archives of the secret police. In their effort to curtail the clandestine practice of religion, the secret police produced a thorough database of names, places, biographies, activities, and networks. It created one of the most important extant collections of religious literature — in many cases, that literature is only preserved in these archives. Since documents on these minorities were rarely collected in other state archives, the secret police became an inadvertent producer of history. These histories, however, are often what Alison Lewis called “hostile histories” that distort reality to fit the final objective of the secret police — the destruction of the targeted communities. How can a historian separate history from its “hostile” counterpart? Should these documents be read as texts that rewrite reality? Should they be discarded altogether?

It is at this point that my own research story begins, with the question of what happens with these secret police-archive histories when the communities in question still exist? Under current Romanian law, only researchers and “supplicants” (those directly surveilled by secret police or their families) can access the secret police files. Of these groups of individuals, only researchers can get access to the file in its entirety, whereas supplicants can view only those parts of the file that are strictly about them. If the document is requested for copying, it is often “sanitized” — that is, subjected to blacking-out of any material pertaining to private life. Otherwise, researchers, like the secret police officers who preceded them, have access to all parts of the file.

A few years ago, I interviewed members of the hierarchy, clergy, and larger community of believers within the Old Calendarist Romanian Orthodox Church in an effort to acquaint them with archival findings about their group. These meetings came to pass when our research team was contacted by Fr. Ghelasie, a member of the Old Calendarist Church, after I uploaded two stories on an underground monastery called the Dormition of the Mother of God on the Hidden Galleries project database.

Fr. Ghelasie, a young monk, was intrigued by our interest in the history of the Bucharest Old Calendarist community around the Dormition of the Mother of God, but also curious about other archival materials we discovered while researching the secret police files on the Church. We planned to meet Fr. Ghelasie and a few other Church members to discuss our findings. The project’s ultimate goal was to bring the materials and documents that we found in the archives into the community and offer a view (however twisted) into their past, as it was preserved by the secret police. We’d hoped not only to place the community face to face with their recent past, but also to possibly correct the image the secret police had created of them during the communist regime. Furthermore, because our project sought to recover objects and materials that the secret police had confiscated during sweep-up operations, we were also aiming to provide members of formerly underground religious communities with an opportunity to reunite with their lost belongings.

In the case of the Bucharest monastery, the archival findings took an interesting turn that imbued our contact with the community with even greater significance. Along with the usual books, icons, religious texts, and paraphernalia, the secret police had also confiscated a body — that of Bishop Evloghie Oța, whom secret police disinterred and reburied in a new location that remains unknown to this day.

The first meeting, which I had originally set up with Fr. Ghelasie, ultimately involved not him but the young Bishop Evloghie of Sibiu and Fr. Martinian, the abbot of a monastery in Șelimbăr. At that time, I was just starting my research into the archives. I had already begun looking into Bishop Oța’s file and was prepared to offer information on the few findings we had on the history of the Monastery in Bucharest. Yet the timid questions of my two interlocutors focused mostly on my interest in their history. Was I myself a believer? Was I an Old Calendarist? Why did their history concern me? Who were my parents?

Only at the end of the interview did they ask the question that most interested them: had I found anything in the file concerning the location of the late Bishop Oța? Unfortunately, the file, which contained five volumes’ worth of surveillance on Bishop Oța and the Bucharest Old Calendarist monastery, offered few clues as to his body’s whereabouts. However, it did include a large number of correspondence to and from the monastery — correspondence the secret police intercepted at the post office, where it was copied and sent on its way. The significance of the intercepted correspondence would reveal itself later; my first meetings with community members were solely dedicated to the whereabouts of the body.

Upon reading several letters that the secret police attached to the file, I discovered that a good part of them were confession letters. Since the Old Calendarist Orthodox Church was illegal during the communist period, most of its clergy was restricted in its movement. Stationed in just a few centers, they continued to spiritually advise their communities across large areas of the country through remote means. Because of the distances, and the impediments to their movement, some of the orthodoxy of praxis was bypassed. Innovations were introduced. In this case, contact between confessor priest and believer occurred via postal mail, with confession taking a written, epistolary form.

Forced by the political context, the practice was also problematic in itself, since confession should happen during a face-to-face meeting with the confessor and through spoken words. As Catherine Wanner has established, under totalitarian regimes that force religion underground, enforced secrecy heavily influences religious practice, from attendance at ceremonies to canon and doctrine. Her term for instances where the political context spurs change in orthodoxies of faith and praxis is “hybridity of religion.”

This term aptly describes the “confession” letters appended to the bishop’s secret police file. In the 1970s and ’80s, the bishop of the underground community was a sought-after spiritual advisor. Most of his spiritual sons and daughters confessed their sins in letters when they could not meet in person. According to church canons, confession is a personal and secret conversation between a priest and a believer. To break the secret of confession — whether intentionally or through negligence — is a violation on the part of the priest, for which he must be deposed.

If, even by chance, someone hears your confession, the secret of confession binds the accidental listener as well. The second volume of the Oța file had tens of such letters that preserved confessions and replies to them, secret conversations that, once opened and read by outsiders, broke the confession seal. My follow-up meeting with members of the Old Calendarist community was dedicated to this archival find. Two amateur historians from the community joined the meeting, where I described my findings of the files with several examples. When I attempted to show them the letters, they turned their backs to the image and asked me to close my computer, careful not to violate the secret of the confession — even all those years later.