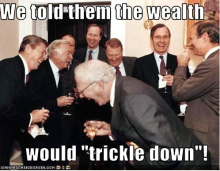 The information revealed in the Panama Papers is shocking, and the Guardian led that morning with an investigation into the dealings of the people and companies surrounding the Russian president and the Icelandic Prime Minister. When the latter resigned, we could safely store away our worst nightmares in Moscow, because, Sure, we have problems, but thank God our president is not a thief. I am a firm believer in teaching with games, and I offer the first “All the Russias News Quiz.” See how many you can get right, but the answers depend on the skills of your accountant.

1. Which of these territories allow politicians to receive millions of dollars from extremely wealthy persons and enterprises, which in turn explains laws very favorable to tax avoidance by extremely wealthy donors?

2. If you need a shell company with the aim of paying few or no taxes, you’ll be impressed by the attractiveness, simplicity, and opacity of

a. Panama, where your dealings may be made public by the Guardian

b. Delaware and Wyoming, where it is perfectly legal so there is nothing to expose

c. Real estate in New York and London, no questions asked, unless you buy in the one Manhattan building unlucky enough to be investigated by the New York Times, though even then there will be no consequences but we’re satisfied that we spoke truth to power

d. Greece, where the Troika has given new meaning to “transparency,” and where anyone will tell you to move your money to Delaware, Wyoming, Luxembourg, or Switzerland

e. Russia, where anyone will tell you to move your money to Delaware, Wyoming, and real estate in New York and London

3. Which of these territories shows the highest ratio of income inequality, made possible by “business friendly” tax laws, with institutions that are entirely unelected and thus authoritarian?

4. In which of these countries do billionaires pay at a lower tax rate than their secretaries, often at an effective rate of 15 percent that looks a lot like a flat tax?

5. Which of these territories bailed out the very banks that caused the economic crisis of 2008, only to see those banks post high and record profits in the years to follow aided by “rationalized” tax laws?

6. Which of these territories deregulated banks, made possible the financial crisis, and then transferred the bad bank loans to the national budgets, therefore creating the argument for austerity while those with a lot of money still benefited from tax loopholes and saw their incomes rise while all others stagnated or fell?

7. In which of these territories has austerity been practiced more or less unremittingly since 2008, in all or some of its territory, which has left the very wealthy even wealthier in comparison with 99 percent of their fellow citizens?

8. When the first revelation in the Panama Papers is that the Russian president has secreted away 2 billion dollars, you should feel

a. vindicated, because in the USA wealth is secreted away by every millionaire except the president

b. relieved, because the problem lies with one man

c. more sure than ever that the problems of income inequality and illegal shirking are Russian problems, not ours

d. you can’t think about that now because you are too busy filling out your income tax return due next week, where your effective rate is likely to be higher than those of Mitt Romney, Donald Trump, Warren Buffet, and just about any millionaire or billionaire in Russia, the USA, the UK, or the Eurozone

9. When you are shocked by how much tax you are paying compared with very rich people, you should

a. enter government in Russia and steal state wealth

b. get rich in the USA, buy a senator or president, establish your own Superpac to suit your tax needs, and give it an Orwellian name like “Americans for Economic Equality”

c. hire David Cameron’s father to set up a shell company in the British Virgin Islands, while his son practices fiscal violence on the rest of the UK population

d. wish you had studied economics at MIT so you could work for Goldman Sachs, run a central bank in Europe, and recommend austerity for everyone except people who worked for Goldman Sachs and its equivalents in the USA, the UK, and Russia

e. have been born heir to a baronetcy, attended Oxford, carry around a quaint red and battered briefcase with the latest government budget, and think it really funny grammar to say that everyone else should “tighten our belts” and “live within our means”

10. The most sensible explanation for global inequality, global tax evasion and avoidance, global wage stagnation, and extreme wealth hoarding all over the world is

b. Putin’s invasion of Crimea and his staged discovery of a Grecian urn not far away

11. When reading about the uniqueness of Russia, the right reaction is to feel

a. that you are the only sane person left on earth, which means you’ve gone mad

c. that Soma should have been a real drug

d. that as bad is it may get, at least I know I’m free

3. Technically only (d) because the Eurozone has absolutely no elected institutions, unless by unelected you mean the Fed or the Bank of England. It cannot be Russia because Russia’s central bank is beholden to quasi-elected institutions.

4. Technically only (b), because in Russia it actually is a flat tax.

5. All of them, though the stupendously high profits pertain to (b)

11. (a) and (b); (c) was a trick because there is a drug called Soma in one of the weird cases of life imitating art. Hard to say about (d) but my colleagues in the social sciences are modeling it as we speak.