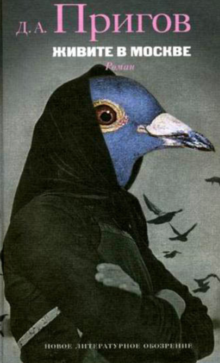 Victoria Buyanovskaya is a Moscow-born second-year graduate student at the University of Wisconsin-Madison, where she studies the intersection between literary and memory studies and late- and post-Soviet culture and politics.

There is a disturbing episode in Dmitri Prigov’s novel You Should Live in Moscow (Zhivite v Moskve, 2000), a phantasmagorical memoir narrating Soviet trauma primarily through the stories of Moscow monsters and ghosts. A Leviathan-like woman, the gigantic incarnation of the Motherland from wartime propaganda posters, makes pancakes out of the bodies of Soviet citizens. Because her own amorphous body is comprised of the same material, an indistinct human “dough,” it becomes problematic to reduce this image to an allegorical representation of state violence, and nearly impossible to distinguish between the perpetrator and her victims.

For many of us who feel complicit—through language, citizenship, or background—in the crimes Russia is carrying out in Ukraine right now, it feels necessary to reassess the metaphors we have been using in discourse and fiction. Do the figures of power that these metaphors represent preserve and prescribe the status quo (which does not even seem to be “just” a status quo anymore)? Perhaps it is possible to read them as imaginary “scenarios” or even as embodied, lived experiences that reconfigure themselves as soon as they are performed, casting off previous models and leaving behind space for reflection.

I will illustrate this possibility by examining You Should Live in Moscow, an uncannily relevant novel by probably the most significant Russian unofficial writer and artist of the late Soviet and post-Soviet periods. Though its genre is nominally autobiographical, the novel’s narrator immediately liberates himself from any commitment to telling the truth. Any attempt to remember and chronicle his personal, still less the collective past, is bound to fail, motivating only outbursts of phantasmagoric imagery. If there is an experience that the novel conveys, it is that of “un-witnessing” history.

The novel’s autobiographical “nucleus” contains an effective metaphor for this condition: the narrator’s paralysis, provoked by a bout of polio—a disease the real-life Prigov in fact suffered in childhood. Throughout the text, the narrator keeps trying to articulate the story of his illness, but, when it is finally told in the final chapter, it turns into a powerful metaphor of failure, the ultimate collapse of remembrance, witnessing, and narration.

The chapter is centered around an incident that takes place in the Moscow Metro during the late-Stalinist anti-Semitic campaign known as the “doctors’ plot,” as seen through the eyes of a Jewish boy whose father is being humiliated by two drunkards. Crucially, the performance of violence not only features the figures of victim and perpetrator, but also situates their behavior within a multi-layered structure of spectatorship, laying bare the complexity of witnessing, complicity, and collective guilt. The audience remains technically uninvolved, yet follows the “show” from a position of apathy and virtual paralysis.

The story of the anti-Semitic attack concludes with a discussion conducted after the fact in the narrator’s family, which ends up divided on the “Jewish question.” One relative exhorts the family to heed the anti-Semitic arguments of the authorities, persuading even the narrator’s mother. A victim through his identification with the Jewish boy and a perpetrator through his belonging to his own family, the narrator is almost literally torn apart, which causes his definitive paralytic stroke.

The experience of “regarding the pain of others,” as Susan Sontag titled her groundbreaking 2003 essay, proves to be annihilating. The narrator’s bodily “catastrophe” reproduces the self-destruction of the collective body, culminating in a stasis that perpetuates the damage. In a novel pervaded by the grotesque, ghastly imagery of Stalinist and post-Stalinist repressions, this episode draws our attention to the nature of power, which relies on acceptance by the majority to perpetrate its terrors.

The fusion of victim and perpetrator roles, incorporated into the very structure of Soviet state violence, defines the post-Soviet landscape of memory and, in particular, underlies the consistent failure of the people to “work through” collective and personal trauma. Collective memory is “torn apart” by two opposite drives: to cover up the traces and to excavate them. Prigov’s novel expresses this tension by oscillating between silence and redundancy, omission and repetition.

The narrator’s paralysis serves as a powerful embodiment of this shared condition—and inaugurates an important metaphorical shift. The very impossibility of the speaking subject’s position highlights the intransmissibility of the traumatic experience. Paradoxically, the techniques of omission and elision permit the narrator to represent “the pain of others” in a way that does not, like straightforward narration, translate into appropriation of their suffering.

Prigov’s narrator bears witness to the Soviet catastrophe after the collapse of witnessing itself, giving testimony through a mutilated body on which catastrophe is almost literally inscribed. The paralyzed narrator’s body, seemingly impossibly, becomes collective and is itself transformed into a work of art or, rather, a text.

The reader/viewer is ultimately placed into the position of “regarding the pain of others” him/herself, forced into sharing in the traumatic experience or, to use Marianne Hirsch’s term, into experiencing “post-memory.” Yet precisely because it is metaphorical, the bodily experience conveyed to the reader demands active interpretation. That is, it demands at least the partial resolution of discursive paralysis—and catalyzes a conversation that may help restore collective memory.

Today, the culture some of us have studied—or lived in—is complicit in crime. Yet instead of being afraid of talking about it and thereby making it “work,” we might want to engage in a careful yet active re-reading of metaphors we might otherwise like to discard. By daring to do so, we might also start to re-write them, the better to deploy them in a different sort of story.