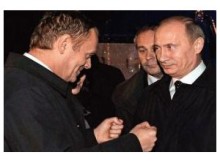 Tad Schnaufer II is a Master’s student in the Center for Global Affairs at the New York University School of Professional Studies.

Russia has invaded Ukraine and scaled back relations with the West. Both sides have slapped each other with sanctions and begun playing political games. No clear winner has emerged from the yearlong confrontation except one unlikely state: Poland. Russia’s actions in Ukraine and threats to NATO have drawn attention to Eastern Europe and Poland’s strategic position. Within the last year, Poland has gone from a rising state in the East to a top leader in NATO and the EU, thanks to Putin’s aggressive foreign policy. As Russia continues to strain relations, Poland has stepped up to offer solutions and has had an influx of investment, military aid, and visits from world leaders unseen in its past. The more the Russia taunts the West the more Poland gains political, economic, and military clout.

First, Europe now looks to Poland for leadership in the impending crisis. The new focus has led to the election of Polish Prime Minister Donald Tusk as president of the European Council and head of the EU Summit, even though he speaks neither English nor French fluently. Tusk will be the first Pole to hold a high-ranking position within the EU.[1] In addition, Polish soft power continues to get a boost as NATO announced that Poland will host the next NATO summit in 2016.[2] As Poland has gained worldwide attention, it has seen a great number of world leaders visiting in rapid succession including President Obama and German Chancellor Merkel. Politically, the limelight continues to shine on Poland as fears of Russia’s possible plans circulate.

Furthermore, Europe’s dependence on Russian national gas has raised concerns about energy dependence and security to Poland’s benefit. Poland has stepped up to offer several alternative fuels including coal to counter the dependency on Russian gas. With the current sanctions, Poland has laid out plans to construct shale gas facilities with new investments from the UK and the EU as a way to subvert dependence on Russian gas.[3] Even the U.S. Secretary for Commerce stated in September that the United States and Poland should escalate trade to enhance energy security.[4] Surely, Poland would not have received such benefits during stable European relations with Russia.

Finally, when it comes to hard power Poland has enjoyed the recent eastern shift of European defense interests. Poland has seen a quick increase in military investment and physical troops from NATO countries in response to the Russian aggression. Firstly, NATO moved aircraft to Poland in an immediate response to the Ukrainian Crisis. Then NATO assigned Poland command of the Baltic Air Policing (BAP) mission this past May while tripling the mission’s strength.[5] Poland not only has received aid, but also has in turn taken command of many operations, displaying the newfound trust and respect in which it is held. With this new trust, the United States and NATO have now expedited investment and arms sales to Poland. Both entities have sold advanced missile systems and technologies to Poland totaling over 500 million US dollars within the last 6 months.[6] Following the Wales summit, NATO declared that it will double the troops stationed at its most eastern base known as the Multinational Corps Northeast in Szczecin, Poland.[7] The summit also decided to perform large military exercises in Poland including a 12,500 strength forces from eight nations of the alliance.[8] In addition, the United States will send 700 soldiers and a 20 battle tanks to Poland as a message of support.[9] How could Poland be anything other then thankful for such attention? Now, the West treats Poland as the frontline against Russia. Considering that a large-scale war is highly unlikely, Poland simply reaps the benefits.

Russian imperialist aggression in the last year has brought a shining light over Poland. Poland has received a lot of airtime on western news channels and has been looked to as an leader on Russia relations. Poland now commands multiple NATO operations and will host the next NATO summit. All of this enhances Poland’s soft power. Poland’s hard power has seen a drastic increase within such a short amount of time. Investments and arms sales from the U.S. and Europe have set Poland to become a regional power. Poland can thank its new Russian ally for providing the circumstance to shoot it into the realm of European leadership. With Russia still aggravating the West, Poland will surely eclipse the declining western leadership of Italy and Spain, in time.