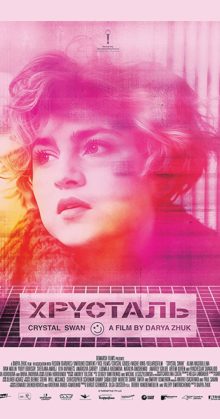 Alla Roylance is a Russian & Slavic Studies librarian at NYU.

The Department of Russian & Slavic Studies and NYU Libraries are pleased to announce a special film screening of Darya Zhuk’s Crystal Swan [Хрусталь] on Tuesday, October 9 at 7 PM. The event will be held in the Immersion Room on the 7th Floor of Bobst Library.

Darya Zhuk, a Minsk-born and Brooklyn-based filmmaker, came to the United States to study economics at Harvard. In her third year, she discovered documentary filmmaking and never looked back. For years now, she has worked at HBO and produced documentaries in her spare time. Crystal Swan is her first feature film, with screenplay by filmmaker Helga Landauer. It has taken international film festivals by storm, including the Odessa Film Festival, the Almaty Film Festival, the Pacific Meridian (Vladivostok) Film Festival, and the Karlovy Vary Film Festival.

Set in 1990s Belarus, Crystal Swan is the story of DJ Velya (Alina Nasibullina), a young woman aching to escape her drab life — devoid of hope or even color — for the siren call of Chicago. She needs a visa, but her contact at the American consulate is not convinced by her DJing credentials. In an effort to create together a resume more palatable to an immigration bureaucrat, Velya embarks on a trip deep into the Belarusian countryside. An oddball comedy of manners, Crystal Swan situates a story of youthful angst in a panorama of a nascent nation weighed down by the heavy post-Soviet baggage of economic absurdity and social frustration. For more information and reviews, visit Rotten Tomatoes.

The film has not yet been released in the United States, but Darya Zhuk has agreed to show it to the NYU scholarly community in a private screening on October 9. Following the screening, Darya Zhuk and Helga Landauer will be available for audience Q&A. Please RSVP here.