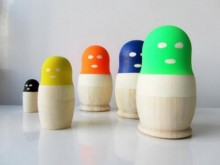 The Pussy Riot case has already run the gamut of available genres, from performance art to legal drama to kangaroo court. Now it’s taken a turn towards soap opera.

Just one day after Yekaterina Samutsevich’s release from prison, her imprisoned colleagues Maria Alyokhina and Nadezhda Tolokonnikova issued a hand-written declaration that Pyotr Verzilov, who has been traveling the world with the the group’s legal defense team to bring attention to the women’s plight, is “not a representative of Pussy Riot, nor does he have any role in the group.”  The women also say that Verzilov has “in a strange, quasi-invasive manner colonized (“okkupiroval”) Pussy Riot’s activities.”  Verzilov is accused of lying “in order to give himself the status of the main, legal representative of Pussy Riot, which he is not.”

All of this would be intriguing on its own merits, even without the added detail known by everyone following the case:  Verzilov and Tolokonnikova are married, with a young daughter. Suddenly, Pussy Riot is a completely different type of “human interest” story, and I fear that the coverage of the case will turn them from “Riot Grrrls” to “Gossip Girls.”  This would be a shame, since it obscures the far more interesting questions at stake.

Alyokhina and Tolokonnikova twice refer to the group’s cardinal principle of anonymity:  “Pussy Riot is a young woman in a balaclava.” That is, Pyotr Verzilov cannot be the face of Pussy Riot, since Pussy Riot is not supposed to have a face (and even if it did have a face, it would not have a beard).

Clearly, Pussy Riot’s anonymity was compromised when three of its members were arrested and tried (and here we recall Foucault’s argument that authorship becomes important primarily when an author can be paid, sued, or killed for his or her work).  This has been a definite conundrum for the group, now that they are among the most famous Russian faces in the world.  But even during their trial, they have attempted to deflect attention from themselves as private people, except for their repeated statements of respect for religion in general and Orthodoxy in particular.  Alyokhina and Tolokonnikova have also refrained from resorting to the most obvious basis of sympathy, their motherhood.  In their closing statements, they refer to themselves as artists and activists, but not as mothers.

The very public falling-out between Verzilov and the remaining prisoners reminds us of what was lost with Pussy Riot’s anonymity, and points to some of the possible reasons behind the participants’ choice to hide their identities.  Pussy Riot’s anonymity was not based on fear, even if fear looks justifiable with the benefit of hindsight.  Both Samutsevich and Tolokonnikova had long been members of the Voina collective, best known in the West for their award-winning drawing of a giant phallus on the Liteyny Bridge in St. Petersburg.  Samutsevich and Tolokonnikova’s faces can be seen in photos from any number of Voina actions that were at least as scandalous as anything done by Pussy Riot before the famous Punk Prayer.

The all-female Pussy Riot chose anonymity in sharp contrast to Voina’s male-centered celebrity.  For the most part, the coverage of Voina, when it was a coverage of individuals, was the story of men:  Verzilov, Lyonya Yobnuty, the people involved in the Moscow/St. Petersburg split.  Women were always a part of Voina, but only appeared as central figures when they had to be women qua women.  The ambush kissing of female police officers already walked an uncomfortable line between satire and assault; had it been performed by men, it could only have been read as sexual violence.  The biological museum event is another example: staging a heterosexual orgy without women would be rather difficult.  The other female-centered stories (engaging in a public sex act while in the last months of pregnancy; walking out of a grocery store with a frozen chicken hanging out of one’s vagina) would confront the average man with serious technical difficulties.

By contrast, Pussy Riot’s anonymity allowed their actions to be pure performance.  Even today, when I look at the video from the Christ the Savior event,  I don’t see Tolokonnikova or Alyokhina–I just see women in masks.

In their public speaking engagements, Verzilov and the defense team have (quite understandably) taken up the cause of three individual women, not an anonymous collective.  Every public statement made by the man who is not only Tolokonnikova’s erstwhile partner in art crime, but also her husband, further personalizes a drama that threatens to escape from its authors’ control.  Pictures of Verzilov’s and Tolokonnikova’s daughter (which can be found on numerous Facebook pages), not to mention her undeniably charming presence at public events, inspire a pathos that rests uneasily within the framework of anonymous punk art.

Unfortunately, whatever the motivation behind this latest turn of events, it can only advance the transformation of Pussy Riot into a reality show.  Witness the headline on today’s RBK:  “Pussy Riot participant calls her husband a crook.”  I truly hope this is only a blip in an ongoing political/artistic saga, and not a total shift of genres.  But I fear that the next questions to be asked are anything but political:  Is Tolokonnikova’s marriage to Verzilov on the rocks?  What did Verzilov do to make her so angry?  And, of course, that eternal, pathetic refrain:  what about the children?

Coming up next:  who’s playing Tolokonnikova and Alyokhina in the movie adaptation on Lifetime.