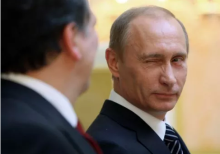 This article was originally published in Novoe vremia (The New Times).

Angela Merkel’s observation that Putin has lost contact with reality went immediately viral, gaining broad acceptance as a diagnosis.  This should come as no surprise.

The Chancellor may be right: Russian President Vladimir Putin’s behavior shows a clear break with reality.  One gets the sense that he has started to believe his own propaganda.  Whether or not Putin believes that Russians in Ukraine are being threatened, or that Euromaidan was a fight between fascists and American mercenaries, is no idle question.  We keep asking ourselves: is this bald-faced lies, a misunderstanding, or subtle strategic calculation? And what is the meaning of this relentless wave of propaganda verging on insanity?

Recently State Duma Deputy Dmitry Gukdov and United Russia Party Member Yevgeny Fyodorov discussed the Ukraine situation on Radio Liberty. Fyodorov, who seemed barely in his right mind, declared that Ukraine had been seized by American and British mercenaries and that Crimea was the last line of resistance to Western intervention.  His words were so insane as to seem less like propaganda and more like a cry for psychiatric help.

Propaganda, or the intentional formation of public opinion, is as old as society, but it only became truly professionalized during World War I.  The basic principles of propaganda emerged rather quickly:  it must be all-encompassing and continuous, and must make use of all means of communication. By the 1940s propaganda experts understood perfectly well that simply making up facts was unacceptable.  Hitler supposedly said that the greater the lie, the greater the chance that people will believe it.  But Goebbels, his propaganda minister, disagreed.  He argued against repeated lies, calling for the use of facts.

Propaganda is not the imagining of reality, but its interpretation  Goebbels warned that constant lying makes propaganda ineffective, since the inevitable exposure of the lie leads to mistrust, even if it is true.  He never tired of repeating that “everyone must know what is happening”—and was the first to tell of German military defeats, thinking that events must be interpreted before they are interpreted by the enemy.  Between 1939 and 1942 Berlin’s military communiqués were more reliable than those of the allies, and were faster by two to three days.  Factual truth guaranteed the effectiveness of Nazi propaganda.

Effective propaganda does not come up with facts; it suppresses them.  And these principles were well known not only to the Nazis, but to Soviet propagandist of the post-Stalin era.

One classic propaganda method is to spread information about enemy atrocities.  It’s worth nothing that the Nazis, who deployed this tactic widely, tried to stick to the facts.  The information about the Katyn masscare, for example, was factually correct, once it was disseminated.  But atrocity propaganda, once it becomes widespread, at some point stops being effective.  Witness how long it took information about Nazi death camps to be taken seriously in England and America.  It was all chalked up to propaganda.  To an extent, the information about Berkut’s torture of activists, or the video of sniper fire on people in Maidan can also be called propaganda, but there is no doubt as to the facts of the torture and killing

Of course one can chalk up the groundless anti-Ukrainian campaign the Russian mass media to a deplorable lack of professionalism. But I think that there is more to it. The unprecedented mendacity of this misinformation can be explained by the fact that it is produced for an audience that has been brainwashed by television, pumped up with post-Olympic chauvinism and the age-old nostalgia for “Russian Crimea.”  But these explanations cease to be effective when political mirages enter the realm of diplomatic negotiations or official declarations.

The lack of differentiation between an internal audience and external opponents suggests that this is not just ordinary propaganda, but something stranger.

Welcome to the Desert of the Weird

The sheer weirdness of what Russian authorities are saying far exceeds the usual maneuvering by top officials during negotiations.  Foreign Minister Sergei Lavrov, for example, is demanding the impossible:   the reconsideration of the stipulations of the February 21 Memorandum, which, by the way, Russian never signed.  He is demanding that presidential power be returned to the fugitive Yanukovich until the end of the year, even though Yanukovich has been excluded from the negotiation process in Ukraine (and why, if he is the legitimate president?), all while rumors were flying that Yanukovich was  dead or ill.

This demand cannot be reconciled with reality.  Yanukovich is still alive, but this point, I would not be surprised if Russia demanded he  be put back in power even if he were dead.  The Duma has been labouring over a law that would allow for the confiscation of any property belonging to any foreign owners.  This is the sort of law that should be unimaginable even in their wildest dreams.  Can anyone imagine an even slightly sane investor who would risk putting a cent into a country where the law, rather than protecting property, provides for its confiscation?

Russian diplomacy and legislation stem from non-existent facts, deny the obvious, and are the stuff of fantasy (which, of course, does not get in the way of their cynical deal-making).  The circus surrounding the Russian troops in Crimea and the Crimean authorities is particularly telling.  Putin is convinced:  all you need to do is strip the epaulettes and badges from Russian soldiers and they’ll be as invisible, like something out of Harry Potter.   The world is asked to see what does not exist (pogroms, murders—around a thousand killed) and not see what does exist, just like in a child’s game:  “Now you see me—now you don’t!”

Of course diplomacy often involves distorted facts.  But a foreign policy based entirely on fantasy is truly exceptional.  Russia is supposedly building camps for non-existent Ukrainian refugees, numbering in the hundreds of thousands. But it’s a simple matter to prove that there are no refugees:  refugee camps have to be inspected by UN or Red Cross workers.  How can there be a realistic set of policies based entirely on lies?  Even the anchors of Russia Today have gone AWOL, refusing to utter the nonsense that’s being pushed on them.

This dangerous abandonment of the reality principle on the part of the Russian establishment in general and Putin in particular has its roots in psychology.  The British psychologist Donald Winnicott once proposed a convincing picture of the transition from infancy to maturity.  Winnicott believed that the baby exists in a world entirely subject to his will, where he is the absolute ruler of all he surveys.  If he wants to eat, food magically appears.  If he’s uncomfortable, his mother changes his diapers.  Winnicott thought that normal maturation is the process of setting aside the illusions of omnipotence in favour of an appropriate relationship to reality.  And he defined reality as that which resists:  I want something, but reality refuses to grant my wishes.

Long years in power, especially unlimited power, lead to regression to the stage of illusory omnipotence.  Everything the sovereign wants happens at the wave of his magic wand.  The feeling of omnipotence grows as leader ceases to surrounded himself with people who can remind him that reality is not subject to his will.  The Winter Olympics in the South, and especially the unexpected victories in the games, create the illusion that reality does, indeed, conform to his will.

When these wishes encounter resistance from reality, the result is psychosis, the exclusion of reality from one’s field of vision.  The French philosopher and psychiatrist Jacques Lacan called this “forclusion.”  This is a negative hallucination: something is in the line of sight, but can no longer be seen.

Winnicott also believed that the child’s gradual transition from omnipotence to the reality principle presupposes a transitional period and is accompanied by the creation of “transitional objects.” Usually these are toys that, while belonging to the outside world, are subject to the child’s will and smooth over the transition from omnipotence to limits set by reality.  Winnicott wrote that the object “must seem to the infant to give warmth, or to move, or to have texture, or to do something that seems to show it has vitality or reality of its own.  […] It comes from without from our point of view, but not so from the point of view of the baby. Neither does it come from within; it is not a hallucination” (“Transitional Objects and Transitional Phenomena,” 1953).

The problem with the absolute ruler is that beyond his country’s borders extends an entire world of reality that does not answer to him.  The events in Ukraine are a real trauma for someone who has come to believe in his own omnipotence. Reality itself can be completely excluded and replaced by transitional simulacra.

Everything hostile is entirely external (and connected to America or Europe), while everything positive is connected with the internal, a Russia persecuted from without.  This world is populated by obedient transitional objects, like the Crimean parliament.  As in a game, the troops from Russia become divisions that were formed from within.  It’s a game on the verge of hallucinations, allowing for the fulfilment of desire despite all reason, despite all impossibility and absurdity.

What looks like propaganda  is the production of simulacra, of collective hallucinations to indulge the leader.   These transitional objects allow the leader to make decisions that, in the context of reality, look insane.

If these wishes on the part of an omnipotent consciousness are satisfied once again and Crimea becomes Russian by magic, just like the Winter Olympics in the subtropics, then the ruler’s consciousness will give free reign to a notion of a world that stops resisting. Then reality will finally submit to a psychotic will that ceases to believe in any boundaries at all.

–Translated from the Russian by Eliot Borenstein