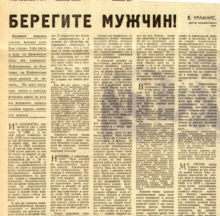 Marko Dumančić is Associate Professor of History and Director of Center for Innovative Teaching and Learning at Western Kentucky University.

Vladimir Putin has not only restructured Russian politics in his own image, but also intentionally aimed to remasculinize the post-Soviet cultural space. The effort to re-traditionalize Russian masculinity is, in part, a response to the dire demographic crisis facing the country. Russian men live, on average, thirteen years less than Russian women and their male counterparts in the West. High morality rates for males between fifteen and sixty-four are due mostly to circulatory diseases and non-natural causes – particularly accidents, poisoning, violence, and injuries that accompany high levels of alcohol consumption. Given the discrepancy between Putin’s carefully managed macho image and the reality on the ground for most Russian men, it is hard to interpret the Russian president’s image-conscious campaigns as anything but an exercise in overcompensation. Putin’s hypermasculinity as a “scenario of power” has been as meticulously staged and crafted as that of Stalin.

Perhaps even more interesting is that the concern for Russia’s men has its roots in the 1960s, when demographer Boris Urlanis penned an article titled “Save the Men! [Beregite muzhchin!]” When he first deployed the term in the summer of 1968, Urlanis intended to sound an alarm about the existential calamities facing Russian men. He pointed to a higher infant mortality rate among male children and discussed the fact that the average male lifespan was eight years shorter than that of women. To Urlanis, the causes of this disparity seemed self-evident: men suffered higher rates of alcoholism, committed suicide in larger numbers, and more frequently suffered fatal injuries at work. He recommended that the country open “male clinics [muzhskie konsul’tatsii]” to offer prophylactic services to men. Besides presenting the data, Urlanis made the case that “saving men” was in everyone’s interest, especially women’s. He warned that the predominance of male mortality means hundreds of thousands of “splintered” families and hundreds of thousands of women who lose all the benefits of a normal family life.

Although Putin’s Russia faces a similar problem, it is interesting that the response to Urlanis’s call to “save the men” faced open derision fifty years ago. While no one objected to Urlanis’ demographic data, many wondered aloud about the causes of this “masculine malaise” and the most appropriate solutions. The newspaper Literaturnaia gazeta (LG) readily gave voice to those who contended that men should be denied sympathy because they were victims of their own negligence.

Larisa Kliachko, a prominent journalist, was the first to reject Urlanis’s diagnosis, noting that she spoke not only for herself but also for the thousands of women who had written to reject Urlanis’s call to action. She averred that it would be much better for men to take some personal responsibility for their predicament than to expect a free lunch. Without mincing words, Kliachko argued that men themselves were to blame for the higher mortality rates they faced.

By any statistical indicator, men were self-destructive: they boasted sky-high rates of smoking, alcoholism, and hospitalization due to injury. She contended that while men indeed lived shorter lives, women’s quality of life was poorer because of innumerable professional, societal, and domestic obligations. They faced a higher incidence of malignant tumors and were disproportionately affected by various diseases of the circulatory system. She not so subtly implied that men were contributing to women’s ill health by being absent in pursuit of the next hedonistic high. Most of all, Kliachko objected to what she perceived as Urlanis’s blackmail approach to recruiting women to his cause: “To exert a strong influence on impressionable women, the scientist resorts to intimidation: ‘If you do not take care of the men, you will remain without suitors.’” Between the lines, she seemed to be pondering women’s true predicament: with suitors like that, who needs marriage?

Kliachko’s journalist colleague, Ada Baskina, amplified the criticisms of Urlanis’s article by pointing to an experiment involving two groups of squirrels. It turned out that the squirrels who were made to run in a hamster wheel outlived their sedentary counterparts. Baskina declared that Soviet men could learn something from the diligent rodents and should apply their energies to helping around the house: “Wouldn’t this reduce the time for drunkenness, and maybe even for smoking? And wouldn’t it be nice if they came home to a happy spouse rather than a wife who was irritated that he had, once again, showed up at the doorstep black-out drunk?” By all (published) indicators, it seems clear that LG’s female audience had turned a deaf ear to Urlanis’s call to “protect the men,” countering that men would do well to follow the example of their female compatriots. To underscore how bizarre it was to ask (of women) “to save the men,” LG editors accompanied the discussion with a cartoon depicting men as mollycoddled babies under the care of adult women.

Given that Putin-era macho politics have clamped down on public manifestations of feminist activism, it is perhaps no surprise that present-day Kliachko’s and Baskina’s cannot make their views known in mainstream media. This is not to say that the Soviet Union of the 1960s was a hotbed of progressive feminism or uncensored media. It is, however, striking how much dominant the androcentric model has become under Putin. The fact that the Russian #MeToo movement has struggled to come into its own suggests that Putin’s determination to “save Russian men” comes at the direct expense of feminism and gender equality.