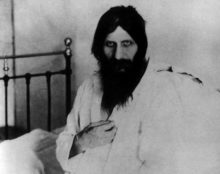 Nikta Mahmoodi is a BFA Candidate at the Maurice Kanbar Institute of Film & Television and a Member of the Squash Team at New York University.

[Note: This is Part I of a two-part essay. Part II will be posted on Thursday.]

Last spring, I, along with my acquaintance, roommate and co-director, Sonya Stepanova, completed a film entitled “Rasputin’s Penis.” This is its origin story.

When our Documentary professor presented us with the option of working together for our final project, Sonya and I thought, “Hey, we should partner up — you know, half the work!” Sounds great, right?

Here’s another illustration of how our minds work: Sonya once told me that she had been playing Bruce Springsteen’s “Atlantic City” on repeat for weeks and that this was the only song she listened to, every day. Guess who had done the exact same thing about a month earlier?

When we were coming up with an idea for our film, we both agreed it had to be historical. A brief period of brainstorming led us to Rasputin and the legend of his penis, a legend each of us had somehow learned independently. That fact alone is rather bizarre; perhaps you, dear reader, would like to call our respective parents and make sure we are okay.

If you recall, Grigori Rasputin (1869-1916) was a self-described holy man from the ranks of the peasantry who gained significant influence with Tsar Nicholas II after 1905. Rapidly earning the trust of both Nicholas himself and his wife Alexandra, he became a “healer” for their hemophiliac son, Alexei. Fearing the political effects of Rasputin’s continued presence at court and mindful of the rumors swirling around his relationship with the Tsarina, a group of noblemen assassinated him in 1916. Murdering Rasputin turned out to be pretty hard: when poisoning didn’t do the trick, the assassins (according to their own reports) had to shoot him. Legends about Rasputin’s sexual prowess and the allegedly enormous length of his penis were only amplified by the outlandish circumstances of his death.

Researching the topic proved difficult. Every article we could find on the subject seemed sarcastic and superficial. We failed to uncover any academic papers discussing Rasputin’s severed appendage. Eventually, we stumbled upon Reddit’s “r/askhistorians” page, where we discovered stories involving Rasputin’s penis and rogue sex cults in France. Sonya and I had no idea what to do with this information, nor did we think we could credibly cite it in an academic context.

All we could confirm was this: in the late 1990s, a man named Michael Augustine purchased a storage locker that turned out to be belong to Marie Rasputin — Rasputin’s daughter — who had moved to California and died there in 1977. He discovered what appeared to be a giant penis preserved in a jar among Marie’s personal effects. Testing, however, revealed it to be merely a pickled sea cucumber.

I called my old environmental science teacher from high school to ask for information on sea cucumbers. We then conducted an intense White Page search to find Michael, called him, and…nothing.

It was only after interviewing Yanni Kotsonis, Professor of History and Russian & Slavic Studies at NYU, that we were able to puzzle out some of the information we did have (excerpts from our interview with Professor Kotsonis appear in our film, which will be embedded alongside Part II of this post). Did factual accuracy even matter in this case, or would an exposition of the fiction be enough? Were we too fixated on discovering first-hand accounts of the penis while ignoring the absurdity of the myth’s very existence?

From there, things only got more philosophical as research gave way to reflection. This shift affected the tone of our investigation: as aggressive inquiry turned into gentle pondering, we lounged in our tiny dorm rooms, slumping on creaky beds. Occasionally, one of us would vocalize a thought or two, always hoping our partner would produce some kind of summative statement or have a stroke of genius.

Instead, we decided that the myth’s existence was itself an apt representation of Rasputin’s character and role as a “mystic.” His transformation into an American pop-culture icon and cartoon villain was only possible because of the uncertainty of his past, which rendered him perfectly malleable as a fictional figure. In the end, we learned, the image of Rasputin held just enough historical authenticity that it could be molded into anything the present required.