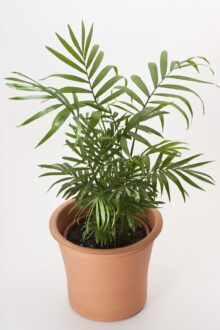 Elaine Wilson is a translator, writer, and PhD candidate in the Department of Slavic Languages at Columbia University.

Fabio lived with me for six months. I brought him home at the beginning of the pandemic thinking we’d be together for a long, long time, but by the end of the summer he was gone.

His name wasn’t always Fabio. When we met he was called “Parlor Palm,” but his long, wavy fronds inspired the name change. However, over time the name seemed less and less appropriate; the stable drama of the lush and lively leaves gave way to the dynamic drama of their deterioration. They first developed brown tips, then drooped, later yellowed, and eventually they just dried out altogether. Despite months of trial and error—lighting changes, frequent watering, and one desperate repotting—I couldn’t keep my plant alive.

I was reminded of my failure with Fabio earlier this year in an unlikely place: the pages of a Soviet short story. “Pkhents,” written by Abram Tertz, the pen name of Andrei Sinyavsky, is the story of an incognito extraterrestrial stranded in the Soviet Union. He’s not one of the stereotypical little green men, but he is, in a sense, green: out of all life forms on earth, he identifies most with the plant kingdom. He is a kind of alien cactus masquerading as a hunchbacked book-keeper.

Scholars and critics have pointed to the alien figure leading a dual life as an autobiographical gesture: Sinyavsky, an ethnic Russian, was a Soviet literary critic who assumed the explicitly Jewish pseudonym—Abram Tertz—to compose dissident works. Indeed, the bulk of Sinyavsky-Tertz’s oeuvre is populated with misfits, outcasts, and hybrid and contradictory identities through which the author exorcised his own sense of incongruity with the Soviet world.

Sinyavsky-Tertz’s ultimate outsider is arguably the narrator of “Pkhents,” Andrei Kazimirovich. This name is a fabrication of course; in order to blend in, the cosmic cactus invents a human persona. Importantly, his fictional identity contains the author’s real first name (Andrei), a confluence that, as mentioned above, reflects the fractured identity of Soviet intellectuals, but also serves as a reminder of the complex relationship between author and text.

In addition to Andrei Kazimirovich’s obvious otherness, his failed sexual encounters and frustrated desires make space for discussions of queerness: he rejects the advances of his neighbor Veronika but longs to connect with another hunchback, Leopold, whom he believes is a fellow alien.

All of these approaches are important and insightful. They are also anthropocentric. Because he identifies most closely with the vegetal world, I see Andrei Kazimirovich’s perspective as a plant-person (or is it person-plant?) as a unique opportunity to invite another critical reading of the text, one that takes up environmental concerns.

His strange dual status as insider and outsider is an exercise in straddling species and an occasion for the natural world to speak back to humanity from an almost equal place within it. I should clarify that I do not believe that ecological concerns were at the forefront of the author’s mind when he was writing “Pkhents,” but I also do not believe that makes Andrei Kazimirovich a less compelling spokesplant.

Andrei-Kazimirovich expresses his concerns on terms that echo with our contemporary ecological anxieties. The world—this world—recalls his home planet, but proves less hospitable and less sustainable: “The air [is] wrong, the light [is] wrong, and all the gravities and pressures [are] strange,” (498).

Most pressing of all is the scarcity of water. Andrei Kazimirovich lives in a communal apartment where water usage is carefully monitored and, ultimately, a contentious issue. Proper hydration—or eating, in his case—is a rare occurrence, a brief experience of freedom: “What pleasure it gave me to throw off my clothes, remove my wig, tear off my genuine India-rubber ears, and unbuckle the straps which constrict my back and chest. My body opened out like a potted palm brought home from the shop in wrapping paper,” (501).

Walking through puddles in the rain is both a “luxury” for Andrei Kazimirovich and a desperate act of a starving being. He has even inscribed his tortured relationship with water (and perhaps his fate?) into his human identity by giving himself the last name Sushinsky.  A derivative of the verb sushit’, meaning ‘to dry’ or ‘dehydrate,’ this lifeform from another world has become “the dehydrated” on Earth.

Years of subjecting himself to human life have left Andrei Kazimirovich’s body mutilated and broken. He secretes “unhealthy slime,” his many eyes are “getting appreciably dimmer” and one eye is already completely blind, all from being smothered under the weight of human material (501).

His living conditions eventually become so unsustainable that he plans his own death, and his final act is a powerful gesture of protest against human transformation. He plans to return to the forest of Siberia to the site of the crash-landing that first brought him to earth:

I’ll search for it till I find it. The hole we made when we fell. Put wood all round it. Juniper blazes up like gunpowder. I’ll sit down in the hole, untie myself and wait. […] When the first frosts begin and I see that the time is ripe—just one match will be enough. (506)

To get to his funeral pyre, Andrei Kazimirovich says he’ll travel hundreds of kilometers by boat. Surrounded by water, he says “I’ll drench myself three times a day if I want to.” (506). From water on all sides to a final fiery conflagration, Andrei Kazimirovich’s path to death is eerily reminiscent of rising ocean levels and global temperatures.

One of the most striking aspects of his plan for self-destruction is his desire to die gazing up at the stars. It’s a symbolic search for a now unrecognizable planet, a homeland lost. In my green reading, I also see a reflection of human escapism; like the Space Race of the twentieth century and the Space Force of today, projects that look upward and fix our ambitions above and beyond our planet are a means of redirecting our gaze away from a ravaged earth.

I couldn’t save Fabio, and I don’t know that I’ll ever have a green thumb. But I do see a teaching moment in my failure: healthy environments—even for houseplants—are a vital network of factors, and my own efforts play a crucial role in maintaining the balance. As human incursion into delicate ecosystems continues to teach us hard lessons about environmental crises as existential crises, I can’t help but think that a green reading of “Pkhents” could be a timely and useful complement to our understanding of the story.