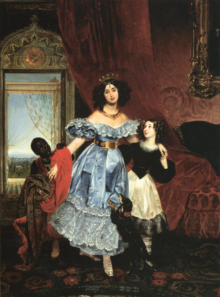 Above: Karl Briullov, “Portrait of Countess Julia Samoilova and her adopted daughter Giovanina and a Black Page” (1832-34).

Maria Taroutina is Associate Professor of Art History at Yale-National University of Singapore. She specializes in the art of Imperial and early Soviet Russia and is the author of The Icon and the Square: Russian Modernism and the Russo-Byzantine Revival, which was awarded the 2019 USC Book Prize in Literary and Cultural Studies by ASEEES. Taroutina has also co-edited two volumes, Byzantium/Modernism: The Byzantine as Method in Modernity and New Narratives of Russian and East European Art: Between Traditions and Revolutions.

The past three decades have witnessed the steady rise of scholarly interest in depictions of ethnically and racially diverse subjects in European art. Lavishly illustrated, multi-volume publications, such as the Image of the Black in Western Art, L’Art et La Race, and The Orient in Western Art, have yielded invaluable insights into the politics and poetics of Western visualizations of race from antiquity to the present day. Typically, Russia is left out of these accounts. In the last few years, a number of important studies, such as The Ethnic Avant-Garde: Minority Cultures and World Revolution and Central Asia in Art: From Soviet Orientalism to the New Republics have addressed questions of race and ethnicity in twentieth-century and Soviet art, but only a handful of publications have analyzed Russian representations of race in earlier time periods.

This is somewhat surprising given that, by the opening decade of the twentieth century, the Russian Empire stretched from Finland to the Sakhalin Islands and the Tsar ruled over millions of ethnically non-Slavic subjects. Indeed, beginning with the mid-seventeenth century, Russia’s increased contacts with the inhabitants of the Crimea, the Caucasus, Central Asia, and the Far East made a significant and lasting impact on the creative pursuits of several generations of Russian artists. Much like their European contemporaries, Russian cultural practitioners were seduced by the rugged appeal of Caucasian landscapes, colorful Central Asian bazars, and the unusual habits, customs, and appearances of newly assimilated peoples. Furthermore, the rapid influx of expensive materials, luxury items, and exotic objets d’art from across the Russian Empire into Moscow and St. Petersburg meant that artists were constantly exposed to a rich variety of different pictorial and decorative traditions, which stimulated the imagination and furnished them with new aesthetic possibilities.

From the late seventeenth century onwards, in addition to inanimate goods, it also became increasingly fashionable among the Russian aristocracy to import people of color as household servants in line with prevailing European trends. During Peter I’s reign, the Russian Imperial Court instituted a special service position called the “Blacks of the Imperial Court” [Arapy Vysochaishchego Dvora]—a practice that continued well into the twentieth century until the abrupt end of the tsarist regime in 1917.

Many of these servants appear in various paintings throughout the long nineteenth century such as in Orest Kiprensky’s “Countesses Maria Pototskaia and Sofiia Shuvalova” (1834-1836) and Karl Briullov’s famous “Portrait of Countess Julia Samoilova and her adopted daughter Giovanina and a Black Page” (1832-34). Some went on to marry Russian women, father mixed-race children, and live independently of the court.

Apart from domestic servants, numerous noble families also took up the practice of adopting Kalmyk children as their wards, such as the young girl depicted in Ivan Argunov’s “Portrait of the Kalmyk Girl Annushka” (1767), who was the protégé of Countess Varvara Sheremeteva.

Lastly, guests, visitors, and diplomatic emissaries to the Russian court from across the empire and neighboring territories were also frequently immortalized in paint by leading Russian artists, such as in Vladimir Borovikovsky’s full length “Portrait of Murtaza Kuli” (1796) (below) and Nikolai Sverchkov’s “Portrait of Shamil” (1859).

By the mid-nineteenth century, dramatic advances in transportation technology opened up new travel opportunities to remote territories at a reduced cost and countless Russian artists—including canonical names such as Ivan Aivazovskii, Vasilii Polenov, Ilia Repin, Vasilii Vereshchagin, Arkhip Kuindzhi, Valentin Serov, Konstantin Korovin, Léon Bakst, and Nikolai Roerich, among others—began to traverse both the Russian Empire and beyond, recording the different peoples and novel locales that they encountered. Moreover, the Imperial Academy of Arts sponsored many of its most accomplished young talents to live and work abroad, actively encouraging them to expand their visual repertoires. Thus, for example, during their Academy-sponsored sojourn in Paris in the 1870s, Repin and Polenov used the opportunity to hire and portray an array of racially diverse models, producing a series of compelling portraits such as “Odalisque” (1875), “Egyptian Girl” (1876), “Woman with a Dagger” (1875-76), “A Jew at Prayer” (1875) and “Portrait of a Negro Woman” (1875-76) (below).

Polenov went on to tour North Africa and the Middle East in the 1880s, producing hundreds of watercolor studies and oil sketches of his travels, many of which were incorporated into large-scale oil paintings on Biblical themes, such as “Christ and the Adulteress” (1886) and Christ among the Doctors (1896), which today are celebrated as some of his most significant works. Likewise, Vasilii Vereshchagin, arguably the most adventurous Russian traveler and prolific painter of ethnographic subjects, produced a unique corpus of images that powerfully encode both the horrors and triumphs of the Russian and British colonial projects and the artist’s conflicted attitude towards them. Vereshchagin’s work in particular raises a series of complicated questions about the parallels and divergences between distant and intra-imperial racialized identities and how these were interpreted—or misinterpreted—by Russian audiences.

In fact, it is important to note here that in a number of cases, the artists themselves originated from the imperial periphery and had mixed ethnic backgrounds and layered identities. For example, Vereshchagin habitually played up his Tatar ancestry, Aivazovskii was overtly proud of his Armenian heritage, and Kuindzhi often referred to his underprivileged upbringing as the son of a poor Pontic Greek shoemaker. Consequently, the relationship of these artists to their marginalized and ethnic minority subjects was necessarily unstable and not simply a straightforward case of a self/other binary.

Indeed, portrayals of racial “others” constituted a dynamic and enduring leitmotif in the Russian visual and decorative arts throughout the eighteenth and nineteenth centuries. Regardless of their stylistic and aesthetic persuasions and professional affiliations—Academicians, Peredvizhniki, Mir Iskusstniki or Symbolists—artists from all walks of life tried their hands at picturing subaltern subjectivities and new, culturally unfamiliar content. However, both these representations and discussions of them have remained conspicuously absent from mainstream accounts of Russian art history—a lacuna that is particularly glaring in light of the rich corpus of work from related Slavic fields, such as history, political science, and literary studies. A number of excellent publications such as Harsha Ram’s The Imperial Sublime: A Russian Poetics of Empire, Susan Layton’s Russian Literature and Empire: Conquest of the Caucasus from Pushkin to Tolstoy, David Schimmelpenninck van der Oye’s Russian Orientalism: Asia in the Russian Mind from Peter the Great to the Emigration, and the recent anthology Under the Sky of My Africa: Alexander Pushkin and Blackness, have all rigorously interrogated the fraught questions of race-consciousness, stereotyping, and marginalization, the rise of Russian nationalism, and the proliferation of imperial aesthetics in the writings of major historical and literary figures such as Catherine the Great, Alexander Pushkin, Mikhail Lermontov, Alexander Borodin, and Leo Tolstoy, among others.

The exclusion of the visual and decorative arts from these searching and imperative discussions is a striking and regrettable omission, especially with ongoing debates in mind about race, bias, and discrimination in contemporary Russian politics and discourse. Comprehension of the ways in which images of racial and ethnic minorities were received and understood by period viewers in Russia can shed important insights into the evolving Russian ideas on race, nationality, and empire. It would likewise be instructive to examine to what extent artists had participated in the discursive matrices that advanced Russia’s expansionist machinery on the one hand and critiqued and challenged it on the other. Finally, interrogating the ways in which artists from the so-called imperial outposts contested and revised their positionality as Russia’s racialized “others” can add texture to our understandings of Russia’s own fraught relationship with the West: its profound cultural indebtedness, feelings of inferiority, and the constant need to prove its own “civilized” white identity. In light of recent world events, there is an added urgency for a new generation of art historians to address these pressing questions and to bring fresh eyes, novel methodologies, and interdisciplinary perspectives to analyze and reinterpret this long-neglected but fascinating visual material.