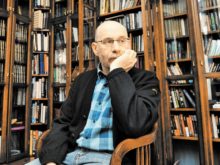 Why reread Boris Akunin? For that matter, why read him in the first place? And, for God’s sake, why blog about it?

My answers to all those questions are, as usual, idiosyncratic, but with the hopes that my own personal quirks can be harnessed for scholarship, entertainment, or both.  I find myself returning to Boris Akunin precisely because of how little inclination I’ve had to write about him in the past.  I began reading his Erast Fandorin novels very soon after they came out, thinking that they might find a place in the book that was to become Overkill.  But it turned out that the very things that made his novels so beloved rendered them useless to me at the time: they weren’t particularly violent, contained virtually no sex, and their connection to the postsocialist 1990s was oblique. Not to mention their salient selling point:  they were written in good taste.  What on earth did I need that for?

But I kept reading him.  I liked the Fandorin novels, though I didn’t love them.  I found myself in the minority position of preferring the present-day series about Erast Petrovich’s hapless grandson, Nika. The genre novels were great fun (and one of them will probably make it into Russia’s Alien Nations), but Sister Pelagia left me cold.   I stopped keeping up with Erast Petrovich after The Diamond Chariot in 2003, the 9th or 10th Fandorin novel depending on how you count.  It wasn’t that I disliked the book—quite the contrary— but I was simply done.

I had had my reasons for following Akunin—I thought maybe I’d do a book about post-Soviet family sagas, and I was fascinated by both his predilection for orphans and his refreshingly nuanced approach to family ties and heredity. But I set that project aside, and found that the biggest thing I had to say about Akunin was that I had nothing to say about him.

This bothered me.  Akunin was obviously important, as well as a decent writer.  And half the dissertation committees I’d served on as an outside reader seemed to involve his work. Meanwhile, whenever I contemplated teaching post-Soviet literature, Akunin inevitably made the list due to the simple fact that he is one of the most frequently translated contemporary Russophone writers.

Akunin feels to me like unfinished business. Thematically, he rarely overlaps with the questions that concern me most.  In terms of genre, I only developed a limited appreciation for mysteries  during my research for my second book, while historical fiction is a category I actively loathe. If you’re going to set your story in what is essentially a fantasy world, I’d much prefer reading something taking place in another planet or dimension, where the sheer inventiveness of the world building is prized.  A few years ago someone recommended a historical novel to me with the words, “I learned so much from it!” and I realized that this was exactly what I didn’t want.  I don’t look to fiction to give me facts, and I don’t want to evaluate it for its historical accuracy. I love stories, but I don’t trust them.

Even so, returning to Akunin makes sense: there is something intriguing about his various literary “projects.”  Why not just write a book about him? Well, maybe.  But I have no idea what that book would be, or if I’m the one who should write it. Either way, I’d need to do a lot of re-reading.

And that brings be back to the blog idea, which needs to be contextualized once again in terms of idiosyncrasy.  I’m an obsessive reader, and I prefer reading little bits of multiple texts each day rather than concentrating on any one of them, with the result that I have a ridiculously complicated, anal-retentive system for reading through the literally hundreds of texts in my queue, some on a daily basis, others on a less frequent rotation.

This system, which I have been honing for nearly two decades, facilitates an even more obsessive strategy: the deep dive into the works of a single, beloved author.  These are usually writers of fantasy & science fiction (F&SF) :  Iain Banks, Lois McMaster Bujold, Octavia Butler, C.J. Cherryh, Samuel R. Delany, Thomas M. Disch, Neil Gaiman, and so on.  Instead of reading them sequentially, I read them synoptically.  If a given author has, say, four series of interconnected texts, I’ll start with one, and then, once I’m into it, I’ll add another, until eventually I’m in the middle of four different books by a single author. It’s like juggling, only even nerdier.

That’s the approach I’m taking with Akunin.  I’ll start with Erast Petrovich, then add Nika, Pelagia, and Lastik, and see what comes next. In my F&SF deep dives, I’ve come to enjoy looking at “reread” blogs, where someone takes a particular novel and posts comments on each chapter (tor.com has a lot of them).  There are probably very few people reading on the same schedule, but it doesn’t matter: whenever someone decides to read, say, Delany’s four-volume Return to Nevèrÿon, the blog re-read is available as a companion.  I doubt Akunin is going anywhere, and in a couple of years, when someone is reading The Winter Queen and wanting to know more, this blog will (hopefully) by available.

So I’ll probably post separate entries for each chapter, referring primarily to English translations when they’re available.  The Winter Queen (Азазель) starts in a few days, and I imagine I’ll start on either Pelagia or Nika not long after that. And I hope to hear what the rest of you think about Akunin over the course of this blog.

As always, feel free to read or not read, or maybe read three years from now.  At this rate, if I stick with it, I’ll probably be doing it for the rest of my life.