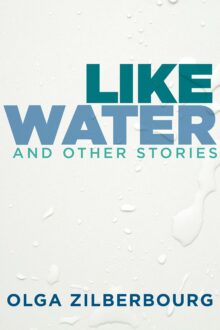 In “Rubicon,” which opens Olga Zilberbourg’s Like Water and Other Stories, the narrator, on her way to pick up her son from preschool, says, “spring came on hard and much too early this year, which must be why the dimensions of reality shifted.” If the story’s realistic beginning gives the impression that this shift is figurative, it soon becomes apparent that reality really does alter: on a street in San Francisco, a young man she knew back in 1990s Russia, who is “still seventeen on this day in 2018,” drives up to hand her a “TDK compact cassette, the exact kind he and I used to exchange in high school.” At the core of this story is a “shift in spacetime:” the “scientific theory that the past, future, and present exist simultaneously.” In her present American life, the narrator finds herself in possession of a tape with an ambiguous message that could not have possibly, but in fact does, come from her Russian past, leading her to conclude that “[s]omewhere out there, I was still seventeen.” This wildly imaginative play with everyday reality marks other stories in Like Water: in “Dandelion,” for instance, the protagonist sends her son to a literary agent in place of a novel; in “Companionship,” a three-year-old returns to his mother’s womb.

Like Water is Zilberbourg’s English-language debut, following three short story collections published in Russia. Born in what was then Leningrad (now St. Petersburg) and moving to the U.S. in the 1990s, Zilberbourg is a new addition to the by-now established, if fluidly defined, group of Russian-American writers that includes Gary Shteyngart, Lara Vapnyar, Anya Ulinich, and Irina Reyn. This group can be broadly characterized as consisting of Soviet or post-Soviet Jewish immigrants to the U.S. who write in English and mostly, though not exclusively, tackle Russian-related themes, most notably the negotiation of hybrid immigrant identities.

Many of Zilberbourg’s protagonists are Russian immigrants attempting to reconcile, with varying degrees of success, their Russian and American sides. In “The Swallow,” the image of “an old-fashioned Napoleon tart […] and a dish of raw California almonds and another dish of sugary Armenian dates” commingling on the table during the U.S.-based narrator’s visit to her Russian parents and their Armenian friend is a subtly poignant illustration of the hybrid mixtures out of which the characters’ lives are made. Reflecting the new global order in which post-Soviet Russia is only a plane ticket (and some bureaucratic paperwork) away, characters move back and forth between their old and new places of residence, and between their different identities, in stories set in both Russia and the U.S.

Alongside tales showcasing protagonists’ lives in America, several of the stories depict life in the former Soviet Union. Zilberbourg deftly captures the chaos and often downright absurdity that accompanied Russia’s transition to a more Western economy and way of life. In “Bananas for Sale,” a tractor engineer becomes an unexpectedly successful salesperson when her factory, in danger of insolvency, turns to trafficking in the exotic fruit. At the same time, while Russia and Russian immigrants remain the focus of the collection, Like Water covers broad territory, from growing pains to life in academia. This wide range of narrative directions is characteristic of a Russian-American fiction that, while firmly rooted in immigrant sensibilities, has by now begun exploring other themes.

However, by opening with a story of the past literally materializing in the present, Like Water announces that many of the reader’s standard expectations will be upended. One of these has to do with the book’s format, which features stories of standard length alongside numerous  flash-fiction pieces that extend no longer than a page, a paragraph, or, in the shortest instance, a single sentence: “The test of motherhood consisted of five oral and five written parts.” The shorter pieces have a double layer: the story on the page and the untold one hovering beneath. It is this underlying layer that, through insightfully stripped-down details, Zilberbourg invites readers to imagine and ponder. The longer story about the wrenching self-doubts and failures of parenting hovers at the edges, but is distilled into just one line that delivers an unexpected blow immediately after the title: “B-.”

In addition to its experiments with style, this collection offers new possibilities for telling immigrant stories, particularly those of women. With some exceptions, such as Vapnyar’s Memoirs of a Muse and Ulinich’s Petropolis, and despite the preponderance of female writers and protagonists, Russian-American fiction does not focus on gender, and occasionally exhibits elements of “traditional” thinking on the subject. In contrast, Zilberbourg offers a feminist exploration of the straightjacket of gender clichés in pieces like “My Sister’s Game,” which details the enraged attempts by the narrator’s older sister to head off male romantic interest during a tennis match. As the narrator puts it, “It took me many years and a lot of learning […] to understand that moment as my first realization of Zoika’s refusal to conform to the norms of her gender.” This statement illustrates the narrator’s own understanding of the perniciousness of these norms, even as the story leaves open the question of whether her sister is able to thwart them.

Motherhood, too, is imagined differently in Like Water. That this topic is a major theme is signaled early on, in the “Artist Statement” that precedes the collection: “becoming a parent turns one’s lived experience into a battleground for potential identities.” Motherhood can be a minefield for women writers given patriarchy’s conflation of women with mothers; historically, Russian culture has considered motherhood a woman’s highest calling and a near-sacred duty. Yet as “potential identities” suggests, Zilberbourg manages the rare feat of writing about motherhood in a way that centers it without conflating women with this role. Female protagonists in Like Water may have children, but they also have careers, dreams, and their own lives. Crucially, they can opt not to be mothers in the first place. As the eponymous doctor in “Doctor Sveta” says, “I’m alone and childless. I should be afraid, but, you know, I’m not.” For the childfree narrator pressured to have children by her own mother, Sveta’s account of a remarkable life, including the rare Soviet experience of working in Cuba, becomes an affirmation of her own choices. As she says in one of the most affecting lines in the collection, “This story, too, is my home.”

Another standout aspect of Like Water is the space it accords to queer storylines. Queerness can be anathema to mainstream Russian culture. Even among Russian-American writers, who tend to be much more liberal, depictions of queer characters remain rare. In contrast, Zilberbourg has several stories with lesbian characters, including the title story, “Like Water,” in which the Russian immigrant narrator attempts to parse the offer of a relationship by her close female friend in Russia. Keenly aware of how growing up in Russia with prohibitions against “girl-on-girl love” has shaped the choices she made, or rather did not make, the narrator wonders, “What would my life have been like if I’d heard of a woman openly living with another woman?” The story’s unfinalized ending expresses both her longing and the possibility of change in her life, against a background that shows women being prevented from loving one another but doing so regardless.

In both content and form, Zilberbourg’s Like Water expands the boundaries of Russian-American fiction, showing new ways of writing immigrant lives. The collection’s style is itself beautiful and replete with striking imagery (an immigrant girl’s elementary school in her native country is described as “a sea and light-years east of here”) as well as poignantly observed moments of human fragility (the punctuation-less lament “I’m sorry my baby you who are sick and I’m hollow.”)

Like Water is a book that takes risks and creates surprises. Its spirit remains with readers, offering up the joy and pain of storytelling, long after they turn the final page.