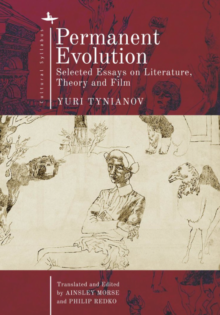 Graham Weaver is a first-year MA student at NYU. His current research focuses on continuities between the early Soviet period and nineteenth-century thought.

Despite his sizable contributions to Russian Formalism, Yuri Tynianov remains a largely understudied figure in the West. Whether a victim of canonization or cross-cultural barriers, his work continues to evade anthologies and course syllabi outside of Slavic Studies departments, much to the detriment of literary studies. Ainsley Morse and Philip Redko’s translated volume Permanent Evolution: Selected Essays on Literature, Theory and Film (Academic Studies Press, 2019) seeks to buck this trend. Covering over a decade of writing, the volume offers a sweeping overview of Tynianov as both a member of the Formalist School and an object of study in himself. For the first time, Anglophone readers may now appreciate his body of work for its historical significance, contemporary applicability, and lasting influence on Western theory and criticism.

True to its title, Permanent Evolution bears witness to the dynamic trajectory of Tynianov’s career. Serving as the “first comprehensive collection of [his] theoretical work in English,” the book offers sixteen essays and articles centered on literature, film and literary development, a welcome addition to the Anglosphere given the relative scarcity of his translated works in the past (The Death of Vazir-Mukhtar, Lieutenant Kizhe, as well as a few isolated essays). As opposed to organizing the volume thematically, Morse and Redko placed the essays in chronological order. This approach foregrounds the progression of Tynianov’s thought “as it crisscrosses thematic, generic, and disciplinary boundaries,” enabling the reader to follow his ideas as they evolve organically and adapt to his ever-changing interests and academic pursuits.

Readers familiar with Tynianov will hardly be surprised to find much of the collection devoted to questions surrounding literary history and development. Wary of all things static, Tynianov views literature as both dynamic and historically-contingent, a system “driven by struggle and shift” rather than gradual change. This turbulent process takes a number of forms throughout the essays. From parody to style, verbal orientation to historical trends, Tynianov seizes upon a wide array of topics to demonstrate the profound volatility that underlies literary development.

As one might expect, Tynianov places this instability at the center of his methodology. Rather than working in a vacuum, he grounds his approach in historicism and often incorporates relevant authors, texts, and trends into his analysis. In “The Ode as an Oratorical Genre,” for example, he considers authorial orientation in Lomonosov, Tyutchev, and Derzhavin in order to reveal the constant “migration of functions” that structure our understanding of genre. By that same token, his article on “Dostoevsky and Gogol” examines parody and its ability to reimagine clichéd devices and thereby catalyze innovation. Here and elsewhere, he treats literary analysis as a process in lockstep with historical change. Just as literature morphs over time, so too must the critic utilize their unique retrospective position to draw out any overlooked qualities in a given work.

In addition to literary criticism, Permanent Evolution also offers a robust selection of Tynianov’s writings on film, which mainly revolve around the question of form. Whether exploring the possibilities of visual abstraction in “Film–Word–Music” or cinematic representations of time in “The Foundations of Film,” Tynianov takes a keen interest in the ways in which lighting, shot composition, and montage engender a “semantic reconfiguring of the world.” On the whole, these essays provide an important new dimension to Tynianov’s thought: whereas his literary work draws upon centuries of material, here the reader bears witness to his reactions to cinema in its infancy. Accordingly, the reader gains a better appreciation for his deep sensitivity to his own historical moment.

A major strength of Permanent Evolution lies in Morse and Redko’s efforts to underscore the recurring themes that characterize Tynianov’s thought. In an attempt to smooth over his “occasionally slapdash terminology,” the duo consolidates his ideas into a consistent vocabulary that runs throughout the collection. While some might expect that this approach would flatten Tynianov’s voice, Morse and Redko evade this pitfall by including detailed footnotes that flag notable inconsistencies and justify any unusual decisions related to translation. In effect, they succeed in preserving the “complex interconnectedness” of his work without losing the texture of the original Russian.

Aside from footnotes, Morse and Redko also supplement the essays with two appendices and a biographical note. In the first appendix, they provide a comprehensive list of the many cultural figures scattered throughout the text, complete with biographical information and notable achievements. In the second, they compile a glossary of relevant terms including literary movements, esoteric references, and theoretical concepts. This last category proves invaluable, as it affords Morse and Redko the space to break down Tynianov’s thornier terms (smena, byt’, and sootnosit’sia, to name a few). While the biographical note is shorter than this reviewer might have hoped, this additional material serves as an indispensable backdrop to any reader unfamiliar with Tynianov’s life and early Soviet history.

A note of praise must also be reserved for Daria Khitrova’s lucid introduction to the collection. In the space of twenty-four pages, she manages to ground Tynianov in his historical moment as a Formalist while highlighting the traits that distinguish him from his colleagues. She pulls off this balancing act by stressing both the historical and contemporary significance of Tynianov’s work. Whether breaking down his concepts or placing him in relation to his peers, she demonstrates the enduring applicability of his theories and presents him as a pioneer in the field of studies literary. As she makes clear, Permanent Evolution not only holds weight for Slavists, but also marks an “important step in advancing modern literary theory […] and recovering its history.”

“You can’t judge a bullet by its color, taste, or smell,” Tynianov once wrote, “a bullet must be judged by its dynamics.” Thanks to Morse and Redko’s diligent efforts in Permanent Evolution, the same may finally be said about his work as a whole. Long overdue, the collection offers a much-needed reappraisal of Tynianov’s legacy. Between its extensive scope and encyclopedic thoroughness, it provides an encompassing portrait of the thinker that captures his intellectual growth, dynamic thought, and historical sensitivity. For casual readers and scholars alike, Permanent Evolution is an essential study that will shape our understanding of Tynianov and Russian Formalism for years to come.