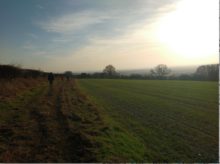 Betty Banks is a doctoral student in History at New York University.

I’m a Slavist and an immigrant. Except, I’m a Slavist who studies Southern Africa and as a graduate student in the US my visa is marked “non-immigrant,” so I suppose I am not technically an immigrant either. Yet I am enough of both to not be the reverse:  I am not not a Slavist, not not an immigrant.

My sense of being in between is heightened as I write this from Moscow, where I have been столько раз, so many times, I don’t even know anymore. Russia is another place I have not immigrated to, I suppose.

When people ask me why I moved from the UK to New York, I always I say I went for adventure. This is true, even as this desire fit neatly with better financial provision. Funding options in the UK were, are so much sparser. My last interview for a scholarship in London was right after I had flown overnight from visiting grad schools in the US. I got off my red-eye, took the tube home for a shower and coffee, and went right back to the station. I remember getting the rejection email, and on reading “a high number of exceptionally qualified candidates,” all I felt was excitement: “I get to move to New York!”

Looking back, I see that I had no real idea about the emotional journey I was signing up for in my almost-migration, but perhaps this was unconsciously a deliberate move, as if I had, I may not have ever done it.

I effectively moved twice the summer I moved to the US, once from my London home to my parents house, and once from my parents house to a bare apartment in Stuyvesant Town where I would live with a stranger from a message board that, as it turned out, I would get along with for about four days of the whole year we lived together.

The first move was more stressful, in a way, as I had to destroy the semblance of an adult life I had assembled for myself after much flailing in my early twenties. I quit my job at a human rights non-profit a week earlier than I had first planned because of the Olympics. Ostensibly this was so I didn’t have to take the train through Earls Court and Wimbledon everyday but really it meant I could watch all the weird sports I liked on staycation at my parents’ house. I had a going-away party the night before that oh-so-memorable opening ceremony featuring a sky-diving queen and an ode to socialized healthcare in mass dance. My party had neither of those things; it was American-themed. I bought loads of discounted flag memorabilia online right after the Fourth of July, and cooked way too many hotdogs. I made so much coleslaw that I got blisters from grating cabbage and tried unsuccessfully to make all my Brit friends put their fruit salad on the plate at the same time as the savory course. I even wore a stars and stripes dress.

That Saturday my dad and I loaded my life into the car before going to Fulham to watch the cycling road race. The cyclists sped past and out of London in about fifteen seconds before we retreated to a friend’s house to watch the race unfold on TV. When the time came we all ran outside again to watch the eventual Kazakh winner speed by way ahead of Team GB. Zhalko. That night Dad and I drove up to Yorkshire where I spent the rest of July watching rowing and learning the rules to competitive archery, while mourning the loss of my life as I knew it.

August rolled around pretty calmly, so I was surprised when, in the week of my flight, I was suddenly seized with an anxiety that narrowed everything. I couldn’t express then and still couldn’t name exactly what I was worried about, but it was worse than anything I had felt before any of my previous study- and work-abroad departures. I channeled my worries by packing and re-packing, an activity I find alternately nerve-wracking and soothing at the best of times. I weighed all my books on the kitchen scales, writing their weight in grams on post-it notes I stuck on all of them to help me play Tetris with the baggage allowance. I followed the ridiculous advice of a friend of a friend who had made a similar move a year prior and packed both a duvet and pack of chocolate digestives. She had told me you couldn’t buy comforters or cookies in America and I believed her. I look back on this as a sign of quite how nervous I must have been.

The night before I flew I stayed with my grandmother who said goodbye to me as if she would never see me again. When I’d told her the news few months earlier it became clear that she still bore a grudge from the war, and would never visit. She was healthier then, and unexpectedly more open-minded now, but she’s definitely not mobile enough for New York anymore.

In Heathrow, it turned out that despite my careful packing I had managed to leave one suitcase overweight. I ended up carrying a sneaker – just one – in my purse. I was upgraded on that flight; the first and so far only time this has happened to me. I spent my last morning as a UK resident helping myself to the British Airways breakfast buffet in the terminal five lounge while reading in the free papers how Prince Harry had embarrassed himself playing strip billiards in Vegas. I took my sneaker in a purse – my trainer in a handbag – to my fully flat bed in row twelve, and left.

No one told me that my relationship to place and absence would change so much in my emigration. It’s the most unexpected part of this life.  A few times a year, I am given a chance to observe a new constellation of longings, frustrations, sadness and desire shaped by distance and closeness – not a cycle, but a new bloom of emotion I have never experienced before.

On the flight back after my first Christmas home I cried after reading a piece in the Aer Lingus inflight magazine about another immigrant woman’s first trip home. The air steward brought me tissues and sat with me during take off trying to reassure me that whatever it was probably wouldn’t be as bad as I think.

I spent the first year in New York pining for London, but in year two London felt so small and provincial. Stifling. From a distance I’d seen all these things I disliked about Britain and hated spending vacations in a place that encouraged me to be that way too. Suddenly at Christmas of year four I saw myself and my homeland with fresh eyes and a new compassion, and it became possible to imagine living there again. I spend less and less time in London as my friends get priced out, and now Delta has expanded their direct flights to Manchester and Edinburgh I have given up on Heathrow, for now, all while London has grown on me again.

In New York last fall I felt more settled that I have in a long time. But now I mostly feel distance and unknowing. Waves of recognition and reminiscence for all the places I have lived wash over me without warning, taking me out of my life for a moment as if glimpses of a dream I am not sure I lived. I feel detached from all my places, and I’m not sure I know where home is. It’s probably fair to give current politics some credit for this. In Moscow last week someone suggested I was turning into a third culture kid – maybe so, but I couldn’t say where my first or second cultures are either. I turn and stare whenever I hear someone overseas with a northern accent even though I lost mine long ago on my first migration from Yorkshire to London, a move that might as well be global by British standards.

People ask me all the time where I will, or want to live when I finish my PhD, as if I am supposed to be able to answer that question. I just know I will feel very differently then. For now, I will keep on explaining that I’m British, no not from London but yes I lived there a good while. In Acton, which isn’t well known or trendy, no you probably haven’t been there. I am from near York, about half way towards Scotland, on the right hand side of the map. James Herriot. Charlotte Bronte. But I live in New York, yes the American one, and no actually, it wasn’t named after the old York but some royal Duke once upon a time. Oh you aren’t really interested in that, but yes, I have to explain this a lot.