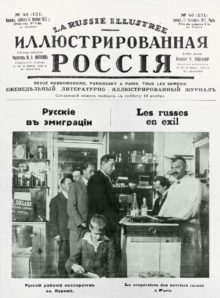 My parents were both immigrants from pre-revolutionary Russia.  My mother was from Samara and my father from Poltava.   My mother’s family were from the Merchant class (Merchants of the First Guild),  one of the wealthiest families in Samara;  their home today is the Ministry of Culture for the Samara Oblast (dom Ivantzova).   They were forced out of Russia by the Reds, and emigrated to Shanghai.  From there,  my mother’s father (Boris Ivantzoff),  sailed to California, leaving her and her governess in China.  He got a job as a cleaner at Stanford University,  but was helped by none other than Robert Oppenheimer, who gave him $5,000 to start a grocery store on Nob Hill.   About 3 years later (1925),  he was forced to relocate my mother (and governess) to Paris, due to unrest in China.  After moving them, he returned to the US, but this time to New York,  where he opened another grocery store.  When he got his citizenship, my mother automatically became a US citizen.  She sailed to New York and attended George Washington High School

My father’s journey began in Poltava.  His father, Igor Kalbouss, was of Estonian origin (Estonian spelling: Kalbus), and was an architect.  One of his chapels is standing in Poltava.  He married into a minor noble family,  Yuriev-Pekovetz. They were bi-lingual,  proficient in both Russian and Ukrainian.   Igor served in WWI in the Russian Army and later in the White Army, departing the USSR from Crimea in Wrangel’s 1920 boat lift.    My father and his mother joined him in Bulgaria, where Igor worked on the construction of the University of Sofia.  In Sofia,  my father had a small band which frequently played at the US embassy.   in 1932,  the US Ambassador liked my father so much that he pulled some strings and enabled him,  with his father and mother to immigrate to New York.

Both my parents were young participants in the “first wave” of immigrants from Russia after the revolution.  This was my heritage:  cultured, formerly wealthy Russians trying to make it in New York.   I met many from the nobility, and even more from the world of music, ballet and opera. Some married into wealthy American families,  others lived a life of near-poverty.  All were strongly anti-Communist.  My parents-to-be met in 1938, at The Russian Yar restaurant on W. 52 Street where he was headlined.  The Yar was one of scores of Russian Restaurants in New York, serving a great Russian cuisine, and featuring floor shows.

This was my heritage.  I didn’t know any English, and would only learn it in elementary school,  PS 93, on New York’s Upper West Side.   The Russian cultural center for my family and many other Russian-Americans was the Church of Christ the Savior (Khram Khrista Spasitelya) on Madison Avenue and E. 121 Street in East Harlem.   The children all attended “Saturday school,”  which included learning Russian grammar, and Russian Orthodoxy (Zakon Bozhii).  My father, together with Semyon Karavayev, a dancer,  organized annual gala cultural evenings with songs and dances; these were a high point in the world of Russian emigres in the 1940’s.  In 1947, my father was responsible for the cultural activities of refugees coming to the United States (DP’s) sponsored by the Tolstoy Foundation, headed by Alexandra Tolstaya.

As for myself, I attended great schools in New York:  Joan of Arc Junior High School, and Stuyvesant High School.  I was one of the first four Russian Majors to graduate from Columbia University.  After a few years in the private sector, I enrolled in the newly created Ph.D. program at New York University from 1964-1968.  The small program was taught entirely in Russian, which helped elevate my language skills from a “kitchen” to a “professional” level.   Founded by Robert Magidoff (an NBC correspondent in Moscow during WWII), its faculty included:  Zoya Yurieff, Leonid Rzhevsky,  Marianna Poltoratskaya, Halina Wittlin and Boris Unbegaun, to name a few.  I was one of the first to graduate.  Some of my fellow graduates found positions at Dartmouth, Swarthmore,  SUNY,  Michigan State, NYU, University of Arizona, Ohio State, and others.

As for me,  I made sure that my teaching included the best of Russian culture in addition to literature.  I developed a Russian Culture course in 1967 at Dartmouth aimed at lower undergraduates which I then taught for 40 years.  Before retirement I instituted a new course on the immigrant experience; an experience I have now shared with my readers.