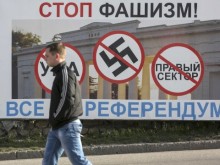 My parents’ generation used to evaluate virtually any geopolitical event according to what now looks like a comical standard:  “Is it good for the Jews?”  When invoked today, this question is both set-up and punch line, gently mocking our elders’ preoccupation with ethnic welfare while not entirely rejecting it, either.  The question is raised not out of hope that “the Jews” (whoever they are) might end up doing really well, but out of the fear that they will be screwed (again).

Unsurprisingly, this question gets raised most frequently about the lands our ancestors fled: Germany, Eastern Europe, and the former Soviet Union. To a literary scholar, questions straddle the boundary between grammar and syntax on the one hand and aesthetics and ideology on the other.   And on both counts, when the words “Russia” “Ukraine” and “Jews” appear in the same English-language sentence,  I prepare for the worst.

This may just be the product of immigrant lore (reinforced by countless high-school productions of Fiddler on the Roof), presupposing that “Jews” will occupy the particularly vulnerable position of direct object (usually of verbs like “beat,” “kill,” and “persecute.”)  The syntactical flip side is occupied by post-Soviet, anti-Semitic conspiracy theorists:  for them, Jews are the subject, while Russia and Ukraine is their helpless object.

But my pessimism also results from years of frustration with mainstream American narratives of Jewish persecution,  in which the tragedies of Jewish history (particularly twentieth-century Jewish history) occasionally get in the way of rational thought. So I watch with great trepidation as questions regarding Jews, neo-Nazis,and  fascism are repeated throughout the post-Maidan, post-Crimean Invasion American media.  Not because I believe Jews are in great danger from the latest Ukrainian revolution (I don’t), but because invoking a threat to Jews in the part of the world that Timothy Snyder so problematically names the “Bloodlands” is a cynical ploy to divert attention from what is actually going on.

Numerically insignificant in post-Soviet Ukraine, Jews are more important discursively than they are empirically.  Hilary Clinton’s ill-advised comparison of Russia’s annexation of Crimea to Hitler’s invasion of Czechoslovakia is not about Jews at all.  But where the specter of World War II is raised, surely the Holocaust is not far behind.

Barometers and the Jewish Problem

One might well ask: how do Ukrainian politics and Russian aggression become a “Jewish question”?  For my parents’ generation, of course, everything was a Jewish question, as indicated by an old joke about a Jewish student’s response to an essay question about elephants (“Elephants and the Jewish Problem”).  But we can also find a Cold War pedigree.

There is a postwar and Cold War habit of using Jews as a yardstick for the civic health of an East European nation, expressed as law in the Jackson-Vanick Amendment (restricting trade in response to restricted Soviet Jewish emigration).  Even my colleague Stephen F. Cohen got into the game in his March 2 appearance on Fareed Zakaria’s GPS. As evidence that Putin is the “most soft authoritarian of Russian rulers in centuries, he says:

And by the way, so far as it matters, because Jews and the status of Jews in Russia is often a barometer of how Russian rulership treats its society, Putin has been better for Russian Jews than any leader in Russian history.

Well, maybe.  Or maybe we need a different barometer. Maybe it’s just a sign that an authoritarian regime has found other groups to persecute.  But the lack of state-sponsored anti-Semitism in Russia is more than just “good for the Jews,” and less than an objective measure of Russian civil rule.  It also means that, for once, Russia can get into the Jewish barometer game.

The saga of “the Jews” and Euromaidan begins with the role of the neo-fascist “Svoboda” party in the protests and the new government.  This is clearly cause for concern, but (from an American post-“Fiddler” perspective,) hearing this concern raised by Russian authorities seems a tad ironic.  However enlightened official policy might be when it comes to the country’s Jewish population,  Russia is hardly free of anti-Semitic, neo-fascist forces of its own.  The chauvinist pot is calling the (black hundreds) kettle black.

Witness the clip from a scandalous interview on Russian television, now making the rounds on social media: Evelina Zamskaya, host of  Mnenie (“Opinion”) on the state-controlled “Russia 24,”  interviewing Alexander Prokhanov.  In a 45-minute dialogue about the horrors of Ukrainian revolution and Russophobia, Prokhanov makes a peculiar digression:

Prokhanov And do you know what’s surprising?  It’s that Jewish organizations—both European and our own Russian ones—they support this Maidan.  What are they doing?  Don’t they understand that they’re hastening a second Holocaust with their own hands?

Zamskaya: They hastened the first one, too.

It’s hard to say what’s more appalling in this exchange: is it that the notoriously anti-Semitic Prokhanov would invoke the Holocaust in the context of his alleged dismay about Jews’ blindness to their own upcoming victimhood, or that Zamskaya manages to make matters even worse by casually alleging Jewish responsibility for their own genocide seventy years ago?

Actually, neither.  What is most appalling, and most telling, is that someone like Prokhanov would be interviewed and taken seriously on state television in the first place. Prokhanov is the editor of  Zavtra (Tomorrow), a newspaper with a two-decade long record of  national chauvinism, anti-Semitism, and racism. Zavtra is a petrie dish for conspiracy theories, mostly revolving around Russia’s eternal victimhood at the hands of internal and external enemies.

Prokhanov’s path towards mainstream acceptance began over a decade ago, when his novel Mister Hexogen (the mutant literary offspring of The Da Vinci Code, Phillip K. Dick, and Mein Kampf) won the National Bestseller award.  Even so, asking Alexander Prokhanov about international conflict on state television should be as unthinkable as inviting Lyndon LaRouche onto Meet the Press.  When Alexander Prokhanov asks “Is it good for the Jews?”, all bets are off.

It’s touching to see the Russian government and Russian nationalist forces expess such concern for the fate of Jews.  But this newfound philosemitism is about something else entirely.  It’s not about Jews.  It’s about the space that Jews have occupied in the national mythology.

Fear of a Diasporic Planet

As early as 2007, Putin offered some insight into his feelings about the post-Soviet dispersal of the Russian population:

Twenty-five million Soviet citizens who were ethnic Russians found themselves beyond the borders of new Russia. Nobody gave a thought to them. Is it not a tragedy?

Well, no, not as such.  A problem, certainly.  But a tragedy? Since when does population distribution beyond national borders rise to such a level?

This is not simply a matter of imperial nostalgia.  Instead, it’s about a deep discomfort with taking on the position of the minority.  Listen to how the words “minority” and “majority” are deployed on state television talk shows, particularly during the controversy over the 2013 “gay propaganda” ban.*[1]  Discussions about minority rights repeatedly become fears of a minority takeover.  That is, somehow the majority population will immediately becomes subject to the whims of a newly-empowered minority.

Russian right-wing demonology has always posited the Russian nation as the helpless victim of a predatory minority.  The irony is that the minority they usually have in mind is, of course, the Jews.

But the irony doesn’t stop there. Irony, being irony, stops nowhere. In becoming a nation spread out in dozens of countries, but a minority in all but one, Russia finds itself in an almost uncanny position, “uncanny” in Freud’s sense of being familiar and unfamiliar, “home” and not-home.  Russian nationalists don’t want Russians to be the new Jews.