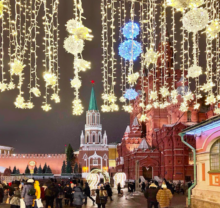 Christopher Tremoglie attends the University of Pennsylvania, where he is majoring in Russian and Eastern European Studies and minoring in Political Science.

In the United States, the Christmas season is winding down — or concluded depending on whom you speak to. The “most wonderful time of the year” typically ends after the celebration of New Year’s on January first. Yet, in Russia, the Christmas holiday is just beginning. Many people may not know that 7 January is the day Russians celebrate Christmas — a different celebration than ones to which many Americans are accustomed. Fortunate enough to travel abroad through the University of Pittsburgh’s Summer Language Institute, I was able to learn about some of the customs of Russian Christmas.

“It is a big religious holiday,” says Muscovite Karina Muzyka.

The difference in dates is not the only disparity between the two culture’s respective celebrations of the holiday. In Russia, Christmas is considered a smaller, quieter holiday that follows the big, festive New Year. New Year’s Eve is the holiday whose customs most mimic Christmas in America — a relic of the early-Soviet past, when the Bolshevik leadership sought to draw attention away from religious rites toward secular ones. On New Year’s, Russians celebrate with eating, drinking and other forms of festive merriment. It is also the day in which Grandfather Frost (Дед Мороз), the Russian version of Santa Claus, brings presents to children.

Grandfather Frost does not have the conical-style cap associated with Santa but instead wears a rounded Russian cap trimmed with fur. Instead, he is generally depicted in a long, Russian-style coat that is either red, icy blue, silver, or gold, and lined or trimmed with white fur. He carries a staff and has a long, white beard and has boots to keep his feet warm. Grandfather Frost makes his journey in a traditional Russian sleigh, festooned with an evergreen tree. Notably, the sleigh requires only three horses – unlike that of Frost’s North Pole counterpart, who needs eight reindeer! Grandfather Frost’s home is in the Russian town of Veliky Ustyug, as opposed to the North Pole.

There are varying accounts of what contemporary Christmas customs entail in Russian society. “We’ll have a celebration dinner,” says Nastia Morozova, a teacher and recent graduate of Moscow State University. “But that’s all.”

“Customs at Christmas are only associated with the church,” Muzyka said. “There are customs in the days before Christmas, however. For example, fortune telling.”

Fortune telling or Svyatki (Святки) is one popular feature of Russian Christmas, though it is discouraged by the Church. This is usually done on Christmas Eve, January 6. According to custom, “dark forces” must be present for a fortune to be told and the place where it is told should be considered “evil” and “dirty.” Examples of appropriate locations for fortune-telling include abandoned houses, cemeteries, or, in older times, bath houses. Another tradition advises journeying to a crossroads, where one might meet the devil himself. Should none of these options be available, fortune-telling can occur at home. All one has to do is turn off the lights, remove and hide all icons and religious imagery, and light some candles before fortunes are read. The fortunes are revealed through methods like coffee-grounds reading, or by holding a candle to a mirror in a dark room.

Russian Christmas typically begins with the first star in the night sky on January 6, which symbolizes the “birth of Christ and a signal to start Christmas dinner and the holy supper.” A Russian Christmas dinner may start with a prayer and feature twelve different entrees in honor to the twelve Apostles. Some families’ dinners are Lenten (without meat) while others feature an abundance of meat such as pork, chicken, venison, lamb or a goose. A main dish served during the holy supper is kutya — a porridge containing whole grains, honey, and poppy seeds.

Other popular Christmas cuisine includes borshch, solyanka, kozulyi (Russian Christmas cookies) often made in the shape of goats or deer, and vzvar, a sweet drink made from dried fruit and honey boiled in water. Afterward, families may go to a midnight Church service or children may go carol-singing around the homes of friends and family. Often, the carolers are given cookies, candy, or money as a token of appreciation.

So, while in the United States, our Christmas season has concluded, in Russia it has just begun. There are a number of cultural differences but it seems one common theme is the camaraderie that comes with family time and, of course, eating. С Рождеством! (Merry Christmas!)