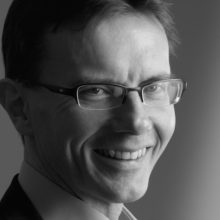 On January 29, 2019, the Jordan Center hosted Nigel Gould-Davies for his talk “Russian Elites and Western Sanctions: A Political Economy Under Strain?.” Dr. Nigel Gould-Davies is currently Associate Fellow of Chatham House and teaches at Mahidol University in Thailand. He previously taught at Oxford University before joining the British Foreign Office, where his roles included head of the Economic Department in Moscow and Ambassador to Belarus. The talk, as part of the Occasional Series, was introduced by NYU Assistant Professor of Politics Arturas Rozenas.

The talk primarily explored the degree to which the latest rounds of sanctions imposed by the West on the Russian oligarchs have been effective, and explored the possible ways the oligarchs can react to the financial constraints. The question mark at the end of the title signifies the lack of a definitive answer to the question. In his preface to the talk, Dr. Gould-Davis defined the oligarchs as the set of businessmen who accumulated a vast amount of privately wealth after the collapse of the Soviet Union, while noting that in Russia, due to conditionality of property rights, the concept of “privately owned wealth” is a relative term. Gould-Davis also drew a distinction between the oligarchs and “Silolarchs”, or the wealthy individuals with ties to security services. The United States and European countries began to impose the sanctions in 2014, marking the first time in Russia’s post-Soviet history that the West decided to ostracize, Russia from, as opposed to integrating Russian into, the global economy. Despite a constant decline in security relations between Russia and the West since 2004, the desire to integrate Russia remained undimmed until recently, explained Gould-Davies. This recent wave of sanctions is unique for three particular reasons, which Gould–Davies described throughout the remainder of his talk.

The first reason is that these fresh sanctions “mark the first time in the entire history of Russian / Soviet and Western relationship where the major economic constraint comes from the West rather than from Russia.” As an outsider to the global capitalist system, the Soviet Union faced minor constraints from Western sanctions, making this current economic relationship entirely unprecedented. The sanctions also effectively succeeded in creating political shock in Russia by undermining Putin’s attempts to “manage Russia’s economic relations with the West,” both as a means of wealth acquisition and exertion of power. The final distinctive feature of these sanctions, explained Gould-Davies, is the very way in which sanctions have been reconceptualized: no economy the size and scale of Russia has ever been targeted with such drastic sanctions, propelling the Western countries to be particularly innovative with how to devise these sanctions. Not only is this a major moment in Russia’s history, but this also marks a turning point in the history of international relations.

Dr. Gould-Davies segued into the next segment of his talk by explaining how the sanctions have noticeably harmed Russia, with a growing degree of concern shared by both senior officials and the general populace serving as the greatest indicator of the trauma. Even political elites with fundamentally diverging opinions, such as the liberal economist Alexei Kudrin members of the conservative Siloviki, are beginning to agree that sanctions are posing a major threat. The end-goal of the sanctions, Gould-Davies explained, is to push Russia to alter its policy, rather than to radically change the political landscape. The idea that sanctions are viewed as a means to mobilize ordinary people from below to take action against their own governments, is, according to Gould-Davies, a misconception. Sanctions are not merely a “blunt instrument to hurt an entire country,” but are a much more sophisticated instrument crafted to target specific individuals. Likewise, change, according to Gould-Davies, generally happens from within regimes rather than from the outside. Citing Henry E. Hale’s book “Patronal Politics,” Gould-Davies explained that change in post-Soviet states only occurred when the political elite defected from their leaders. A strong regime can only “weaken and disintegrate” from within, and therefore, experts must look at “how the elites are thinking” and observe “the opportunities they have to turn their preferences toward policies of change that protect their interests more effectively.”

The Russian oligarchs, who are currently bearing the heaviest burden of the sanctions, have always been a “source of great fascination” in the West because of their large levels of influence in the 1990s: they’ve financed political parties, they’ve owned massive media outlets, and have generally exerted large amounts of power in a very visible manner. During Putin’s early years, the oligarchs were, however, “swiftly brought to heel under the power vertical system,” and have ceased to be an area of study. Concurrently, their visible power began to wane, and their image in the Russian public diminish. Gould-Davies continued by shifting his focus to the present-day oligarchs, who have had “deepening” financial ties with the West, and for whom 2018 proved to be “their worst year.” Oleg Deripaska’s excision from the global financial market, coupled with Roman Abramoviche’s failure to receive a British visa, demonstrate the extent to which the sanctions are depriving the oligarchs of their Western assets.

Initially, the Russian state supported the oligarchs in their quest to deepen their security ties with Western markets, as the state saw the oligarchs as vehicles through which it could exert its global economic influence. The oligarchs became beneficiaries in the West, serving to improve Russia’s financial property and public relations sectors. But after Putin’s 2012 presidential victory, the mood towards globalization began to drastically change: globalization was now perceived as a threat, and Putin called for the oligarchs to “deoffshorize,” or return their assets back to Russia. Likewise, the question of loyalty began to bother Putin: by deepening their ties with the West, could the oligarchs ultimately defect? The Kremlin ideologue Alexander Dugin’s term “6th column” was designed specifically for these Western-entrenched Russian oligarchs. Because the oligarchs ignored Putin’s demands to deoffshorize, the Russian state recently began demanding tax increases and larger domestic investments. The position of the oligarchs isn’t helped by their reputation among the Russian public, which was greatly tarnished in the early 2000s. The oligarchs, who are currently losing their assets in the West, and who have fallen out of favor domestically, are now confronting a desperate and unprecedented reality.

Dr. Gould-Davies devoted the final segment of his talk to delineating the potential choices that the oligarchs could take. The first choice involves finally complying to deoffshorization demands: by heeding to Putin’s demands and choosing to commit to Russia’s development, they can in turn save their domestic reputations. The second option, which Gould-Davies claimed was the least likely of the four, involves the complete antithesis to the first: defecting to the West and cutting ties with Russia. The third, and least drastic, is to avoid making a choice: by keeping their heads down, the oligarchs can hope that the storm will eventually calm. The last, and “most intriguing option,” is for the oligarchs to use their wealth and connections to seek change from within, to shift the political economy into a new directions. Their tarnished reputations make it nearly impossible for them to hope to mobilize the general population for change, so they will have to look inward to make any changes. But making any bold prognoses on either of these choices, explained Gould-Davies, is virtually impossible, as Russia’s under-institutionalization makes the country incredibly prone to swift and unexpected political and social changes.

In the Q&A section, NYU Politics Professor and Jordan Center Director Joshua Tucker asked whether or not anybody within the political system, or in the Russian populace, see Putin’s actions as the main trigger for the sanctions. Professor Davies responded by explaining that Putin himself is rarely ever blamed, and that policies and circumstances come to the fore when blame is dispatched.