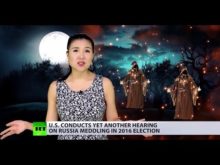 In order to ensure its own survival, the system must keep Vladimir Putin happy. Nothing makes the creator of a counterintelligence state happier than a few good victories. “See, Vladimir Vladimirovich, we have nailed those Americans! Now they’re try to ban RT in the USA! That’s a success! And listen to what a great job Margarita Simonyan did repudiating them! We need to put more money, resources, and support into this, since it gives us a way into the US domestic conversation!” – and Putin signs a new budget check for RT/Sputnik, and dispatches a memo from the Russian Security Council with “new policy goals”. Whatever Western governments impose on RT and its siblings – severe service limitations, a “foreign agent” label, or even expulsion from their territory – will only empower the RT/Sputnik system (because the reason for its existence is not influence but disruption) and will gradually provoke another spiral of Russian ingenuity that will design something new and possibly more malicious.

Once again: nobody in Moscow cares about what really happens in the United States, or what will happen. All that matters is that RT/Sputnik/the Russian domestic media can report this to Putin as their success. More hysterical articles on fake news? – We did it! More scrutiny on RT? – They fear us, which means we’re efficient. A new wave of sanctions – perfect! That’s happening because Americans want to destroy Russia. This paradoxical reaction, as a matter of fact, is an integral part of “Putin’s thinking”.

Russian propaganda warriors do not care about local American or European audiences. Nobody in the Kremlin is going to make a reality check here: in the Russian mindset, cheating is fine as long as the teacher likes the outcomes.  Neither RT, nor the “trolls” are interested in any real influence over US audiences – they genuinely believe Americans are stupid and vulnerable to manipulation. The goal is to make the Western system as such react to their work. If it generates buzz they will gladly file it into their budget requests (never forget – they are paid for that by Russian state budget).

In the days of the Soviet threat, “Sovietology” was born. Today, a whole new breed of experts are striving to create “meddlingology” – an imaginary discipline that consists of attributing all the faults of the American political system to Russian incursions. I may sound like an RT “columnist” here, but for God’s sake, KGB agents didn’t steal all the bicycles in Amsterdam.

Information/influence operations were not invented by General Gerasimov (as Molly McKew thinks). They have been around since antiquity, when no Russians even existed. Hybrid warfare was not cooked up in the Russian General Staff Academy, but by the British War Cabinet in the flames and smokes of the Great War. The digital offensive in Estonia in 2007 was not the first cyber war, not even the second one, but this is an easy mistake for amateurs to make. There is one thing novel here, and it’s lying in a plain sight: the hybrid warriors are perfectly happy to admit what they’ve done! Caught them lying? – no problems, RT says, everyone lies. Caught them shooting down MH17? –Ukrainians shot down a Russian passenger plane in 2007, and the evil Americans destroyed Iranian Flight A300 years ago! If Russian warfare is “hybrid”, it is first and foremost shameless; what the counterintelligence state despises is reputation (including its own).

Tomorrow: What Is to Be Done?