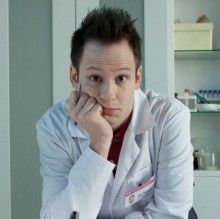 Harry Leeds lives in Russia and writes about culture and food (harryleeds.com).

Albina is embarrassed because I must think she’s stupid. She speaks English with a foreign accent, and she makes mistakes. I do too, I say. I say it’s not her first language. Albina feels a little better, but she just doesn’t know.

“Say, now wait a second, there,” I say. “Do you think I’m stupid cause of the way I speak Russian?”

She giggles. “Well,” she says, “you talk funny. You remind me of Phil.”

Phil is an American character from the Sitcom Interny or “interns”, the Russian remake of Scrubs. The story is that Phil is an exchange doctor from Princeton-Plainsboro hospital (the home base of the wildly popular Dr. House). Phil’s Russian is by my estimation incredibly good (kudos to the actor Odin Biron for learning Russian so well), and his dialogue is clearly written by an intelligent native speaker of Russian. Occasionally, it will take a moment for Phil to form his thoughts, but he speaks not only with perfect grammar, but is able to use high level words and alternative between formal and informal registers at a rate difficult for some Russians.

But the thing about Phil is he has a wee little accent. Sometimes his soft L’s aren’t that soft, his rolled R’s are rolled, but they seem a little, you know, just not right. Like he’s stupid.

No matter that he’s doing his medical internship in a Russian hospital.

Phil likes to do what are apparently American things. The characters on Interny see Phil’s accent in his worldview and actions. In one episode, he finds an accounting error and brings it to the attention of the Chief of Medicine. The Chief says, are you sure you want to have her reprimanded? Phil says, yes, the accountant made an error. The Chief says, you know that this accountant is also your girlfriend, right? Phil says, yes, she’s my girlfriend, and I care oh so deeply for her. But here, you see, now this accountant made a mistake and must be brought to justice.

The joke is that Americans want to do everything so right that we’ll put our own in danger. Phil seems unable to reconcile the two parts of one person, instead treating them like different characters entirely. Haha, America.

But wait? Are so so concerned with Justice that we rat on our loved ones? If we do, it’s pretty sick.

Another episode has Phil attempting to solve Russian riddles. He must be stupid, or, at least simple, because he doesn’t understand Russian logic which is obvious to children.

“What is the same color in Summer and Winter?”

If you said a pine tree, so did Phil.

Angry? A pine tree isn’t a Christmas tree (which is what, anyway? Spruce?). Phil is incensed. Lots of things don’t change color.

But Phil must be stupid, because even little kids know the answer to that one! Is it possible that they heard it from their older siblings, and that they aren’t just geniuses with a different mentality?

This got me wondering about other riddles which might be hard for my American mind, and so I asked around. Here are some riddles said to explore the mentality of a Russian.

“What has two ends, two rings, and a little nail?”

“What doesn’t bark, doesn’t bite, and let’s people inside?”

A lock. Sure, also a doorman, but that’s not the right answer. Come on now, even little kids know this!

The kicker: “What has no windows, no doors, but a room filled with people?”

A coffin? No. A jail? But this is for children.

The answer is: a cucumber.

I guess the seeds are like people. The lack of windows and door, is, of course, self explanatory.

I was laughed at well and good enough for my answer of “coffin”. It’s cute, right? And having this “accent” is the closest to “charming” as it gets. But then I tried to turn it around and ask about the American consciousness, “Why do firemen wear red suspenders?”

“Okay. What’s black and white and read all over?”

“They’re everywhere. White people, black people, and American Indians.”Yikes! And all she had to say was a zebra with chicken pox. Well, I guess it’s tough both ways.

It seems a little offensive to laugh at someone’s accent, especially if he speaks well. In America, and especially New York, one can go dozens of blocks (depending on which Avenue) without hearing a standard American accent, and people who learn English imperfectly are as prevalent as the New York Times.

Russians don’t encounter many who speak Russian imperfectly, as a second language. You can speak high Russian or use a lot of curse words, or speak a special high form with a lot of curse words, or make a prescriptivist-style mistake here and there, but, aside from some guest workers, most people walking around either speak Russian as a native tongue or they don’t. That’s why the accent isn’t cute, but funny. It’s unexpected. It’s an anomaly, and if someone is laughing at your accent, it means you have pretty good grammar, which is an achievement in itself.

In another episode of Interny, the Chief of Medicine has to give a speech in English at a conference in London. Phil agrees to help, and as she practices by reading The Three Little Pigs, Phil pretends to find her voice too sexy for her to go on (he in fact just wants the awful English to stop). The actress, it turns out, speaks good English and is faking the bad accent for effect, (which, though clearly intended to seem poor, isn’t bad–she also uses colloquialisms that a beginner would be unlikely to master). But it is pretty funny for the audience to watch the poor English come from someone so confident. Russian viewers can ask themselves, “Wow, do we really sound like that? I guess Phil’s flawless Russian isn’t so bad even with the accent.” Perhaps the Russian audience finds Phil’s accent so funny because they are little insecure about their own foreign language skills. So the insecurity isn’t just Albina’s, but shared by many.

I don’t know if it was some teacher or relative who told Albina that that she was stupid. Or if it was poorly calculated hyperbole.  I don’t think Albina is stupid, and if I thought she were stupid, it wouldn’t be over her accent. Maybe she heard my Russian and thought, “Jesus, I don’t sound like that, do I?”