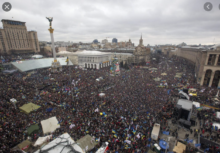 Taras Kuzio is a professor in the Department of Political Science at the National University of Kyiv Mohyla Academy and a Non-Resident Fellow in the Foreign Policy Institute at Johns Hopkins University. He is the author of Crisis in Russian Studies? Nationalism (Imperialism), Racism and War.

It would be difficult to find another country besides Ukraine that has elicited so many scholarly publications on the topics of its regionalism, threats to its territorial integrity, and the well-nigh civilizational divide between speakers of related languages used on its territory. Ukraine has allegedly been on the verge of disintegration on numerous occasions, ever since a National Intelligence Council estimate was “leaked” to the media in 1994.

The numerous Ukraine-related articles, books, and intelligence reports collided with reality during the 2014 crisis, which exposed the weakness of their analysis. Russian President Vladimir Putin’s so-called “New Russia” (Novorossiya) project for Eastern and Southern Ukraine proved to be a complete failure, with pro-Russia rallies attracting tens or a few hundred supporters at best. This outcome occurred despite Russia introducing a range of policies subsumed under the general heading of “hybrid warfare,” successor to the “active measures” of the Soviet era. These measures included an information and disinformation blitzkrieg, a deployment of intelligence officers on the ground, Russian spetsnaz forces led by Igor Girkin, financing, “political tourists” bused in from Russia and the Trans-Dniestr region of Moldova, Russian nationalist mercenaries, Chechens loyal to President Ramzan Kadyrov, and military equipment.

Five factors explain the failure of Putin’s “New Russia” project and clarify why Ukraine did not disintegrate in 2014 despite pressure from the Russian military and hybrid warfare.

First, post-Soviet studies of Ukraine’s regional diversity ignored the impact of Soviet rule, which had brought Ukrainians together within a Soviet-Ukrainian homeland, albeit as part of the USSR. Soviet Ukrainian civic patriotism and national communism, as well as dissident patriotism and nationalism, were perennial problems for Moscow, including in Eastern Ukrainian regions such as Dnipropetrovsk. The Ukrainian SSR was the second most populous Soviet republic, home to a large and advanced Soviet military-industrial complex, and a founding member of the UN. This legacy led to widespread support for territorial integrity, the creation of elites perpetually distrustful of Moscow, and high levels of civic engagement (as reflected in two color revolutions). Since 1991, Ukraine has shown itself to be very different from both Russia and Belarus.

Second, the traditional division of Ukraine into four areas — West, Center, East, and South — in both Western and internal Ukrainian surveys has historically been problematic, and not only the East. For example, though Ukraine’s “West” includes seven oblasts in Western Ukraine, Trans-Carpathia is very different from the three Galician oblasts. In the 2010 presidential elections, Trans-Carpathia was the only Western Ukrainian oblast to vote for pro-Russian candidate Viktor Yanukovych. As for the East, conflating the two Donbas oblasts with Dnipropetrovsk was problematic in itself. Meanwhile, including Crimea (with its ethnic Russian majority) alongside Kherson (with its large number of Ukrainian speakers in the South) gave similarly unreliable polling results.

The lumping-together of regions has become an even more vexed proposition since the 2014 crisis. Dnipropetrovsk’s identification with the Donbas was always tenuous, and the war only spurred a strengthening of Dniproptrovsk’s identification with East-Central Ukraine. Geography and political affiliation did not necessarily match; while Dnipropetrovsk was always included as part of Ukraine’s “East” (and sometimes as part of its “South”), the Dnipro river — often regarded as the heart of Central Ukraine — runs through the center of the city of Dnipro. A similar re-identification has occurred in the three neighboring oblasts of Zaporozhzhya, Kherson, and Mykolayiv. Pro-Russian sentiments and Soviet nostalgia have all but disappeared from these four oblasts, however technically “Eastern” they might be.

Kharkiv scholar Tatyana Zhurzhenko observed five years ago that Ukraine’s “East,” which until the 2014 crisis had encompassed eight Russian speaking oblasts in Eastern and Southern Ukraine, no longer exists. The former pro-Russian “East” now consists only of Donetsk and Luhansk (Donbas), which is divided between Ukraine and Russian-controlled territories. The Party of Regions dominated Eastern and Southern Ukraine prior to 2014; the pro-Russian Opposition Platform-For Life primarily receives votes in Ukrainian-controlled Donbas.

Third, anti-(Euro)maidan protests transformed into armed insurgency in only two regions — Crimea and Donbas. This outcome is correlated with the fact that these two regions were always different from the remainder of Eastern and Southern Ukraine in having 30-40% support for “separatism” (defined as combining support for the joining of their region with Russia, or creating an independent state).

Fifth, the terms “New Russia” and “Russian World” were nebulous and often misunderstood in both the East and South of Ukraine. The first term had not been used for over a century, so some disorientation was to be expected; even Putin confusingly included Kharkiv in the Tsarist guberniya.  The second only had resonance in regions like Crimea and the Donbas, where some Ukrainians retained a Soviet identity. The “Russian World” is associated with “Russia” as the successor state to the USSR, led by Putin, who laments the disintegration of what he views as the mighty Soviet state.

Together, these five factors show that much of the writing on Ukraine’s regional diversity prior to 2014 was wrong, and had crucially never studied the phenomenon of Russian-speaking Ukrainian patriotism. Why was this the case?