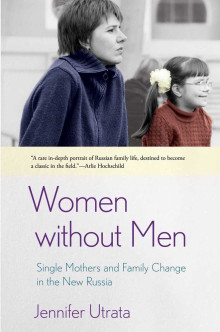 Anna Shadrina is Ph.D. student at the Department of Psychosocial Studies at Birkbeck, University of London (UK).

Last year saw the publication of a book that I had been waiting to read for a decade. In Women without Men: Single Mothers and Family Change in the New Russia”(Cornell University Press, 2015) Jennifer Utrata addresses the transformation of intimacy in the post-Communist era. In an in-depth study of the transition from state socialism to market Utrata finds that one of the most significant implications of this social upheaval in Russia is the growth of single motherhood. As a Belarusian graduate student ten years ago,  I started my own research project that aims to explore the experiences of single women living in post-Soviet Belarus and Russia. Influenced by the economic turbulence of the transition period, the spread of contraception and the media stream that brought in Western cultural norms, the population began putting off marriage, choosing to cohabit or to live alone,  and having children outside of wedlock..

In 2005, just before I turned 30, I found myself well-established in my career (by that time I had worked as a journalist for a decade): single, childless, bored and anxious. On the one hand,  by this age women in that part of the world are expected to “settle down” – to find a male partner and to become a mother. Otherwise a woman should be prepared to deal with the stigma imposed by the institutions of the family, medicine,  and mass media. On the other hand, by the time I was 30, I had met many female peers whose life trajectories did not fulfil these expectations.

Part of the confusion that arose stemmed from the fact that none of these changes in the family were being publicly articulated. No explanation was offered to understand whether there was something wrong with the women of my generation or with the world we lived in, given that our mothers led a quite different lifestyle. They did not deal with the same “reproductive choices” (having a first child in one’s early 20s was an institutionalised practice during the Soviet period), nor they were concerned with “social mobility” as  Soviet society was classless, closed and guarantied employment.

At the time, the only source of information about the global transformation of relationships available to a wide audience was the American TV series “Sex and the City,” which was translated into Russian and broadcast on TV. Regardless of its debatable feminist message, for many of us the program was quite a relief since it told us that women’s life is not all about motherhood and chores. Nevertheless, post-Soviet women over 30 could not fully associate themselves with the glamorous Manhattanites from “Sex and the City.”

When Russian producers attempted to make a domestic equivalent to HBO’s tales of Carrie Bradshaw and her friends, they fell back on Soviet stereotypes of the sometimes tragic, sometimes ridiculous unmarried woman.  “The Balzacian Age or All Men Are Basta…” (with a reference to a novel by Honore de Balzac “30-year old woman”) turned out to be a sitcom featuring women as desperate for commitment as the men are desperate for independence. As clumsy as the show was, it was a sign that Russian TV professionals understood the importance of the subject matter, even if they lacked the analytical tools to address the paradigm shift in gender relations.

Clearly, television was not going to provide answers to the questions that troubled me, so  I enrolled in an MA program in Gender Studies.  My goal was to do research on women who arranged their private-lives in a non-traditional fashion, outside of conventional, cohabitational partnerships. At that time I could not find a single book on life outside marriage in any former USSR republic.  So I would have to write my own . In 2014, NLO Новое Литературное Обозрение) published my first book, “Single Women: Sex, Love and Family Beyond Marriage in Contemporary Belarus and Russia” (Не Замужем: Секс, любовь и Семья за пределами брака). Writing this book was a challenge, as I had only Western research on singles to draw upon.

And now, Jennifer Utrata’s timely and long-awaited book has been released.  While the book is about family life in Russia, readers from many former Soviet republics will recognize its relevance, as, as they share the same Soviet past and witness some common post-Soviet sociopolitical processes: the emergence of class inequality, the establishment of neoliberal social policy,  and the rise of  traditionalist ideologicy.

In her book Jennifer Utrata was able to articulate what in Russia has been routinized and, therefore, remains “invisible” and unproblematized. Russian women and men see the prevalence of single motherhood as a function of the lack of reliable men and a weak, unsupportive state.  In Russia, a distinct family structure has been formed as a result of the country’s high divorce rates, a considerable difference in life expectancy between women and men, and the family ideology endorsing strict division of gender roles  As in the West, the Russian nuclear family includes two adults raising the children; the difference is that, in the Russian case, those adults are often a mother and a grandmother.

All the Single Ladies

The proliferation of families with single mothers is not unique to Russia. Rates of single parenthood have tripled since 1960s as a share of American households. In addition, at least half of all U.S. children will spend part of their childhood in a single-parent family. More than half of first births to women under the age of 30 now occur outside marriage. Nonmarital birth rates depend on structural factors. Single motherhood is more common among Americans without a college degree; 68 % of all American single mothers are African American, 43% are Hispanic, and 29% are white.
In Russia over the last two decades the number of unmarried mothers at least has doubled. By 2010, 24.1 percent of the total number of families in the country was headed by single mothers. Interestingly, however, Utrata’s book reveals that in the case of Russia single mothers do not necessarily differ from other mothers,  as Russian men normally have little practical or emotional involvement in household duties.

Given that several generations of Soviet people grew up without fathers after the enormous loss of the male population during the Second World War, family life there has long relied on cross-generational assistance among women. This condition has estranged men from their roles as husbands and fathers. As Utrata’s research demonstrates, what makes a mother feel isolated in Russia, regardless of her marital status, is often the absence of her own mother’s support.

Utrata points out that the traditional fragility of marriage in the country is explained by the vicious cycle produced by a family policy that historically rests on the strict division of gender roles. For Russian men the culturally accepted ritual of “doing gender” is strongly associated with heavy drinking, which serves both as a symbol of masculinity and a compensatory practice due to many men’s inability to support their families. In the new economic paradigm this tendency has only been exacerbated. Thus, spared from domestic responsibility,  men have time to drink. In turn, drinking prevents men from sharing in domestic labor and provokes violence and infidelity. No wonder that many women prefer to cope solo.

While most men in Utrata’s study claim that their main obligation as fathers is to provide for their families, many of them consider the support of their non-resident children to be optional. Neither the pressure to combine domestic labor with paid work, nor the cost of raising children that falls primarily on women is problematized in the stories that Russian men tell about themselves. Non-resident fathers interviewed by Utrata rationalize these asymmetric family responsibilities, referring to and embracing a low bar for fatherhood based on a biology essentialist view on gender roles. In other words, Russian men are estranged from family routine simply because no-one expects their involvement.

On the contrary, single mothers are expected to take over breadwinning and childrearing without complaint, as motherhood in Russia is declared to be “women’s natural duty.” In the context of neoliberal cutbacks in the welfare state, in contrast to the Soviet system of social support that provided many maternal benefits to allow mothers to navigate the family/work balance, single mothers in the new Russia turn out to be abandoned by the state and their partners, relying on their own mothers’ help.

Significantly, the dynamics presented in Utrata’s book only have intensified since she conducted her fieldwork in 2003 and 2004. Ten years after Utrata conducted more than 150 interviews with women and men living in the midsized peripheral city of Kaluga, Russia’s internal political discourse is dominated by a single theme: the “return to traditional family values.” One of those values that allegedly needs to be protected and reinforced is the institution of marriage between a man and a woman.

Concerned with the increased divorce rate, low fertility and dramatic premature mortality among men, Vladimir Putin’s government turned towards the time-honoured traditional Soviet method – the promotion of the nuclear family and the encouragement of women to have more children regardless of their economic circumstances. However, this time such encouragement is not underpinned by a concomitant welfare strategy, as the Soviet system of social security that guarantied state supported childcare facilities, working places, provided free medicine and accommodation is no more.

Paradoxically, regardless of the obvious instability of marriage, the new Russia’s welfare system delegates the responsibility of citizens’ well-being to nuclear families, leaving behind a crucial portion of the population who do not fit into heteronormative cultural norms and ignoring the fact that the traditionalist division of gender roles is one of the main reasons for divorce in Russia.

A Good Man Is Hard to Find

The mainstream media channels explain the rise in single motherhood and the fragility of marriage by referring to a moral decline among women. The “traditional family values” ideology and the new post-socialist “freedoms” have sparked a moral panic. This, in turn, has fostered a new consulting industry for women,  promising to teach them how to get a “right man” and how to keep him (women’s best strategy for a good life). In light of the neoliberal cut-backs in the welfare state and the growing competitiveness in the job market that render the work/life balance for women harder to achieve than ever before, this message comes through loud and clear.

This new mythical figure of a solvent man is being offered to women as a means to deal with their double burden. Unlike the Soviet system of social security that provided conditions for women to combine family responsibilities with work outside home, the current family ideology promotes the idea of paid work for women as an unwanted option. No longer able to support the well-being of families, the state advises women to become dependent on men. But again, as Utrata’s book reveals, in reality most Russian men are not very enthusiastic about this idea.

Thus Women without Men is an excellent study of contemporary Russian gender order and family, but also a powerful antidote against the toxic myth about the “right man” who is supposed to be a good  substitute for essential social reforms.