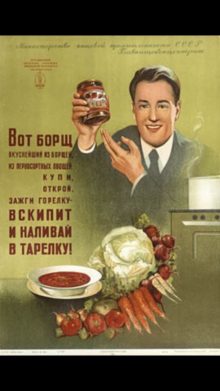 A grieving Russia turned to the healing process after revelations that a couple in the sleepy southern city of Krasnodar had eaten their fellow citizens.

Maya M. lived in the apartment block next door. “They were such a normal couple, they always kept to themselves and they never greeted us. This is such a violation of our community’s sense of solidarity. How can you trust your neighbor when she sees you like a sausage?”

Walking down the aisle at the local supermarket, Dima K. faulted the economy. “I am not pro-cannibalism, that’s the honest word, but with prices what they are…?”

His companion, Alesha O., was not so sure. “The sanctions have driven us to this. I’ve been eating Bush’s Legs since 1990 and it’s time we valued our domestic production.”

The US embassy, meanwhile, hosted an evening of mutual understanding and served a variety of alternative dishes with nut-free options. “It is important to recognize that average Americans and average Russians are alike. Our nation was founded on such banquets in Jamestown and the pioneer spirit showed itself at Donner Pass. We have so much to learn from each other.”

An online protest led by the oppositionist Alexei Navalnyi demanded an explanation while three of his supporters poured onto Moscow’s Pushkin square in a day of mass outrage. “Our popular wealth is being squandered by corruption. We have the right to a full accounting. We have it on good authority that part of it is now in the Cayman Islands.”

Kremlin spokesman Dmitrii Peskov issued a speedy rebuttal: “The Russian Federation government practices the most thorough accounting and health vetting of all food products. It is stupid to suppose that we somehow stole the supplies in question or that they were not of the highest quality. Our wealth is people.”

The Moscow patriarch appealed for charity: “The Russian people have been selected for special suffering for the past 6,000 years. We offer forgiveness to those who ask, so long as the cannibals in question are not engaged in unnatural acts.”

Russian commentator Julia Ioffe posted on FaceBook: “It is well known that Putin has practiced cannibalism since his KGB days in Germany and we know he gave the orders. Everyone just knows it. Only a lackey of the Kremlin #StephenFCohen would deny it.”

New Yorker editor and Russia hand David Remnick was pensive: “Putin is an autocrat who consumed civil society. Russia missed out on the Renaissance.”

The White House took away the President’s smart phone in a pre-dawn raid.