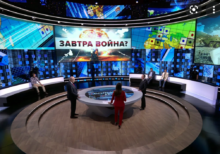 Beth Knobel is an Associate Professor of Communication and Media Studies at Fordham University.

For years, Russian television has been saturated with political talk shows. Cheap and relatively easy to produce compared with shows needing actors and scripts, these “informational-analytical programs” help the Putin regime flood television airways with its chosen messages. There are so many of them that they’re hard for anyone watching television in Russia to avoid. While this genre of show has existed for many years, the informational-analytical shows experienced a renaissance during Putin’s third term, when he returned to the presidency after Dmitri Medvedev.

Although many of these ongoing talk shows purport to provide expert analysis of political events, they are in fact all skewed towards supporting the government’s positions. They’re part of the “firehose of falsehood” that the Russian government shoots out to the world.

The political talk show that grabs the most headlines is Rossiya 1’s Vesti Nedeli, whose incendiary host Dmitry Kisilev seems to be in the news on a regular basis for some racist or nationalist rant. But the most interesting to me is the erudite and measured talk show The Great Game [Bolshaya Igra], which has been airing on the First Channel [Pervyi kanal] since 2018.

In a way, this show is typical of the genre. Around an hour long including commercial breaks, The Great Game features two hosts, a moderator, and a rotating cast of expert commentators. Rather than just having Russian panelists, the show’s defining feature is that it purports to present both the Russian and American perspectives, with a host and guests from each nation.

The Russian host is Vyacheslav Nikonov, a long-serving member of the lower house of Parliament (the State Duma) and grandson of Vyacheslav Molotov, who served as foreign minister under Soviet leader Joseph Stalin. The American view is represented by the second host—Dmitri Simes, a Russian émigré to the US who heads the Center for the National Interest think tank in Washington, DC and is a well-known political analyst.

The show’s website explains that these two hosts “are not only representatives of the two countries, but also people who reflect their political mentalities. They understand how the political brain of Russia and the political brain of America work.” The foreign host and large number of international guests on The Great Game reinforces the impression that the West still wants to engage with Russia on issues of global importance, despite Russia being hit with sanctions and thrown out of the G-8 after its incursions into Ukraine in 2014.

Simes is an interesting choice for the “American” host.  The Moscow-born son of two Soviet lawyers who represented dissidents, he emigrated to the US in 1973. 24 years old at the time, he said he was in search of intellectual and political freedom. He worked at a number of US think tanks including the Carnegie Endowment for International Peace and the Center for Strategic and International Studies after emigrating and becoming a United States citizen.

Through his work as an expert on Soviet policy, Simes met and befriended President Richard Nixon and his Secretary of State Henry Kissinger, accompanying them on trips around the Soviet Union and becoming a trusted advisor. Simes later headed the ex-president’s think tank, the Nixon Center, which changed its name in 2011 to the Center for the National Interest. Later, Simes developed ties to other Republicans, including former President Donald Trump. Special Counsel Robert Mueller’s report on Russian interference in the 2016 election discusses Simes and his research center, asserting that Simes was an important go-between linking the Trump campaign and Russians.

Although no one from the First Channel has discussed the choice of hosts for The Great Game publicly, it seems logical that the producers chose Simes because of his Russian roots, to present an American who would be sympathetic to First Channel viewers.

Simes’ connection to Trump could not have hurt. Simes has echoed Trump’s politics in some of what he has argued in The Great Game, even referring to Trump’s predecessor by the name favored by many conservatives, “Barack Hussein Obama” Similarly, Simes asserted there was no evidence of collusion between Russia and the Trump campaign. The show would likely play very differently had the American host been someone without Russian heritage or without sympathies towards Trump.

Interestingly, all episodes of The Great Game through June 2021 were translated into English and posted on Channel One’s own website and YouTube.  I cannot remember a show ever being translated into English like this in the 30-plus years I have been in and out of Russia. This also would seem to underline the credibility of the show as a symbol of international dialogue on Russian-American relations.

The Great Game is definitely aimed at supporting the Putin administration’s core foreign policy concepts. These include promoting the Russian state, denying Russia responsibility for international aggression like the invasion of Crimea, and hyperbolic focus on the West’s economic and political issues. While the United States was portrayed in the show’s early years as a troubled country, The Great Game was far less critical of President Trump than it was of his predecessors or European leaders.

But I’ve been watching the show lately, and its tone has changed considerably since Trump left office. The Great Game today resembles the coverage of the US on the Russian propaganda network RT.  Recent episodes suggest that under President Joseph R. Biden, America is in chaos. The Great Game would have one believing that US store shelves are almost empty due to supply chain disruptions, that Covid-19 is out of control, that ethnic and sexual minorities are rioting in the streets daily, and that civil war is soon to break out over political polarization. The show’s content seems to have somersaulted along with Putin’s feelings toward the American leader.

Contrary to its name, The Great Game has not had great ratings, and was cut back from several times per week when it first aired to just once.  Perhaps its relatively polite debate helps build a veneer of respectability for Russian television.

Although polls suggest most Russians still get their news from television, their trust in it has been plummeting. Moreover, generational change and the presence of the Internet are challenging the informational dominance of Russian television more and more every year. Young Russians are increasingly getting news from social media and are not very interested in television as a news source.

My own conversations with my middle-class, middle-aged friends in Moscow suggests that they too are watching state-run channels with a healthy dose of skepticism, and are growing weary of the kind of one-sided political information presented on state-owned television. Their frustrations have boiled over during the past few months, following Russia’s slow response to the Covid-19 pandemic in early 2020 and its quick action to imprison opposition figure Alexey Navalny upon his return to Moscow in January 2021.

Russian television’s waning influence is a long-term issue, and in the short term, there is no reason to believe that the informational-analytical genre will disappear—although continued experimentation and evolution as with The Great Game seems likely. These shows are so easy to produce compared with many other kinds of programs, so popular, and so responsive to Kremlin requests that they are likely to continue to be a key part of the Putin administration’s arsenal for some time to come.  But given its low ratings, it’s unclear how long The Great Game and its “American” view of foreign policy can remain a viable part of the Kremlin’s television playbook.