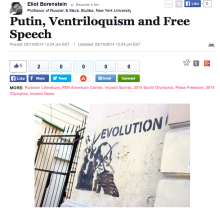 It would be easy to look at the series of repressive measures adopted by the Russian legislature — restrictions on Internet and television content, laws against blasphemy, redefining non-governmental organizations as “foreign agents”, banning so-called “gay propaganda” — as a return to the bad old days of Stalinism. That’s a simple story to tell, but it’s neither accurate nor helpful.

Read the rest over at Huffington Post or Pen/America.