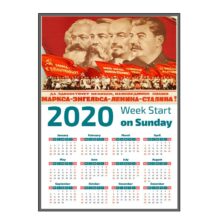 On the Post-Soviet Uncanny

Why Is today yesterday and not tomorrow?

–Rabfak, “Our Nuthouse Is Voting for Putin”

This post is part of the Introduction to Unstuck in Time: On the Post-Soviet Uncanny, an ongoing summer feature on All the Russias.  It can also be found on Eliot Borenstein’s website.

On or about December 1991, the normal course of time in Russia stopped.  Or to put it more precisely, the normal course of time in the Soviet Union ended along with the country itself, leaving Russia and the other fourteen successor states to reset their clocks for a new era.  Not literally, of course, although the Russian state would occasionally tinker with the metaphorical timepieces established by the USSR.

Among the many aspects of the Soviet Union inherited by the Russian Federation was a voluntarist approach to time. In 1930, all clocks in the Soviet Union were moved ahead one hour, a phenomenon known as “decree time.” Though the change was motivated by practicality, what could be more symbolic of the USSR’s status as the harbinger of the future?  It was rolled back in the Russian Federation in the mid-1980s, only to be restored just one month after the December accords that wiped the Soviet Union from the face of the earth.  The Soviet Union also had daylight saving time, which was made permanent in Russia in 2011 (i,e, the country sprang forward without falling back), and then abolished in 2014 (falling back, never to spring forward again).

From an outsider’s perspective, time in the USSR was never straightforward. Even setting aside the five-year plans (and the calls to fulfill them in four), or the early Soviet emphasis on speed (Valentin Kataev’s Time Forward starts with “Chapter 1: The first chapter is omitted for the time being”), experiments with the everyday experience of time were a recurring feature of Soviet life.  In 1929, the USSR instituted the “nepreryvka,” the endless working week with no set days off for the weekend (workers were assigned to different shifts with different days of rest).  An unsurprising failure, the practice was revised into a six-day week in 1931, and the country reverted to a five-day week in 1940.  Another innovation, working a 24-hour shift every three days, has remained a fixture of many Russians’ schedules.

In some areas, the centrality of Moscow led to a time frame that completely ignored conditions on the ground. Until 2018, all train schedules in the Russian Federation (and, previously, in the Soviet Union) indicated arrival and departure in Moscow time. Never mind that the country has eleven time zones.  On vacation in Lithuania in 1992, I realized that I could not be sure what time my return train was actually scheduled to depart:  the ticketing seemed exactly the same as the old tickets, but Vilnius and Moscow were now in different time zones (for the time being, it turned out that Moscow time still reigned).  In preparation to fly back to Moscow from Tomsk in 1993, I was surprised to find that, the moment I passed security and entered into the waiting are for my flight, I was now on Moscow time (the clocks were 4 hours behind the ones on the other side of the gate).

Other aspects of the Soviet, and now Russian, calendar, are also inflexible.  The official first day of school is September 1, even if that date falls on a Saturday or a Sunday–the exact opposite of the often confounding American custom of scheduling holidays by day of the week rather than date (such as Thanksgiving, which always falls on the third Thursday of the month).[1]

Post-Soviet Russia would have its share of calendrical decisions to make, beyond the aforementioned reforms of decree time and daylight savings. Holidays would be renamed: “Soviet Army and Navy Day” became “Defender of the Fatherland Day” and “International Workers’ Day” became “The Day of Spring and Labor”.  The Russian Federation made June 12, the date that the Russian Parliament declared sovereignty in 1991, a national holiday in 1992 (initially “Day of the Adoption of Sovereignty of the Russian Federation,” it became “Russia Day” in 2002).  In 2005, the country adopted November 4 as “Unity Day,” an old Imperial holiday commemorating the 1612 expulsion of Polish invaders.  Clearly meant to displace the Soviet holiday of October Revolution Day (November 7), it has an additional significance to which we will return shortly.

The real disruption to the normal flow of time, however, was less about formal measurements and work schedules than it was about the country’s relationship to its past, its understanding of the present, and the ability to imagine a future.

Russia had come unstuck in time.

[1] This difference between American and Soviet/Russian approaches to time was noted by Stephen Hanson in Time and Revolution: Marxism and the Design of Soviet Institutions (University of North Carolina Press, 1997), a book that has been invaluable as background research for this project. For more on the standardization of time in the modern West, see Vanessa Ogle’s The Global Transformation of Time: 1870-1950 (Harvard, 2015).