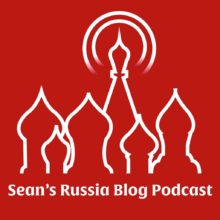 I recently had the good fortune of corresponding with Sean Guillory, host of the SRB Podcast and Digital Scholarship Curator in the Center for Russian, East European, and Eurasian Studies at the University of Pittsburgh. Below is Part I of our virtual conversation; Part II will follow on 3/27.

Can you talk a little bit about how Sean’s Russia Blog, and the podcast, came to be, and how you ended up as their fearless leader?

I started Sean’s Russia Blog in 2005 when I went to Moscow to do dissertation research. The original idea was to keep family and friends updated on my experiences in Russia. But I quickly realized that I don’t really like writing about my personal life. So, my interest quickly turned to what I was reading in the Russian press and commenting on Russian politics.

This was inevitable in retrospect. I had been participating in independent publishing prior to the blog. I was involved in zines throughout the 1990s and early 2000s. I published a couple of zines and even ran a zine mail-order for a few years.

The blog pretty much took off from there. There were only a few Russia-related English-language blogs at the time—Scraps of Moscow, the Accidental Russophile, Siberian Light, La Russophobe, and a few others that I can’t recall. They are all defunct now, unfortunately. I’m still around, though.

The blog/podcast continues to be a one-person operation. I toyed over the years with including more writers but out of laziness or lack of time, I never really developed it. Now as I write this, I don’t think “fearless” is the right word, even if it’s tongue-in-cheek. I’m more of a poor leader that has a lot of good intentions and even a few good ideas but never really develop most of them.

The podcast started in 2015. In many ways, Marshal Poe is responsible for me getting into podcasting. In 2010, Marshal asked if I would like to run the Russia and Eurasia channel on his New Books Network. I’ve always had an interest in radio, and even did a few radio programs at KPFK in Los Angeles. I did the New Books thing for a while, perhaps a year or so, but then stopped doing it—quite suddenly and unceremoniously. Nevertheless, the podcast idea still stuck in my head, and after being a regular guest on Brian Whitmore’s Power Vertical podcast, I decided to revisit the idea in 2015. Brian’s podcast was the really the only consistent Russia-related show out there, and I felt that it only covered a small sliver of what was possible. This became even more apparent after 2014 when the rhetoric around the region became even more polarized. Also, by that time, I had left academia after striking out on getting a tenure track job and was looking for a way to still be engaged with Russia. So after a year of bumping around and getting over the severe depression and identity crisis that came with leaving academia, I decided to give the podcast a serious go.  I was also incredibly fortunate to have a family that allowed for me to do it. My wife, Maya Haber, was making enough for there to be little financial pressure and gave me the space and support to do the podcast and develop it.

How have things changed since 2005, when you started the blog — and specifically, how have cultural and discursive changes in either Russia or the US affected your selection of content or the issues you’ve chosen to address in your own contributions to SRB?

Things have certainly changed a lot since 2005, especially concerning the rhetoric around Russia and the United States. The public rhetoric is sharper, more divided and politicized. In many respects, a critical yet sober analysis of Russia has become rare, or worse —marginalized. Academia has so far been immune to this, thankfully. There are still a few experts engaging in the public conversation about Russia out there, and they make valuable contributions.

Still, it’s interesting to see how certain stars have risen thanks to taking positions that closely align with the American foreign policy establishment and NATO. It’s also interesting to see other stars plateau or fall as they diverge from that general line. Unfortunately, the diverse field of Russian commentary on blogs and in the press that existed ten years ago has since 2014, and especially since 2016, given way to a number of entrepreneurs and opportunists. The entry of so many hangers-on has in many respects made the public atmosphere around Russia quite poisonous.

Friends often ask me if I’ve benefited from Russia constantly being in the news. I certainly have in many respects. But I also can’t wait until the news moves on—probably after Trump is gone—and the periodic spikes in attention about Russia begin to smooth out. While I enjoy the fact there is more interest in Russia, I can’t help but be disappointed that this opportunity to bring more knowledge about the place has actually resulted in more public ignorance, not less.

When I started blogging in 2005, the Internet offered a lot of opportunity for people like myself to express their views on Russia. I’m not formally trained in political science, but in history. Nor do I have all the connections of think tanks, policy makers, security services, etc that provide space to express my ideas. Blogging allowed me to do this, and over time it turned into opportunities to write for larger audiences.

Social media has also allowed for important ways for people like me to promote themselves. But I must say that I see very little positive in social media nowadays beyond that. It’s become a totally toxic environment full of denunciation. This, of course, is a reaction to Ukraine, Russia’s military intervention in the Donbas, its annexation of Crimea, interference in the 2016 US Presidential election, and Trump and “Russiagate.”

In many respects, social media has intensified the polarization, which has in turn infected commentary as such. It has effectively narrowed the field of acceptable discourse. I think that a serious conversation needs to be had in Russian Studies around the negative impact social media has had on the public discourse about Russia. And here I don’t mean about what people morally or even politically think about Russia’s geopolitical involvement, motivations, and actions, but about the basic understanding of the country and its history, and how the various tropes that inform that understanding are distortions exacerbated by the discourse on social media.

How has this influenced my content? On the one hand, it’s caused me to retreat from the public debate. The topics and terms of the debates around Russia are increasingly uninteresting. The same issues are rehashed over and over. Most analysis is rather stale. This has only become worse with all these entrepreneurs and opportunists entering the game. I also must admit that it’s also resulted in self-censorship on my part. I often refrain from commenting just because I don’t want the shit that comes with it. I don’t have time to address it and I find most of the criticism I or, nowadays, mostly others get, rather inane and silly. Often it has nothing to do with constructive criticism or advancing understanding about Russia. More often it has to do with scoring “hot take” points to generate more followers, retweets, shares and clicks.

On the other hand, the sorry state of public discourse around Russia has led me to try to provide the most eclectic range of topics on the podcast. The idea is to show my audience and guests three things: 1) That there is a lot of wonderful scholarly work out there. This is really the golden age of Eurasian studies; 2) That there is an audience for scholarly work and the problem is one of access. It’s a damn shame that scholars spend so many years researching and writing these studies only so no one reads them. I say all the time that people may not read a book on, say, Kazakh nomads. But they might listen to a 45-minute discussion about it. 3) That this scholarship is more needed than ever and scholars should do their best to reach beyond the university, their colleagues and students. Sure, we may never have an impact like all the flapping heads on the Punditburo, but at least we might get people to realize there are more stories out there than need telling.