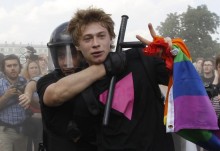 When our undergraduates come back in the fall and start talking about their plans to study abroad, we in Russian Studies have to ask ourselves a question:  what do we say to our LGBT students who are thinking about studying in the Russian Federation?

For many of us, this is not an abstract question. I have the good fortune of teaching at New York University, just a ten-minute walk from the site of the Stonewall Uprising that started the modern gay rights movement.  I’ve never seen any actual statistics about the LGBT population at NYU, but it is safe to say that this is a place where many students are quite comfortable being out with their classmates and instructors. And, if we’re lucky, some of them may want to study Russian.

The anti-gay laws recently passed by the Russian legislature are only part of the concern.  After all, the Soviet Union had laws that imprisoned men for homosexual activity, but gay and lesbian foreign exchange students could reasonably spend a semester in the USSR without fear of being shipped off to a prison camp.  In part, this was the happy byproduct of widespread cultural naiveté–the USSR never perfected gaydar technology. That is, it was understood that homosexuals and lesbians existed, but only as such rare, abject freaks that the designation couldn’t possible apply to an actual person you might know.  The result was a queer invisibility whose uses are certainly familiar in the West (“If only that nice Liberace could meet the right girl…”)

In the 1990s,  when gay students and friends would ask me about the safety of traveling and studying in Russia, my answer was basically this: Yes, the prevailing attitude is quite homophobic, but 1) LGBT are still largely invisible to the average person, and 2) even if people will say horrible things about LGBT people, you’re unlikely to be beaten up simply for your sexual identity.  Whether or not I was right then, I certainly wouldn’t be right if I said that now.  In fact, I’d be grossly irresponsible.

Again, teaching at my university brings an added layer of irony.  NYU has a campus in Abu Dhabi, and one of the many contentious issues that has come up in the NYU community here in the States is the status and rights of our LGBT students and faculty.  But I have greater faith in the safety of our LGBT students in the UAE than I do in the Russian Federation.  Partly because Abu Dhabi, like certain other countries in the Arab world at various times, has inadvertently given LGBT people the benefit of “don’t ask, don’t tell” even while trying to legislate them out of existence.  Pride parades are out of the question, but it is entirely possible to live by flying under the gaydar.

To a Western liberal, this may well seem morally objectionable.   But there is an argument to the effect that the Western liberal emphasis on the right to a public affirmation of identity is a secularization of a Protestant insistence on the total coherence between the public and private self.  It’s an argument that isn’t persuasive politically, even if it has some purchase anthropologically.   But it’s no longer an argument that could be relevant to Russia.

In recent years, Russia has become  a less comfortable place to send students who are identifiably “different.”  I’ve heard unpleasant stories from Asian Americans, while one of our most promising black students, after being treated like a circus freak for four months, has vowed she will never go back.  Even I’ve had some difficult moments, and that’s for being just “swarthy” enough to be mistaken for a Chechen by the local police.

Gays and lesbians have never found widespread acceptance in post-Soviet Russia.  The current laws against “gay propaganda” are a perfect fit with the casual disdain for “sexual minorities” in popular culture. In the popular fiction of the 1990s, one could find frequent references to entertainers who claimed to be gay or lesbian just to “follow fashion” or “get attention” (T.A.T.U. has a lot to answer for). in other words, the media “turned” people gay.  Even liberal writer Boris Akunin, whose novel Coronation can be read as sympathetic to homosexual men, resorts to crass caricature when setting his fiction in contemporary times: Nicholas Fandorin’s secretary Valya is a flamboyant gay male transvestite who is always playfully hitting on his boss, before eventually becoming an MTF transsexual, apparently on a whim (feeble comedy and misinformation all in one!).

In the few months since anti-gay legislation has been adopted, we’ve seen a significant rise in ant-LGBT violence and intimidation, from the spate of videos showing gay teens harassed and forced to drink their own urine to beatings and murder.  The new laws do not call for violence, but they serve as a dog whistle to chauvinist, homophobic forces:  it’s open season on gays.  The government did not mastermind these attacks, but responsibility still lies with the Duma and Kremlin.

So what do we tell our students?  First, we can acknowledge living in glass houses (Mark Carson’s murder by a homophobic gunman stunned Greenwich Village this summer).  Second, it’s worth recalling that shocking crimes play havoc with our understanding of probability: we don’t warn our students not to fly because of a plane crash, and perhaps we don’t warn our students away from a country because of a murder.  But we should make sure our students have as much information as possible, and let them know that visibility can bring vulnerability (especially to gay men, who are the primary target of a campaign that is so clearly connected to anxieties about “manliness”). We cannot make decisions for our students, but if the profession does not address the issue publicly and carefully, then we have failed in our responsibility.