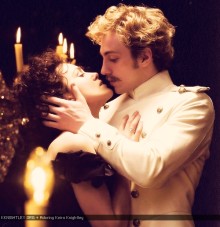 Reason #137 to study Russian literature: apparently, it will teach children about sex.  This is a good thing, because no one else in Russia seems to want to.

Russian literature as a sex education tool is the latest brainchild of Pavel Astakhov, Russia’s ombudsman for children  Westerners know him as the prime mover behind the recent ban on American adoptions in Russia; Russians probably know more about him than they ever would have wanted to (his allegedly plagiarized dissertation, his 30-million-ruble income (as of 2011), and his constant showboating before television cameras).

Sex itself was never one of Astakhov’s particular hobbyhorses, but he has clearly been feeling outclassed by his colleague Elena Mizulina, the Duma representative who claims to have discovered a “pedophile lobby” supporting Wikipedia, and may or may not have spoken out against oral sex.

So now he has taken a firm stand against sex education, the latest in a series of threats facing the children of Russia. It’s a good thing someone is looking out for the younger generation: if you add up all the dangers invoked in the last year (predatory American would-be adoptive parents, gay propaganda, pedophiles, the Internet, and naughty television programs), it’s amazing anyone survives to adulthood.

Russia is not without its own traditions of sex education.  Soviet-era advice manuals recommended that teens troubled by sexual urges take cold showers, play lots of sports, and avoid spicy foods.  Astakhov’s recipe is even simpler: read the classics: “The best sex education that exists is Russian literature.  In fact, literature in general.  Schools should raise children chastely and with an understanding of family values.”

So once again, we scholars of Russian literature must come to the rescue.  Exhausted though we may be by our work developing a reading list for Edward Snowden, we cannot shirk our obligations to Russia’s youth.  Russian literature is rich in classics, and it would be unreasonable to expect high school students to read the entire canon, while paying for plagiarized papers on ever single Russian masterpiece wis beyond the average teenager’s budget. Astakhov’s statement is a call to arms, or at least, a call for papers.  The wisdom of the classics must be distilled into a more manageable form.

While there is no time for us to write an actual sex advice manual (“Everything You Wanted to Know about Sex, to Which Russian Literature Elliptically Alludes”), I have gotten started on the  index for this hypothetical volume.  We begin with the nineteenth century:

adulterous women: as ordinary, unhappy people (Chekhov, “The Lady with the Dog”); see also, “Railway fatalities in the works of Tolstoy”

female sexual response, and how to avoid it:  see nineteenth century, passim

foreplay: see some other literature

marriage: as happy ending (Tolstoy, War and Peace); as hell on earth (Tolstoy, The Kreutzer Sonata)

women: are they even human? (Dostoevsky, Crime and Punishment); as dangerous hags (early works of Gogol); as delicate, disappearing egg-shaped beings (Gogol, Dead Souls); as traps for men (Tolstoy, The Kreutzer Sonata);

By comparison, the twentieth century is a treasure trove of enlightened information.  Adultery is a non-issue in The Master and Margarita, while Andrei Platonov’s The Foundation Pit contains something of a zen koan: If a legless war veteran fondles himself while watching a parade of Komsomol girls, is their honor insulted?

Western sex educators might be appalled by the lessons Russian children will learn, but this is really all part of the plan.  Russian literature as sex education is crucial  element in the struggle with Russia’s demographic decline.  If children get all their information about sex from Russian literature, we can expect many blessed events in the years to come.

For Astakhov, this is clearly a good thing.  After all, those orphanages won’t just restock themselves.