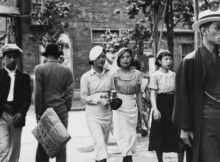 Above: A street scene from 1930s Tokyo. Source

Logics and worldviews that “justify” wars of aggression

The Russian invasion of Ukraine is an anomaly for the twenty-first century both in its purpose of forcibly expanding territory, and in its crude brutality. However, it has analogies in the history of the twentieth century and earlier. For example, it is strikingly similar to the Japanese Empire’s invasion of Asia, especially China, in the 1930s and early 1940s. They are not only similar on the surface in that both were undeclared wars; involved the massacre of civilians; and imposed unnecessary sacrifices on their own soldiers due to poor tactics, but also in the logics, discourses, and worldviews that served to “justify” war in the first place. This post describes the similarities between late imperial Japanese invasions and considers their origins, as well as the implications they suggest for Russia’s current war against Ukraine and the future international order.

The parallels between the two scenarios can be divided into two main categories. First, the aggressors act entitled to punish the victims of their aggression even as they claim historical unity with them. In the 1930s, Japan described its relationship with China as “same script, same race,” and “neighbors across the strip of water,” but, as the Chinese anti-Japanese movement gained strength, expanded military aggression under the slogan of “punishing atrocious China.” Putin, while claiming that Russians and Ukrainians are one people, accuses Ukraine of becoming an “anti-Russia” and advocates the overthrow of the “neo-Nazi” Ukrainian regime that allegedly commits “genocide” in the Donbas.

Second, the aggressors in both the historical Japanese and current Russian case situate their actions not only within the bilateral relationship, but also inside the current world order, justifying their aggression by appealing to their respective “national missions.” Japan criticized British and American racism and their influence on China and other countries, and advocated the liberation of Asia. Putin has criticized American and European interventions in various parts of the world and has framed Ukraine as their pawn. He has also stated that the world order centered on the “corrupt West” is coming to an end, and that Russia will create a multipolar world together with China.

Another related point in common is that the aggressors elaborate the meaning of their aggression for the world order retroactively after the start of the invasion. In November 1938, more than a year after the outbreak of the Sino-Japanese War, Japan promoted the construction of a “new order in East Asia.” In the summer of 1940, Japan proposed the concept of the “greater East Asia co-prosperity sphere.” This sphere was to include Southeast and South Asia, which were thereby to be liberated from Western colonial rule. The underlying motivation, meanwhile, was to secure these regions as Japan’s sphere of influence in anticipation of a German victory in the war in Europe.

In a speech from September 2022, more than half a year after he began the invasion of Ukraine, Putin  similarly argued that Russia was fighting Western colonialism. This claim is opportunistic, reflecting Putin’s hope that non-Western nations dissatisfied with Western-centrism will rally to Russia’s side. Both Imperial Japan and Putin’s Russia play(ed) on anti-Western and anti-colonialist narratives to cover up their own imperialism.

A sense of alienation among semi-peripheral powers

Why are the claims and actions of Japan in the 1930s and Russia today so similar, despite vast differences between eras, cultural backgrounds, and underlying economic structures? What they have in common is that they are/were semi-peripheral “great powers” nursing a historical sense of alienation. The Japanese Empire grew rapidly, pursuing modernization and Westernization, but still could not catch up with the West and was not recognized as its part. Russia, the largest country in the world, is the successor to the superpower Soviet Union and takes pride in being a military power, but it is second-rate in terms of economy and technology. Ideas of being part of the West, on the one hand, and being a peculiar Slavic nation, on the other, have been sites of cultural conflict since the nineteenth century. Russia tried to participate in the construction of a common European home in the late Soviet and immediately post-Soviet periods, but after this attempt failed, anti-Western sentiment grew.

The sense of alienation is linked to a victim mentality, with Russia fearing being neglected or made the object of “containment” in international politics. Japan’s frustration had accumulated because of the Triple Intervention by France, Germany, and Russia in 1895, the rejection of Japan’s proposal for the abolition of racial discrimination at the Paris Peace Conference, and the various ways in which the West put the brakes on Japan’s expansion into China. Russia interprets the containment of the Russian Empire’s advance into the Balkans in the nineteenth century and the Soviet Union’s global expansion in the twentieth as a malicious act by the West, which the Russian government perceives as wishing to effect Russia’s collapse even today.

Even as they nurtured inferiority complexes toward the West, Imperial Japan and Russia cultivated disdain for their neighbors. Japan insisted that Asian countries and peoples could develop only under Japanese leadership. Putin likewise asserts that Ukraine is a country “created by the Soviet Union” and that its sovereignty is possible only in partnership with Russia.

With sufficient economic and diplomatic resources, Imperial Japan and Russia could have expanded their influence as “informal empires,” but instead developed a tendency toward territorial expansion and the creation of vassals. Japan pursued its “special interests” in Manchuria, its “lifeline,” and tried to fashion what it called “greater East Asia” into its Lebensraum. Russia claims Ukraine and its surrounding areas as its sphere of influence and claims special rights there. Japan in the 1930s, like present-day Russia, considered itself a mistreated great power unwillingly occupying a semi-peripheral position in the global hierarchy. Again like its present-day counterpart, Japan vented its frustration with unfulfilled expectations on surrounding countries it regarded as inferior.

Lessons for the international community

Of course, there are many differences between Japan in the 1930s and early 1940s and Russia today. Japan was then in the process of development and population growth, and its expansion to China was economically motivated. The Japanese people, including industrialists and scientists, were energetic, and although they suffered greatly from the misguided war, they gained experience in organizing themselves through active cooperation with the wartime regime, which they were able to apply to Japan’s rapid reconstruction and development after the Second World War.

By contrast, today’s Russia is a country with little opportunity for economic development and a stagnant population, while the economic benefits to be gained from invading Ukraine are absent or insignificant. Most Russians, though not actively opposed to the war, are not enthusiastically supportive either. A significant number of outstanding scholars, writers, engineers, and highly educated young people have fled the country, undermining the human resources that Russia will need after the war. The new émigrés,  if not their compatriots, have fully realized that there is no reason to sacrifice their lives and future to satisfy the perverse ambitions of their leaders.

The war Putin is waging against Ukraine will have a long shadow no matter what happens from this point forward. If Russia lost the war and Putin fell from power, one possible strategy for its future development would be to make a fresh start as a pacifist nation, discarding any “great-power” ideals. However, given the widespread apathy the Putin regime has cultivated among Russians for over two decades, and taking into account that no foreign country is likely to invest in creating a large-scale mechanism to direct Russia’s rebirth as a democratic nation, Russia will face much greater difficulties with reconstruction than Japan after the Second World War.

While the behavior of Putin’s Russia is idiosyncratic for today’s world, we cannot exclude the possibility that other marginalized states may take aggressive actions based on their frustration. China, in anticipation of becoming the world’s most powerful economy, is challenging the Western-centered world order, but has no powerful close allies and remains semi-peripheral on the world stage. The resulting sense of thwarted national ambition may lead to unexpected actions. A similar problem could arise with India. To prevent such a situation, the international community must unite and help ensure the failure of Russia’s war in Ukraine, thereby demonstrating the futility of armed invasion in the twenty-first century. At the same time, we need to understand that the hierarchical structure of the world order is problematic in itself, generating discontent among various countries. It is necessary to break away from Western-centrism, precluding those consigned to the “periphery” from using anti-Western discontent as a pretext for aggression.