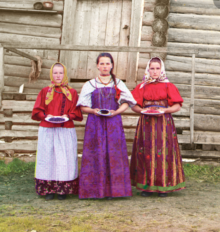 Jennifer Flaherty received her PhD in Slavic Languages and Literatures from U.C. Berkeley and her MA from the University of Chicago. She is currently a postdoctoral research fellow at the Jordan Center for the Advanced Study of Russia at NYU. Her book project examines stylistic innovations in nineteenth-century Russian literature as expressions of the tensions of modernity within its agrarian myth.

Whatever modern experience is, it can hardly be explained without appealing to what it is not — ancient, simpler and probably better, depending on who you ask. But then again, the advantages of living in a peasant Gemeinschaft, connected to nature and with transparent traditions, are offset by the disadvantages of an utterly dependent and mercilessly determined existence. Modern life, with its potential for independence and indeterminacy, lies in the negative space of these disadvantages.

Considering the life of nineteenth-century Russian peasants, for instance, reminds us why we suffer under modern demands and divisions — why we work without respite for a future that will never be good enough, and why we endure the lonely existence that often attends total independence. We’ll never go back.

Such is the thought process that underpins nineteenth-century European culture, including Russia, where peasants — a juridically defined social estate — made up close to 90 percent of the population. These ideas were also familiar in Germany, where philosophical critique of modernity shaped much of the literary and intellectual field in nineteenth-century Russia. Friedrich Schiller helped begin a long tradition — one extending all the way through Karl Marx — of criticizing modern life by imagining a people for whom its problems did not yet exist. First it was Ancient Greece, then it was a future society that looked a lot like this same ideal. Along the way, the project was to maintain the self-determination modernity offered while avoiding associated pitfalls like exploitation, alienation, poverty, colonization, slavery. In Russia, the hope of achieving a seemingly impossible combination was attached to the still-existing, and thus slightly more problematic, social reality of the peasantry.

The ideal existence, it seemed, was a peasant-like life with no serfdom, less work, and plenty of time to read.

In France, too, thinkers like Rousseau formulated their conceptions of individual freedom within the framework of modern social-political structures even as they critiqued their repercussions. Building on this critique, Romantic nationalists began to find more value in the past than the present, brutally determinate conditions and all.

Showing the other side of the coin, Eugene Weber’s still-classic Peasants into Frenchmen: The Modernization of Rural France, 1870-1914 (1976) documents the outrageously critical epithets leveled against rural-dwelling land-laborers in nineteenth-century France. These were epithets with which Russian writers could well compete, and which Marx and Engels neatly summarized as “the idiocy of rural life.” While novelists like George Sand followed Rousseau’s lead and romanticized peasants as noble savages, others were content to understand them simply as savages. The removal of the adjective “noble” from the noun “savage” would seem to make all the difference in how a person felt about a mass population that was somehow not “with the times.” But the removal and attachment, attachment and removal, of such an adjective suggests a fluidity in the imagination of the peasantry among Russian writers, who often wavered between embracing and rejecting modernity.

It goes without saying that notions of the peasantry are just that, notions, that draw a circle around a group of real people with a complex culture. On the pages of philosophical and literary texts, peasants transcend the modern present so as to define and oppose it. Authors render them as isolated from their surroundings, even as they supplied contemporary wars with their bodies and contemporary economies with their work. As rural dwellers, peasants were linked to urban centers by a thousand threads and, largely powerless, reflected a continuum of subordination as much as its absolute bottom.

To ask about modernity is to ask what it is not, and anyone looking for stable definitions is sure to be disappointed. The instability of definition is, however, what attracts us to literature, especially if we are willing to recognize our responsibility in defining a reality inevitably colored by our whims and wishes. This is not to fetishize openness, which arguably contains the restless movement of thought as much as definitions do. Rather, recognizing the instability of a cultural concept like the modern means recognizing how writers give form to modern experience — in self-isolating protagonists, for example — and from there recognizing that modern experience is itself a collection of forms that undergoes constant addition and revision.

In nineteenth-century Russian literature, the ever-shifting forms of modernity are nevertheless consistent on one point: modern experience involves the peasantry, however one relates to it.

What interests me about Russia’s modernity is not only the usual question of “backwardness”: was Russia really going through the same things as, say, England? The easy answer is: of course not. But the deeper answer to the deeper question is, yes, Russia experienced a wave of changes whose repercussions the nation and the globe continue to feel today. This statement holds despite the oft-repeated adage that Russia was largely agrarian long after France’s peasants had already become paradigmatic Frenchmen.

One may doubt, though, that any European nation had created a perfectly “free” citizen, and one may also recall that questioning modern principles is one of the most modern things a subject can do. The critical thinker inevitably questions the viability of her own critical reason, and Tolstoy in his peasant shirt is, as some scholars argue, Russia’s first truly modern man. To add to the confusion, social changes have involved at least as much violence as the feudal knout, from factory labor to slavery. For these reasons, some historians aver that all modernities are “backward.”

My interest, though, is in the unique centrality of the peasantry to Russia’s idea of modernity as formulated in literature. Writers thought through modern problems of individual freedom, social inequity, political involvement, and scientific truth by writing on peasant themes, their subject matter often compelling entirely new literary forms. Russian writers wrote about peasants to develop a whole new way of writing that ironically required peasants to move to the margins of modern literature.

This way of writing is called “realism,” and it should come as no surprise to readers of the major cultural theorists of modernity that nineteenth-century literary forms articulated tensions of modern living and, conversely, that these tensions motivated new literary forms. What we must still understand is precisely what sort of modernity Russian writers were generating and conceptualizing with the peasantry at realism’s empty center.

The leading light of Russian realism in its first mature phase, Ivan Turgenev, debuted in literature with a work centered on the peasant theme for the first and last time. Lev Tolstoy’s first novelistic project was about the life of a landowner among his serfs. Tolstoy would not finish his landowner’s novel, but he would help establish the Russian novel as we know it. Fyodor Dostoevsky returned from prison and began his miraculous years of productivity with a fictional memoir of his time among peasant prisoners. Why were peasants a starting- and a limit-point for nearly all of the major literary innovations of nineteenth-century Russian literature, including the narrative poetry of Nikolai Nekrasov and the ethnographic short forms of Gleb Uspensky? The answer is at least as dynamic as the modern experience that underlies Russian realism’s peasant theme. Writers tried, failed, and kept trying to resolve the problems of modernity on its own terms: to be free without being lonely, to be peasants and their master-saviors, too.