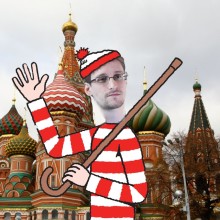 I’ve been on a bit of a holiday from All the Russias, taking my customary, relaxing summer vacation (i.e., teaching four classes), and doing my best not to let the news from the (ex-) Mother-in-Law-Land keep me from my appointed rounds.

And then some fool had to give Edward Snowden a copy of Crime and Punishment.

This is tantamount to a declaration of a Russian Literature Emergency, something Slavists spend their entire lives waiting for.  We are overeducated Maytag Repairmen, always on the alert for a call that never comes.

To the uninitiated, giving Edward Snowden Crime and Punishment makes perfect sense.  After all, he has been accused of a crime, and he’s hiding out it in Russia. Indeed, it might seem a bit too “on the nose.”  But actually, it misses that nose by a mile. (More on noses later).

Handing Snowden a copy of Dostoevsky’s classic novel is appropriate only in the same way as welcoming someone to Australia with a DVD of Crocodile Dundee:  it is an example of purely associative logic.  The only real connections are “Russia” and “crime.”

In the novel, Raskolnikov commits a crime, for which he ultimately ends up repenting.  At issue is not the nature of the crime, but the nature of the criminal:  murder itself is, for Raskolnikov, a crime by definition, but he is testing the theory that it might not be a crime if committed by a superior being.   Dostoevsky leads us to the conclusion that Raskolnikov has made two mistakes here, first in the proposition that a “superman” should be allowed to get away with murder, and second in his belief that he himself is that superman.  But he would only have to be wrong about one of these things for his act to be a crime.

[God also plays a double role here, first by establishing the moral framework that renders Raskolnikov’s action an unequivocal sin, and second by trying to ruin the novel in the book’s second epilogue.  As yet, there is no equivalent with Snowden.]

Snowden’s situation is entirely different from Raskolnikov’s.  He has broken the law, and the question at hand is not whether the law can be broken only by someone like Edward Snowden, but rather whether the law should be broken by anyone who has access.  The argument in Snowden’s favor is that he violated the law to expose the crimes of the U.S. government, and therefore he was justified.

So Crime and Punishment, great novel that it is, proves irrelevant to the Snowden case.  But this does not mean that Russian literature can’t provide parallels and insights.  It is up to us, the experts, to come up with Edward Snowden’s Summer Reading List.  Here are some suggestions.

1) Nikolai Gogol’s “The Overcoat.”  Downtrodden copyist Akaky Akakievich’s “hemorrhoidal” complection may make him less photogenic than Snowden, and he certainly lacks Snowden’s way with words, but this story comes  a bit closer than Crime and Punishment in approximating Snowden’s plight.  Once Akaky Akakievich (spoiler alert!) loses his overcoat, he spends the rest of the story seeking justice from a city and system that doesn’t know the meaning of the word.

2) Gogol again: “The Nose.” This delightfully absurd tale of a bureaucrat who wakes up one morning to find his nose missing may seem to be an unlikely fit.  But Kovalev’s desperate attempts to track down his wayward appendage may turn out to be more Foucauldian than Freudian:  the poor man looks a lot like a government trying desperately to track down its leaks.

3) Alexander Sukhovo-Kobylin‘s Krechinksy’s Wedding, The Case and The Death of Tarelkin.  Sukhovo-Kobylin is a household name precisely nowhere, yet his nineteenth-century trilogy of dramas has surprising resonance.  What begins as a somewhat farcical satire of aristocratic mores turns into a scathing critique of a bloated, lethal bureaucracy. In the final play, one of the characters fakes his own death to avoid persecution, and even has the pleasure of giving his own eulogy.

4) Dostoevsky again. But this time, his 1872 novel about revolution and conspiracy.  Demons (also translated as The Possessed,also translated as The Devils, adapted for the big screen as The Smurfs) takes place in a  provincial town where several of the more radical residents have been duped into believing they are part of a nationwide revolutionary movement, when actually they are acting alone.  Demons is a critique of revolutionary idealism, to be sure, but, like much of Dostoevsky, it becomes even more fascinating when considered in terms of information theory.  The entire plot is based on the deliberate withholding of accurate information along with the careful dissemination of lies.

5) Anna Starobinets.  The Living. In the distant future, everyone is linked through a complex social network called “Socio.”  Surveillance is either total or totally irrelevant, as nearly all human interaction takes place in Socio’s virtual worlds. Much more interesting and less derivative than it sounds.

6) Alexei Kalugin.  There (City of Rats).  Is the omnipresent Information System that allows the futurist City to function purely benevolent, or is it keeping the Citizens ignorant of the truth?  Extra credit to Snowden for this one, since it requires learning Russian.

6) Finally, Dmitry Glukhovskky’s Metro 2033. Part of the international videogame/fiction blockbuster franchise, Metro 2033 chronicles the lives of Muscovites living in the subway after the apocalypse.  The prose is awful, but the premise makes being stuck in Sheremetevo Airport look almost appealing.

The summer is already half-over, but it is safe to say that Snowden has a fair amount of time on his hands.  What other books should we assign him?