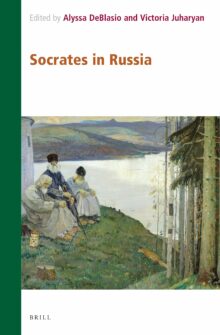 This is Part I of a three-part series on the edited volume Socrates in Russia, edited by Alyssa DeBlasio and Victoria Juharyan. Part II will appear tomorrow, 11/9, and Part III on Thursday, 11/10.

Through the end of 2022, Brill has made some chapters from Socrates in Russia available in Free Access.

Alyssa DeBlasio is Associate Professor of Russian and John B. Parsons Chair in the Liberal Arts and Sciences at Dickinson College.

Victoria Juharyan is Visiting Assistant Professor in the Russian Program at UC Davis.

The problem of Socrates—who he was, how his life has been interpreted, and what that life might represent—is “one of the eternal life-or-death problems of European culture,” as philosopher Vasily Sesemann wrote in 1925. By the time that, at age 70, Socrates was brought to trial and found guilty on the charge of impiety by the majority of 500 Athenian jurors, his disciples—ranging from about 25 (Antisthenes) to 45 years (Plato and Xenophon) his junior—had already begun telling his story. Half a century later, Socrates appeared as a character in so many dialogues that Aristotle identified them as their own literary genre. The story of Socrates has long been a vessel for interpretation. Philosophers, writers, and artists in Russia, Eastern Europe, and Soviet and post-Soviet space have actively participated in this process, creating their own Socrateses for their respective eras and environments.

Undoubtably, the best-known early example of an Eastern Slavic Socrates is the eighteenth-century philosopher, poet, and composer Hryhoriy Skovoroda (1722–1794). Called the “Ukrainian Socrates” and the “Russian Socrates,” as well as the “Diogenes of Kharkhiv,” “our own Pythagoras,” and “Xenophon”  in the centuries following his death, Skovoroda was educated at the Kyiv-Mohyla Academy, sang in the Russian court chapel choir in St. Petersburg, and later taught poetry and literature at the Kharkiv Collegium. After being expelled from his post for his approach to teaching ethics, Skovoroda spent the remainder of his life as a wandering philosopher, poet, and sage. Along with fables, songs, poems, and essays, he also left us over thirty philosophical dialogues. These dialogues are written in the Slobozhanshchyna dialect (relying on Church Slavonic, Old Ukrainian, Russian, and oral folk speech in both Ukrainian and Russian) and many feature a character bearing his own first name.

In a passage recorded as something he might have said to one of his disciplines—likely his friend, student, and first biographer, Mykhailo Kovalynsky—Skovoroda poses the question of his own self-conception as a Socrates under the guise of a prayer for God to send a Socrates “to the Russian [russkaia] land”:

In Rus’ there are many men who would be Platos, Aristotles, Zenos, Epicuruses; but they do not stop to think that the Academy, the Lyceum, and the Stoa developed from the thought of Socrates, as a chick grows from the yolk of an egg. So long as we do not have our own Socrates, we shall have no Plato or any other philosopher of our own. OUR FATHER WHO ART IN HEAVEN, wilt Thou send down a Socrates to us soon, one who will teach us first of all to know ourselves, so that, knowing ourselves, we may then develop out of ourselves a philosophy which will be our own, native and natural to our land?

Starting from Skovoroda’s idea, which merges both the philosophical image of Socrates and the literary act of his creation, the authors in this volume explore the figure of Socrates, both literally and figuratively, in Russian and Soviet intellectual history. Their work illuminates the various manifestations and transformations of the Socratic legacy and the genre of the Platonic dialogue, while also taking a critical look at how Socrates has been used for philosophical, literary, and political purposes.

For Alexander Herzen, Socrates served as a generative source for resolving the political contradictions springing up among the intelligentsia of his day. For Tolstoy, Skovoroda was one such Socratic figure who left us “wise teachings of how not to live and how to live such that we receive true well-being [blago].” Vasily Rozanov was Socratic in his tendency to post questions rather than answers, as well as in his claims to know “nothing save ta erotica.” Also involved in the creation of the “Russian Socrates” were Andrei Belyi, Aleksei Kozlov (known as the “St. Petersburg Socrates”), and Konstantin Sotonin, who was arrested in 1929 for “corrupting the youth” and whose unorthodox portrait of Socrates relies on Socratic dialogues not typically ascribed to Plato.

The authors in our volume also draw out Socratic subtexts in the work of Nikolai Nosov’s Neznaika series for Soviet children, Edvard Radzinsky’s censored play, The Appearance of Socrates Amongst His Athenian Persecutors, and Mikhail Bulgakov’s Master and Margarita, where the gospel scenes present a transplantation of several motifs from Plato’s Euthyphro, Apology, Crito, and Phaedo. The volume concludes with translations of three Socratic texts: Lev Tolstoy’s “Socrates the Greek Teacher” (1885) and “Grigorii S. Skovoroda” (1907) and Mikhail Epstein’s “All-Divergence: The Teachings of Iakov Abramov as Interpreted by His Disciples” (1984–1986), which stages the Socratic problem of authenticity and discipleship against the backdrop of twentieth-century Soviet intellectual history.

We began work on this volume during pandemic lockdown conditions in the spring of 2020, and completed it during the early months of war in the spring of 2022. Socrates in Russia traces the reception and reimagining of Socrates in the Russian philosophical, literary, and poetic tradition. The title of this volume does not imply, however, that the thinkers and writers addressed in this volume are “Russian” in any necessary sense. In most cases, the topics addressed within are deeply transnational. In a 1790 letter to his dear friend Mykhailo Kovalynsky, Skovoroda highlights his own “transnationalism,” referring to “my mother Little Russia and my aunt Ukraine”—a transnationalism that was, in his day, a mix of the languages, traditions, and cultures that formed his distinctive philosophical and lyrical output.

It has always been our intention for this project to be the first of several in this vein. One could readily imagine similar volumes—Socrates in Georgia or in Ukraine; Socrates in Rus’ or the Soviet Union; Socrates in Central Asia. There are as many Socrates as there are philosophical and literary approaches to his thought. Russia’s war against Ukraine have made these lines of inquiry all the more urgent. Even better would be a transdisciplinary project on “Global Socrates Studies,” to place in productive dialogue the ways that different cultural and intellectual traditions have crafted Socrates’ story to fit their own needs. Of course, any such project must also address the question of gender: of whether Socrates must be a man, and why the Russian philosophical tradition has produced dozens of Socrateses, but not a single Diotima of Mantinea, from whom Socrates claimed to have learned the art of eros (in the Symposium), or an Aspasia of Miletus, from whom Socrates said he learned the art of rhetoric (in the Menexenus).