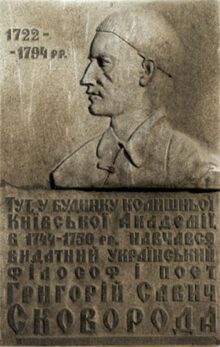 This is Part II of a three-part series on the edited volume Socrates in Russia, edited by Alyssa DeBlasio and Victoria Juharyan. Part I may be found here, and Part III will appear tomorrow, 11/10.

Through the end of 2022, Brill has made some chapters from Socrates in Russia available in Free Access.

Hryhoriy Skovoroda and the Freedom of Culture

Through the end of 2022, Erica Camisa Morale’s chapter, “The Poet Hryhory Skovoroda: Knowledge as a Process,” is available in Free Access here.

Erica Camisa Morale is a Dornsife Fellow in General Education at USC and specializes in seventeenth- and eighteenth-century East Slavic literature.

I became interested in the works and figure of Hryhoriy Skovoroda (1722–1794)—the earliest Socrates represented in the volume Socrates in Russia and, perhaps, the East Slavic Socrates par excellence—because he embodies in an exemplary way the essence of culture, which circulates freely and overcomes all human barriers.

The freedom of East Slavic seventeenth- and eighteenth-century culture reaches its zenith in the figure of Skovoroda—a cultural freedom that, nowadays, we would call transnational. Early modern East Slavic authors engaged in deep exchanges with both West European writers and other East Slavic writers. These were Polish, Ukrainian, Belarusian, and Russian authors who studied and taught in the same schools (the most important of them is probably the Kyiv-Mohyla Academy), collaborated in shared projects, translated Classical texts, developed systems of poetics, and engaged in artistic experimentations in a climate of collaboration that overcame contemporary notions of individuality and originality. These authors, furthermore, professed a variety of religious confessions (primarily, Orthodoxy, Protestantism, and Catholicism), claimed different ethnicities and nationalities (Belorussian, Polish, Russian, Tatar, and Ukrainian), and wrote in multiple languages (Church Slavonic, East Slavic dialects, Polish, Latin, and Greek).

Skovoroda represents this cultural freedom in his writings. Recognized as the first East Slavic philosopher and considered by Joseph Brodsky to be one of the major East Slavic poets, Skovoroda created a syncretic system of knowledge in both his philosophical dialogues and poems that includes the seemingly antithetical figures of Christ and Socrates, as well as Augustine and Epicurus. For this reason, scholars have connected his thought with a range of philosophical traditions, including Neoplatonism, Eastern patristics, Baroque Ukrainian theology, German mysticism, Pantheism, and Humanism. Skovoroda’s work and its reception is evidence of how enriching culture can be when it defies labels and boundaries.

I encountered Skovoroda when I was writing my doctoral thesis on early modern East Slavic lyrics. I was struck by the ethical consistency that characterized his life. Skovoroda lived his last twenty-five years as a wandering philosopher. He rejected any connections with institutions that limited his intellectual freedom and aligned his life as the embodiment of his thought, just as Socrates had done in ancient Greece. This is another reason for my fascination with Skovoroda: the link between life and culture that we perceive in his works, namely his conception of knowledge as an ethical, gnoseological, and ontological process that evolves through the subject’s own experiences. In my contribution to Socrates in Russia, I explore how, in his collection of poems, The Garden of Divine Songs, Skovoroda treats experiences, knowledge, and spiritual and ethical growth as one and the same thing, and how poetry can show us that very moment when they take their places at the meeting point of existence and thought.

Through the end of 2022, Vadim Besprozvany’s chapter, “‘Skovoroda’s Way’ in the Russian Symbolist and Post-Symbolist Tradition,” is available in Free Access here.

Vadim Besprozvany is a Lecturer at the University of Michigan School of Information. His research interests span the works and legacy of Vladimir Narbut, Gogol’s prose, poetics of travelogue, and the Slavic Baroque.

In the summer of 2021, I opened a message from the e-mail-based forum known among American Slavists as SEELANGS. The author of this message was offering for free a vintage two-volume edition of Hryhoriy Skovoroda’s works, which included comprehensive commentary that my own 1973 edition lacks. I responded immediately. Unfortunately, by the time I sent my email, the publication had already fallen into other hands. However, another list member, Alyssa DeBlasio, replied to my initial inquiry with specific intent. She wanted to learn why I was interested in obtaining Skovoroda’s two-volume collection. This email chain became the starting point in our shared journey to publishing the edited volume Socrates in Russia.

My research interests focus on the works of several “Ukrainians in Russian literature”: Nikolai Gogol, Vasilii Narezhnii, and Vladimir Narbut. Thus, I could not ignore the significant personality of the philosopher, poet, and sage Hryhoriy Savvich Skovoroda, whose name is linked inseparably with the Slavic Baroque, soul-searching, and the Ukrainian theme in general.

Here, I’ll start from the end—with the story of a Russian Silver Age poet of Ukrainian origin, acmeist Vladimir Narbut.

Being Ukrainians of gentry origin, the two schoolboys—the brothers Vladimir and Georgii Narbut (the latter would later become the “father of Ukrainian graphic illustration”)—nevertheless grew up under the influence of both their native culture and Russian modernism and symbolism. Of particular importance in forming their young talent were the few elegant publications of Vesy and the World of Art magazines that could be found in the provincial Glukhov library. Georgii fell in love with Ivan Bilibin’s graphic style, while Vladimir, in turn, counted symbolist poets Valerii Briusov and Andrei Belyi and modernist Ivan Bunin among his idols. Narbut entered the circle of the Acmeists, and gained the friendship and camaraderie of Nikolai Gumilev, Osip Mandel’shtam, and Anna Akhmatova. With the enthusiasm of a neophyte, Narbut began to develop his own bilingual style, using archaisms, Ukrainianisms, and dialectisms in his work.

“Observe humankind. It is a book that is black,” Skovoroda wrote in his parable “The Poor Lark.” Narbut used the same line as the epigraph to his poem “Portrait,” included in his most famous book, Alleluia (1912). This book is a small masterpiece of both poetics and printing. The author carefully planned the book’s design and embellishments à la Ukrainian baroque.

While working on my chapter for Socrates in Russia, I discovered that those who write about Narbut and Skovoroda do not account for the previous tradition of Skovorodiana in Russian culture. In their opinion, it was Vladimir Narbut who “revived” Skovoroda.

My chapter demonstrates how an interest in the personality, teaching, and works of the “Ukrainian apostle in postols” arose not only in Russian religious and philosophical circles, but also in poetic and literary circles. I start with an overview of Skovoroda’s reception and the philosophical controversies and debates surrounding his philosophy in the second half of the nineteenth century. Then I turn directly to literary influences. Starting with philosopher and poet Vladimir Solov’ev (incidentally, Solov’ev was Skovoroda’s great-nephew), I discuss the philosophical, linguistic, and poetic lessons that Skovoroda (through Solov’ev) passed down to the younger Symbolists Viacheslav Ivanov and Andrei Belyi. Skovoroda was a perpetual wanderer, capturing hearts and minds. Thus, in Belyi’s mysterious novel Petersburg, Skovoroda’s philosophy sends the protagonist “backward from Kant” and the perniciousness of Western philosophy altogether, leading him to a simple life. Vladimir Narbut places Skovoroda in the pantheon of the new icons of Acmeism, together with Gogol and Baudelaire. Velimir Khlebnikov, in his own right, imitated Skovoroda by embarking on a journey across the steppe. We can trace Skovoroda’s footprints in the works of the OBERIU poets.

In May 2022, while wrapping up edits on my contribution to Socrates in Russia amidst a stream of dreadful news from the Ukrainian front, I learned that the eighteenth-century estate where Skovoroda spent his final years, and nearby which he was laid to rest, was destroyed by Russian air strikes.

Hryhoriy Skovoroda is still here, invisibly, in our cultural memory. Our world has once again become the one that Skovoroda despised, described as “flesh and whips and tears.” No to war.