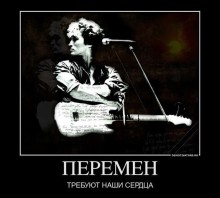 In all the fuss about Russia possibly invading Ukraine, a shocking revelation about Russian-American relations has gone all but unnoticed.  Long-dead underground rock idol Viktor Tsoi, the front man for the classic group known as “Kino,” sang songs that had been written for him in Hollywood at the behest of the CIA.  As part of a plot to destroy the Soviet Union.

Of course, this news will mean nothing to the average American.  But to Russians and Russia-watchers who are old enough to remember bootleg cassette tapes (but young enough only to have heard about rock recorded on Soviet X-ray film), the information is earth-shattering.  When he was alive, Tsoi was already a cult figure among 1980s Soviet rock fans; after his untimely death, he became the Russian equivalent of Jim Morrison.  Tribute albums continue to circulate, while his home and his grave are still the sites of pilgrimage.

The most obvious and most reasonable reaction is outrage.  Sadly, this accusation by Duma MP Yevgeny Fyodorov, fits all too well in the current Russian media context, where no conspiracy theory is too ridiculous, as long as it is patriotic and anti-Western. One wonders how the CIA decided that the way to undermine Soviet power was through the lyrics sung by a rock star who for years couldn’t even release an official recording.  Add to that the linguistic and musical skills involved, and we end up with a CIA whose power and effectiveness would bring joy to Dick Cheney’s latest heart and prompt him to shoot another friend in the face in celebration.

The particular song at issue here is “Changes” (Peremen), a 1986 anthem for a younger generation sick of hypocrisy and lies.  The liberal TV-Rain channel devoted an entire episode of “Kozyrev On-Line” to Fyodorov’s charges, with host Mikhail Kozyrev trading jokes with noted Russian rock critic Artemy Troitsky. Kozyrev closed his program by proudly affirming that, for him, “Changes” is more sacred than the motherland’s national anthem.  Strong words, certainly, but considering how many times that anthem has changed in the 28 years since the first performance of “Changes,” this is both a low bar and high irony.

Fyodorov himself has backtracked, taking the video down from his site and claiming he never said such a thing (fortunately, the CIA stooges at YouTube still have it here). But I wish he hadn’t.  Because Fydorov’s candor and insight have moved me to make a revelation of my own.  In my years of studying Russian popular culture, I stumbled upon a secret about Russia’s role in the world of American pop music.  I was determined to keep silent on the issue, because I didn’t want to inflame tensions between our two counties.  Now, however, all bets are off.

It turns out that the KGB (and its successor, the FSB) were instrumental in the creation and maintenance of the Western rock scene, particularly in the US and Britain, though we mustn’t forget Scandinavia (how else does ABBA begin to make sense?).

Their work was not easy, and it necessitated a proficiency with English and familiarity with the West that I would have though impossible, had I watched too many episodes of The Americans on FX.  The archives show that the KGB plucked a young folk singer named Robert Zimmerman from obscurity, changed his name to Bob Dylan, and quickly went to work creating songs that would puzzle many a generation (I’m still hunting for the transcript of the Soviet spy sessions that led to “Everybody Must Get Stoned”).

How did the Communists convey their messages in Western pop?  Part of it was the technology of “backwards masking,” the recording of hidden audio tracks that make sense only when played backwards.  Thus, while I’m indebted to the KGB’s Grateful Dead subcommittee for giving me so many formative experiences during my college years, I have yet to get over my shock at discovering the backwards-masked lyrics to “Uncle John’s Band”:

But backwards masking is only the beginning.  My hope is that further research will shed light on so many confusing moments in Western pop music, like how it is that Elton John sang “Hold Me Closer, Tony Danza” before anyone had ever heard of the future star of “Who’s the Boss?” There is even a chance that the lyrics to “Blinded by the Light” will finally make sense.

Even after the collapse of the Soviet Union, the Russian security forces continued their diligent work in American pop.  Experiments with computer-assisted translation led to the occasional misfire; Nirvana’s “Smells Like Teen Spirit” was actually intended to be an ode to the bouquet of thirteen-year-old vodka.  And the less said about their top-secret “Project Ke$ha,” the better.

Maybe now that the secrets are all out, there is a chance for a new musical detente between Russia and the US.  At the very least, the FSB and CIA could work together to create a new boy band.

Apparently, all you need is love.