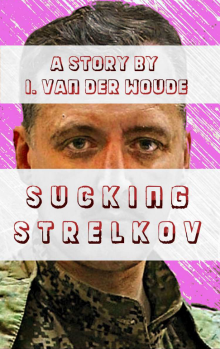 While it may be too soon to determine the lessons of the war in Eastern Ukraine, Amazon Digital Services has given us an early artistic response: I. van der Woude’s Kindle Single, “Sucking Strelkov.”   History repeats itself, first as tragedy, then as violent, self-published gay erotica.

Set largely in Donetsk in June 2014, “Sucking Strelkov” isn’t just ripped from the headlines; it has strip-mined them, resulting in all the aesthetic charm that the metaphor implies. “”Sucking” is the story of a European film crew that has come to Crimea to shoot adult movies (Gaza must have already been booked by competitors). To absolutely no one’s surprise, any plans for staging scenes of merry debauchery are scuttled by that pesky little war.

“Sucking Strelkov” puts its reader in an uncomfortable position, one only slightly more dignified that the pose suggested by the story’s title.  When I first heard about it, I knew I had to read it.  I’ve spent years writing about Russian pornography, sexuality, and mass culture, and particularly about the sexualized metaphors surrounding the relationship between the superpowers.

But I was soon faced with an ethical dilemma: the story is available only as a Kindle Single.  The combination of “Sucking Strelkov” and the Kindle is, of course, wonderfully ironic:  when Amazon chief Jeff Bezos appeared on The Daily Show to talk about the Kindle 2 in 2009, he seemed completely taken aback at the laughter greeting his assertion that the device is convenient for one-handed reading.

Even though I stopped buying paper books twelve years ago, I don’t like the Kindle; more important, I’ve been forcing myself to boycott Amazon over its strong-arm policies with book publishers.  Scholarship, however, is a higher calling, so I downloaded the book from Amazon, relishing the prospect of trying to get my university to reimburse the $1.93 I paid as a research expense.

As of yet, “Sucking Strelkov” has received only one Amazon review, but it is by n+1 co-editor and Russia watcher Keith Gessen, whose excellent recent account of visiting Eastern Ukraine now looks rather tame by comparison to van der Woude’s.  Otherwise, the most useful piece of information on the Amazon page is tha†t the story is 5700 words long.

It turns out that, in self-published erotica, size does matter.  Anyone who might be reading “Sucking Strelkov” for a sexual thrill should be aware that the first 4000 words or so are almost entirely sex-free. This is perhaps in keeping with the largely gendered marketing distinction between pornography and erotica (with “erotica” implying more plot and character development than a porn-seeking man could possibly want).   The bulk of the text treats us to brief chapters introducing the film crew (with particular attention to the female narrator and one of the photographers, “a guy only known as Schnoz.”

When we finally do get to the sex scenes, the most important feature is that they consist entirely of depictions of rape.  First, an unnamed Donetsk soldier, indicating Schnoz’s prominent, well, schnoz, assumes that the photographer must be not only Jewish, but an agent of Mossad.  Schnoz is stripped down, to reveal equally impressive proportions below the waist, and then forced to perform oral sex on the soldier while the narrator and her crew watch.

Finally, they are taken to Colonel Igor Strelkov, then still the leader of the anti-Kiev militia.  Without saying a word, Strelkov once again has Schnoz’s pants down, whereupon he whips out his own, much less impressive mini-Strelkov.  The colonel anally rapes Schnoz, then forces him to perform the story’s title act on his blood-soaked member.  Strelkov never says a word, or even makes a sound; the narrator, a veteran porn producer, remarks that she’s never seen a man so impassive during sex:  “this had all apparently held the same amount of interest and excitement for Strelkov as a completely routine bowel movement.”

“Sucking Strelkov” reminds us that pornography has its roots in satire, particularly political satire.  What better way to humiliate an opponent than to portray him in an embarrassing sexual encounter?  Vladimir Sorokin caused a scandal fifteen years ago with a novel that shows clones of Stalin and Hitler engaging in anal sex, and Gary Shteyngart has suggested that Sorokin’s biggest offense was making Stalin a bottom rather than a top.  Yet van der Woude, who hardly seems like a fan of Strelkov, makes him the rapist, not the victim (potentially sparing Strelkov the stigma of homosexuality by implicitly invoking the “no homo” clause covering tops in Russian prison sex).

If we put the story in a context not of civil war but of invasion, with Strelkov as a proxy for Russia, then the sexual choreography starts to make sense.  Invasions are often cast in terms of rape; making the victim a man in this case still leaves room for Ukrainian innocence (as presumably female victim), while deliberately focusing on the humiliation of Europe.  In attacking Ukraine, Russia is essentially invading Europe through its back door.

Meanwhile, Europe avails itself of a revenge that is entirely consistent with right-wing post-Soviet demonology: AIDS.  Nearly 150 years ago, Otto von Bismarck declared, “Russia has nothing to do in the West.  She only contracts nihilism and other diseases.” Other diseases, indeed.  Alas, Bismarck did not live long enough to read “Sucking Strelkov.”