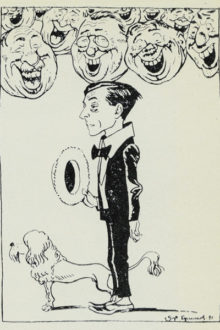 Editor’s Note: This week and next, All the Russias will be running a series of excerpts from Boris Dralyuk’s new translation of Mikhail Zoshchenko’s Sentimental Tales. This is Part II of the series; Part I may be found here.

Boris Dralyuk is the editor of 1917: Stories and Poems from the Russian Revolution (2016) and coeditor of The Penguin Book of Russian Poetry (2015).

Preface to the Third Edition

In view of endless inquiries we would like to inform you that the writer M. Zoshchenko’s role in this work has largely been confined to correcting orthographic errors and straightening ideological content. The greater part of the work belongs to the abovementioned author, I. V. Kolenkorov. And so, in reality, the book’s cover should have borne the name of Kolenkorov. However, I. V. Kolenkorov, not wishing to pass for a man of means, relinquished the honor to M. Zoshchenko. The fee, of course, went to Ivan Vasilyevich in full.

In the process of reporting this, we take the opportunity to declare that various sentimental undertones, whimpers, and a certain ideological vacillation in this or that direction ought not be attributed to the head of the literary circle, but, in part, to the author I. V. Kolenkorov, and, in part, to the personages depicted in these tales.

Here, in these pages, an entire gallery of now-departing characters will pass before your eyes.

The new, contemporary reader must know them, in order to see the departing way of life in all its manifestations.

Preface to the Fourth Edition

In view of past misunderstandings, the writer notifies his critic that the person who narrates these tales, is, so to speak, an imaginary person. He is a type—a middling intellectual who happens to live at the turn of two epochs.

Neurasthenia, ideological vacillation, major contradictions, and melancholy—that’s what we had to bestow upon our “promoted worker,” I. V. Kolenkorov. Whereas the author—the writer M. M. Zoshchenko, son and brother to unhealthy men of this same sort— has, for his part, put all that behind him. At the present moment, he exhibits no contradictions. His soul is clear, bestrewn with blossoming roses. And if these roses wither from time to time, if tranquility departs from his heart—it is for wholly different reasons, of which the author will write at some later date.

In this case, we are dealing with a literary device.

The author implores the honorable critic to keep this tangle in mind before raising a hand against the defenseless writer.