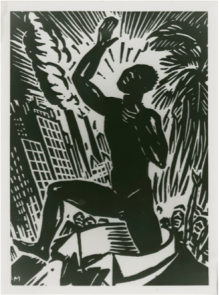 Jennifer Wilson received her PhD from Princeton University in the Fall of 2014.  She is currently a Lecturer at the Russian State University for the Humanities (RGGU).

As part of our “Legacies of the Harlem Renaissance” sub-unit (in which we trace its influence globally), one of the things we discussed at length was the important role that Harlem Renaissance writers played in inserting American anti-racist discourses into anti-colonialist ones abroad. To illustrate this, I devoted a class to “Negritude,” an anti-colonialist literary and ideological movement that emerged in Paris in the 1930s and 40s. It was led by French-speaking black intellectuals from French colonies in Africa and the Caribbean, most notably the Mariniquan writer Aimé Césaire, the Senegalese poet and future president Léopold Senghor, and the Guianan writer Léon Damas. We discussed the first volume of Negritude poetry edited by Senghor, Anthology of New Negro and Malagasy Poetry (1948), the so-called manifesto of the Negritude poetry. Jean Paul Sartre’s essay on Negritude, “Black Orpheus” [Orphée Noire],” served as the volume’s introduction.

Sartre’s essay spends considerable time problematizing the intersection of communism and anti-racist politics, asking, “Can the black man count on a distant white proletariat– involved in its own struggles?” Sartre writes against the idea that recognizing shared class struggle under oppressive capitalist structures will render “a privilege-less society in which skin pigmentation will be considered a mere fluke.” In other words, Sartre took issue with the Leninist idea that racism was merely a tool of capitalism that would naturally disintegrate under communism. Sartre insisted instead that racism was its own entity and that racial antagonisms within the proletariat– “the white worker benefits somewhat from colonialism in spite of it”—would need to be addressed first. I told the students that we would later in the course be hearing from African-American writers like Zora Neale Hurston and Audre Lorde who were less optimistic than Langston Hughes and Paul Robeson about the promises of Soviet communism for blacks in America, and that Sartre raises questions that they too would pose. We also discussed how the Soviet government’s failure to fully comprehend and articulate the racial and colonialist struggles of other nations opened up space for the nonaligned movement during the Cold War.

A central feature of Negritude poetry is a romanticized self-imposed primitivism that willingly exoticizes the black race in a gesture understood to be all at once anti-Western, anti-imperialist, and anti-capitalist. For instance, we looked at the woodcut cover of Leon Damas’ volume of poetry Pigments (1937), which features a totally naked black male stepping out of a tuxedo, supposedly shedding the restrictive “civilizing” efforts of white European society. We problematized this approach by reading critiques of Negritude from within the black diaspora which argued that Negritude relied too heavily on racist stereotypes to fashion its “New Negro” identity, and that its focus on “black” as a stable identity erased regional and linguistic differences within the African diaspora.

Then I had the idea to read with them Blok’s “Scythians” (1918), which similarly conflates non-white identity (in his case, Asian identity) with revolutionary anti-Western politics. The students agreed that “Scythians” functioned similarly to some of the Negritude poetry we read, particularly that by Senghor and Damas, but I then posed the question, “What about the fundamental difference here– Césaire and Senghor were black, but Blok is not Asian. How does that change things?” The response was, “Well he was sort of Asian.” I responded quite surprised– “What? What do you mean?” Then another student added, “Well, he thought he was.” The consensus among the students was—Blok was kinda sorta Asian the way that all Russians kinda sorta are… so the poem was not offensive. I discussed this with my colleague Emily Wang, who works on race and Blok, and she informed me that while Blok may have relied on Asian imagery to romanticize revolution, his relationship to actual Asians (and Russia’s own Asian identity) was highly ambivalent. She recommended Susanna Lim’s book on the subject, China and Japan in the Russian Imagination: To the Ends of the Orient, 1685-1922, which I hope to include in the reading if I have an opportunity to teach this class again.

One of the experiences I’ve had teaching this course, which I have been told is the first class on African-American culture at RGGU, is that I get a lot of requests to teach things that unfortunately do not fall within the narrow parameters a course on the Harlem Renaissance and its Soviet afterlife. One of the administrators at RGGU who oversees the class kindly asked if I could perhaps devote three weeks (of a ten-week class) to Toni Morrison, a request echoed by some of the students. Interestingly enough, one of my favorite quotes from Toni Morrison is from an interview she did with Charlie Rose where she discusses a critic who challenged her to write about something other than race. Her response– “Tolstoy writes about race all the time… and no one says well when are you going to stop writing about race?”

My solution was to assign parts of her novel Jazz for the unit we did on jazz music. Our primary text for this unit was the J.A. Rogers article “Jazz at Home.” Interestingly enough, J.A. Rogers was one of the first Americans to write about Pushkin specifically as a man of color, including him in his two-volume series World Great Men of Color. We talked about how Rogers describes jazz as something that rebelled against U.S capitalism—“[jazz] has become a safety valve for machine-ridden and convention bound society”– and yet, the Soviets saw it as synonymous with American capitalism and spread propaganda messages like this one shared by a student, “Today, he’s playing jazz, and tomorrow he’s selling out his country.” We talked about how this might reveal a potential problem in the Soviet’s Union’s race policy; how could they condemn jazz, the music of the supposed black proletariat? One of the students offered, “I think the Soviets were okay when black people were playing jazz, but not when white people were playing it.” She had a point. After all, Paul Robeson was allowed to sing Negro spirituals like “Steal Away to Jesus” in the atheist Soviet Union. I wondered though if the flexible nature of Soviet jazz policy was the result of hypocrisy or an ahead-of-its-time critique of cultural appropriation.

One of the surprising things about the J.A. Rogers article was its numerous references to Russian dance and Russian composers. The class’ personal favorite was when Rogers declared, “Jazz has always existed. It is in the Indian war dance, the Highland fling, the Irish jig, the Cossack dance.” The Cossack dance!? This was actually a really good lead-in to discuss how Russians were racialized in early American society as not “fully” white. In his article, Rogers includes a quote from the Russian musician Serge Koussevitzky who was among a growing cadre of Russian-Jewish jazz composers. I shared with the students a passage from the book Writing Jazz: Race, Nationalism, and Modern Culture in the 1920s in which Nicholas M. Evans explains that white-owned music establishments were often uncomfortable with black performers and conductors, and preferred Russian-Jewish ones, who they felt were white enough to civilize jazz, but not so white so as to be totally disconnected from black music. Evans writes, “The notion of Jews as mediators between black and white–especially Jews of Russian origin, whose reputedly ‘Oriental’ identity facilitated this status” was prominent. After saying to this the students, I quickly remembered that anti-Semitism is rampant in Russia, and that it was actually necessary at this point to say, “This is really awful and racist!” just so it was clear where I stood.

The class includes a number of students who are musically inclined, and they were really excited to talk about how jazz was used as a form of dissent in Soviet society. Then we talked about how hip-hop now plays a larger role in revolutionary politics. Particularly we discussed the wave of Ukrainian hip-hop ushered in by the Orange Revolution. We also listened to a remix of Nas’ classic “One Mic” that was put together by DJ Soulviet, a Miami-based Russian DJ who does mashups of songs by the rappers Nas and Common with Soviet soul and jazz sounds.

At the end of class, we went back to Toni Morrison, who was convinced of jazz’s inherent democratic properties. I asked them if they agreed. Was there something about the improvisational nature of jazz that fights ideological rigidity and liberates people conformity? The students countered with Roger’s own words—“if jazz had always been there, then shouldn’t the Cossack dance have already liberated us?”