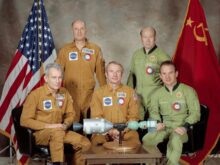 Dr. Andrew Jenks is a Professor of History at California State University, Long Beach, and author of books on Yuri Gagarin, Palekh lacquer boxes, environmental disasters, and the forthcoming from Anthem Press: When the Space Race Ended: Collaboration in Space and the Search for Peace on Earth.

The Soviet ASTP docking engineer Vladimir Syromiatnikov became obsessed with the idea of androgyny following the adoption of his androgynous docking mechanism, “APAS”. He named his dog “Apasik.” After the Soviet Union collapsed, he produced a line of vodka called Apasnaya — a play on the Russian word for dangerous, “opasnyi/ opasnaia” — and trademarked the term “Androgynovka” for his vodka line. He incorporated androgyny into his daily conversation, regaling two poor American women at a Houston party after a day of working on APAS in 1973 with stories “about androgynous creatures and structures that, according to the myths of ancient Greece, were miracle workers.”

But try as they might, neither the Soviet nor the American side was able to communicate the central idea of parity that the mission and the androgynous docking mechanism were explicitly designed to convey. In the United States, the dominant narrative was one of being “screwed” — quite literally — by the Soviets, a storyline illustrated in the December 1975 issue of Playboy. The magazine ran a story with accompanying images that expressed in graphic and explicit terms a common zero-sum view of American-Soviet relations that ultimately hastened the demise of detente. The article was part of a special section presented in the style of National Geographic magazine called National Pornographic (the “journal of the National Pornographic Society.”) The ASTP-related article is titled: “Historic Emission in Space.” The caption for the docking image reads: “US crew sends message to Soviet craft: ‘Is it in yet?’” The image shows a naked man (the Soviet Union) mounting a naked woman (the US) from behind and on top. The caption reads: “East meets West in the vast, weightless reaches of outer space. Soviet cosmonaut radios, ‘My bird has landed!’ while pretty U.S. astronaut muses aloud: ‘I wonder why this reminds me of the U.S. Soviet grain deal.’”

The ASTP engineers had worked painstakingly to engineer the flight in a way that would remove the implication that one side, the “male,” was dominating the other, the “female,” but that message was completely lost on much of the American public. In the Playboy issue, ASTP was interpreted as a dangerous give-away of American technological superiority that also had put the US into a vulnerable position, with the USSR “taking the US from behind.” The reference to the grain deal — a controversial taxpayer subsidized sale of US grain to the Soviets as part of détente widely panned as a gift to the communist enemy — reinforced the connection between the flight and American humiliation.

This episode presents a stark reminder of the difficulty of changing political culture from a zero-sum mentality in the Cold War to a win-win proposition. The purposeful design of androgynous docking latches that would obviate the need for a “mama-papa” docking was completely ignored in favor of the narrative of domination and subordination. The Playboy article noted:

The first coupling in outer space was a fitting climax to the joint venture undertaken by the United States and Red Russia. Commie space technicians successfully completed docking maneuvers by inserting their vehicle into the opening of the American module, although NASA officials had insisted that the Bolshevik vehicle be provided with a heat-resistant sheath (painted bright red, of course) – for the prevention of disease only. Inside the U. S. capsule, cosmonaut and astronaut joined in a historic embrace that will be remembered as one giant schtup for mankind.

The contrast between US and Soviet attitudes was striking. One of the most popular magazine images of ASTP was in the Soviet satirical magazine Krokodil. Its July 1975 issue had a cover which showed the two capsules meeting together over Earth. As the androgynous docking latches come together over Earth, they squeeze the mid-section and groin of a Trojan Warrior, who is forced to drop his sword. The warrior is labeled “Cold War.” The representations of the capsules clearly convey the androgynous docking mechanism in which neither side penetrates the other, and in which the end result of the non-penetrating docking is peace. The contrast between the Krokodil and Playboy images says much about the very different public attitudes that framed the Cold War.

In 1983, Ronald Reagan signaled the definitive end of US-Soviet détente through the Strategic Defense Initiative. Whereas Richard Nixon had started his presidency with the idea of space collaboration, Reagan began his with remilitarization and a renewed attempt to shift from a horizontal and back toward a vertical orientation in American-Soviet relations. Gaining a position above one’s enemy, armed with a laser shield, was evidently meant to produce a kind of erectile dysfunction in the Soviet Union’s arsenal. In short, the engineering of androgyny could not transcend the patriarchal ideas that drove international relations. Cold War politics in the United States were broken in a way that technology was unable to fix.